Ashford Hospitality Trust (NYSE:AHT) is a real estate investment trust, or REIT, specializing in hotels. While I like REITs, and especially hotel properties, as long-term investments, Ashford's 7% dividend yield is well above that of its peers, and its valuation is ridiculously low -- so is it too good to be true?

As of June 30, 2016, Ashford owned 127 hotel properties, about half of which (by income) are Marriott-branded. 27% are operated under Hilton brands, and the rest are Hyatt, IHG, and Starwood brands, or are independent hotels.

The portfolio is geographically diverse, with no market making up more than 10% of the total EBITDA, and most of the properties concentrated in various attractive urban markets.

Ashford's strategy is simple enough -- to invest in full-service upscale hotels, with a particular focus on franchised properties, where there is significant value to be unlocked. To illustrate this, Ashford used the example of its Marriott Freemont acquisition and subsequent management change in its latest presentation. After acquiring the property and implementing some strategic changes in operations, revenue increased by 15.7% and EBITDA margins grew from 20.9% to 30%, based on the 12 months before and after the acquisition.

While the results look promising, it's important for investors to be aware of Ashford's high debt load. Out of the company's total capitalization of $5.12 billion, $3.9 billion, or about 76%, is debt. While using high levels of mortgage debt to finance real estate can certainly result in higher income, and therefore higher dividends, it also leaves the company more susceptible to fluctuations in rental income and property values.

Furthermore, 72% of Ashford's debt is floating-rate. Sure, the current weighted average interest rate of 5.2% seems pretty reasonable, but if mortgage rates were to spike, the company could see its debt payments jump quickly. For example, $412.5 million of Ashford's debt matures in December 2017 and is at a floating interest rate of LIBOR + 5.52%. While the LIBOR is less than 1% currently, this isn't too bad, but if the three-month LIBOR were to spike to, say, 5%, the interest on this debt would be in excess of 10% and could become a burden.

If you don't think such a spike could happen, take a look at the LIBOR's history -- particularly the spike from about 2004 to 2007. 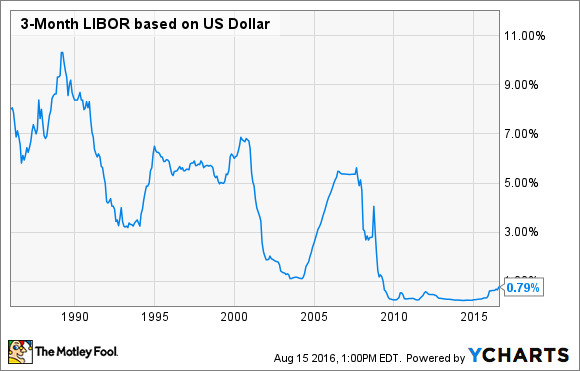 Is that dividend sustainable?

Ashford currently pays a 7.1% dividend yield, which is on the high end, even for REITs, and the company is currently earning enough income to comfortably cover the dividend.

The problem is that the company's FFO is entirely dependent on continuing low interest rates. If rates were to spike, or if Ashford's operating income were to take an unexpected hit -- for example, if a recession were to hit and upscale hotel revenue took a nosedive -- Ashford's profitability could plunge, or even disappear altogether.

Here are some numbers to consider. During the first six months of 2016, Ashford generated adjusted FFO of $108.3 million for its shareholders, which is the best measurement of a REIT's "earnings" and therefore its ability to pay dividends. However, its interest expense during those six months was $100.1 million. If the interest expense were to spike by, say, 20%, it would cause FFO to drop by nearly 19%.

On the other hand, consider retail REIT Realty Income (NYSE: O), which I consider to have an excellent balance sheet. During those same six months, Realty Income paid $118.1 million in interest, but generated $356.8 million in adjusted FFO. If we use the same assumption of a 20% spike in interest expense, it would result in just a 6.6% drop in AFFO for Realty Income. Now, I realize this isn't an apples-to-apples comparison, but it does illustrate the susceptibility of Ashford Hospitality Trust's profitability to its debt load.

In a nutshell, Ashford's dividend makes sense and is sustainable for now. And, if we take Ashford's first-half AFFO and annualize it, the company trades for an unheard-of valuation of just 3.7 times AFFO. However, I wouldn't exactly call its future "secure."

Even though Ashford's low valuation helps to make up for the risk, the company simply carries too much debt for my tastes. I'll stick to REITs that generate less income and pay less in dividends, but who consistently increase their payments every year and could easily cover their dividends (and interest payments) if interest rates were to spike, or an unexpected revenue drop were to occur.