Apple (NASDAQ:AAPL) reported earnings for the quarter ended in June, which is the third quarter of fiscal year 2016 for the company, on July 26. The stock has gained nearly 13% since then, rising from $96.7 per share to nearly $109.3 as of the time of this writing. In terms of market capitalization, this means that Apple has added approximately $68 billion to its market value after reporting earnings.

This impressive performance over a relatively short period of time cannot be attributed to one single factor. However, Apple CEO Tim Cook said in the post-earnings conference call that demand for the iPhone SE outperformed expectations, and the device is particularly successful at attracting new customers to the Apple ecosystem. This is clearly good news for investors in Apple, and arguably one of the main reasons the stock is doing so well.

What Apple's CEO wants you to know

Apple launched its iPhone SE model in March, and the 4-inch device is considerably cheaper than previous iPhone models. The iPhone SE has a starting price of $399 without a two-year contract. (As a reference, the iPhone 6s starts at $649.)

Apple devices are typically much more expensive than products from the competition, and this can be a major disadvantage for the company in competitive terms. This is especially relevant in emerging markets, where income levels are much lower than in the U.S. and the carrier subsidy business model is not as prevelant

The iPhone SE substantially reduces Apple's pricing disadvantage in smartphones, so it could be a powerful move to attract new customers to the Apple ecosystem. In fact, that's one of the main reasons Apple launched the product in the first place.

According to Tim Cook, demand for the iPhone SE exceeded supply during the June quarter. The company managed to balance demand and supply in September, and this bodes well in terms of sales going forward. Importantly, the iPhone SE is bringing in plenty of new customers to Apple, when it comes to both first-time smartphone buyers and switchers from other platforms.

Cook provided a lot of detail on the launch of the iPhone SE:

We had a very successful global launch of iPhone SE and demand outstripped supply throughout the quarter. We brought on additional capacity and were able to achieve supply-demand balance as we entered the September quarter. At its launch, we said that the addition of the iPhone SE to the iPhone lineup placed us in a better position to meet the needs of customers who love a four-inch phone and to attract even more customers into our ecosystem. In both cases, that strategy is working. Our initial sales data tells us that the iPhone SE is popular in both developed and emerging markets and the percentage of iPhone SE sales going to customers who are new to iPhone is greater than we've seen in the first weeks of availability for other iPhones launched in the last several years.

Overall, we added millions of first-time smartphone buyers in the June quarter and switchers accounted for the highest percentage of quarterly iPhone sales we've ever measured. In absolute terms, our year-to-date iPhone sales to switchers are the greatest we've seen in any nine-month period, and our active installed base of iPhones is up strong double digits year-over-year.

The iPhone 6 was an extraordinary success for Apple in 2015. Many customers were eagerly awaiting a iPhone model with a larger screen size, and the iPhone 6 was a game changer in that area. During fiscal year 2015, Apple sold over 231 million iPhones, an impressive increase of 37% versus fiscal 2014.

Most customers don't upgrade their iPhones every year, so massive sales in 2015 represent quite a challenge for Apple in 2016. To put the numbers in perspective, the company sold 40.4 million iPhone units in the third quarter of fiscal 2016, which is a 15% increase versus the same period in 2014, but still down by 15% versus the third quarter in fiscal 2015. 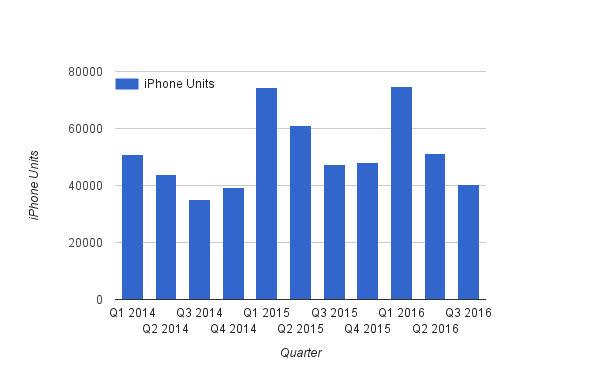 The fact that the iPhone SE is attracting new customers to the Apple ecosystem shows that Apple can gain ground versus lower-priced competitors, reducing the company's dependency on renewal sales. Besides, Apple users are typically very loyal to the brand, so chances are that a considerable share of these new iPhone buyers will continue being Apple customers in the future.

In a nutshell, the iPhone SE is not only selling better than expected, but it's also attracting lots of new customers to Apple's famously sticky ecosystem of products, services, and applications. This has strong positive implications for investors in Apple going forward.