Warren Buffett famously told investors to "be fearful when others are greedy, and greedy when others are fearful." But with the S&P 500 at historic highs, it might seem tough to find beaten-down stocks that are worth "getting greedy" over.

However, one hated stock might deserve your attention -- analog semiconductor manufacturer Skyworks Solutions (NASDAQ:SWKS), which has fallen nearly 25% over the past 12 months. 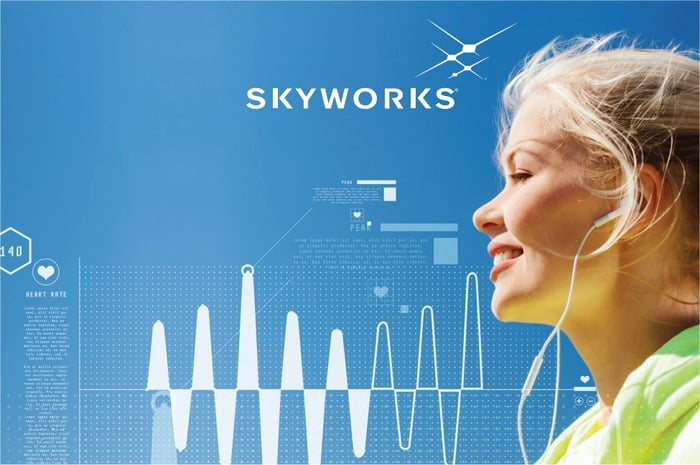 How does Skyworks Solutions make money?

Skyworks is best known for supplying RF chips for Apple's (NASDAQ:AAPL) iPhone, Samsung's Galaxy devices, and a wide range of other mobile devices. Its other analog semiconductors are used in the automotive, broadband, wireless infrastructure, wearable, home automation, industrial, medical, and military markets.

That makes Skyworks a potential long-term play on the Internet of Things (IoT), which connects objects to each other and the internet. Cisco estimates the number of connected devices worldwide will grow from 25 billion in 2015 to 50 billion in 2020, which indicates that demand for its analog chips could rise over the next few years.

However, the RF market has been tough over the past year due to slowing demand for smartphones. Last year, Skyworks disclosed that "one customer" (assumed to be Apple) "accounted for greater than ten percent" of its revenue. Oppenheimer & Co. analyst Richard Schafer estimates that percentage could actually be as high as 35% to 40%. Qualcomm's (NASDAQ:QCOM) RF joint venture with TDK also poses a looming threat, because it aims to launch new RF chips, sensors, and wireless charging tech for smartphones, drones, and other devices. If Qualcomm bundles those components with its SoCs, demand for Skyworks' One Mini modules could take a hit.

How is Skyworks diversifying its business?

Between 2011 and 2015, Skyworks' IMS (integrated mobile systems) business grew from 20% of its top line to 52% -- indicating that it's become overly dependent on the smartphone and tablet markets. But over the long term, Skyworks expects the weight of those businesses to decline as growth in IoT, connected cars, wearables, and other markets take over, as seen in this chart from its investor presentation in May.

To tap into those markets, Skyworks scored more design wins in smartwatches, home automation systems, drones and connected cars over the past year. Skyworks believes that it will sell more chips for set-top boxes and media gateways, which will increasingly serve as the "hubs" of smart homes. Skyworks also expects 4G upgrades to boost its content share across mobile devices, since 4G devices require more of its analog chips than 3G ones. The number of monthly 4G subscriptions worldwide could surge from 500 million in 2014 to 3.7 billion in 2020, according to Ericsson.

But how fast is Skyworks growing today?

Skyworks' long-term growth plan looks promising, but its sales growth has slowed dramatically over the past year, and concerns about the iPhone persist.

The near term outlook looks murky, with Skyworks expecting a 5.7% decline in sales for the fourth quarter and analysts projecting just 0.8% growth for the full year. But looking further ahead, analysts expect content share gains in mobile devices and new design wins to boost its revenue by 7.5% next year. If iPhone 7 sales top expectations and Chinese smartphone demand stabilizes -- which many analysts aren't factoring into their estimates -- sales might rebound at an even faster rate.

Skyworks' non-GAAP net income fell 9.3% annually to $238.1 million last quarter, and GAAP net income declined 10.8% to $185 million. For the current quarter, Skyworks expects its non-GAAP earnings to fall 5.9% to $1.43 per share. But things look better down the road -- analysts expect higher sales, margin expansion, and buybacks to boost its full-year earnings by 5% this year, 11% next year, and grow at an average rate of 17% over the next five years.

Those estimates give Skyworks a 5-year PEG ratio of 0.7. Since a PEG ratio under 1 is considered undervalued, the stock looks like it's trading at a 30% discount to its long-term earnings growth potential. Skyworks' smaller rival Qorvo has a PEG ratio of 0.8, while larger analog peers Broadcom and Texas Instruments have ratios of 1 and 2.3 respectively .

If you believe that Skyworks' diversification across the IoT market and growing content share in hubs and 4G devices will pay off, the stock could be a great contrarian buy at current prices. However, I'd personally like to see Skyworks exhibit more signs of annual, not sequential, improvement in sales, margins, and profitability before I "get greedy" with this out-of-favor stock.