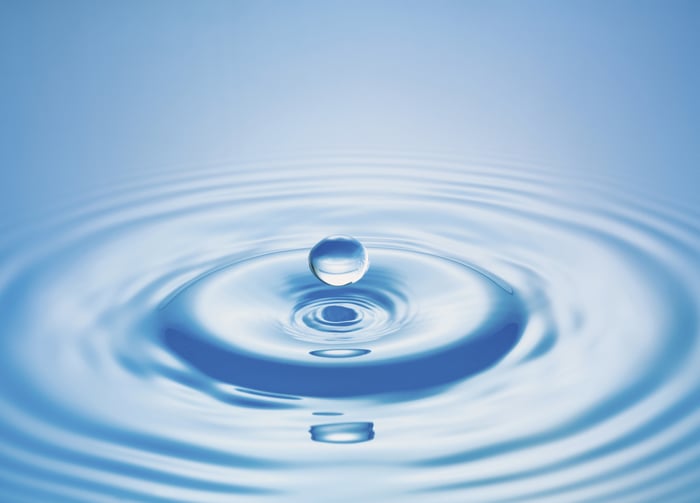 Earnings releases usually don't provide much color about a company's performance or future prospects. A wealth of information is shared in the analyst conference calls following these releases. Here are three key things that you should know from American Water's Q2 call. (Transcript via Thomson Reuters.)

Things are looking up for Keystone Clearwater

[D]rilling activity [for natural gas] is picking up in the Marcellus and Utica formations where our Keystone Clearwater subsidiary provides water services. ... [W]e continue to see Keystone as being EPS [earnings per share] neutral for the year. ... [O]ur market share continues to increase and is now around 35% of the water services market in the Appalachian [B]asin.

Keystone supplies water and related service to natural gas exploration and production companies working in the Appalachian Basin. Aqua America (NYSE:WTRG) was the first publicly traded water company to enter -- or at least substantially so -- the hydraulic fracturing, or fracking, water supply space. It was quite a lucrative business before the huge downturn in the energy markets started about two years ago.

As Story noted, natural gas companies are picking up their drilling activities, which is due largely to the rebounding price of natural gas. Management is optimistic about Keystone's prospects once the recovery in the natural gas market makes further progress.

While American Water expects Keystone to have a neutral effect on earnings this year, it expects it to be cash flow positive. Moreover, Keystone continues to gain more customers, with its market share of the water supplied to the natural gas companies working in the Appalachian Basin increasing from about 30% last quarter to 35% in Q2. So, when the market does make further progress in its recovery, Keystone should capture more of the profit pie.

CFO Linda Sullivan spoke about the anticipated effects of this year's summer weather:

[W]eather impacts in July are expected to be minimal, as the hot temperatures across many of our states were also accompanied by rain fall.

It's naturally a positive that the higher-than-average temperatures in many parts of the country in July aren't expected to have a notable negative impact on American Water's financials thanks to the smiling of the rain gods.

This topic illustrates one of the company's main competitive advantages: its geographic diversity. American Water is by far the most geographically diverse water utility. It operates in 47 U.S. states and one Canadian province, and operates as a regulated utility in 16 of these states. Its two largest competitors by market cap, Aqua America and American States Water (NYSE:AWR), operate in eight and seven states, respectively, though the vast majority of American States' business is in California, where it operates its sole regulated business.

One important benefit of this geographic diversity is that it makes American Water less vulnerable to drier-than-usual weather or droughts, which can pose challenges to water utilities because these conditions dry up water supplies. California's devastating drought, now in its fifth year, has had a sizable notable negative effect on American States Water's financial results.

A competitive advantage reflected in a soon-to-be acquisition

On Tuesday [Aug. 2], the citizens of Blue Grass, Iowa voted an overwhelming 86% majority to join the Iowa American family. Subject to a final agreement and regulatory approval, these 720 customer [water] connections in Blue Grass will join the 730 new customers in Yes Communities, Iowa which closed earlier this year. These two additions result in a 2.3% growth from acquisitions over the 63,000 customers we had in Iowa at the end of 2015.

The above snippet illustrates a larger point: American Water Works' geographic diversity provides it with a competitive advantage in the acquisition process. The company's Iowa subsidiary has a water supply line about 2 1/2 miles from Blue Grass that it will extend into the town, the QC Times said, quoting a company spokesperson.

Neither Aqua America nor American States Water could ever provide a competitive bid to acquire the assets of this water system because of how far away their nearest operations are located. Even if there are smaller water companies operating nearby, they're likely not going to have the resources needed to make the necessary upgrades -- a key reason for the sale.

Summarizing in a drop

In short, while American Water Works has other things going for it, its industry-leading size and related geographic diversity are its primary competitive advantages.