Investors in package delivery companies United Parcel Service (NYSE:UPS) and FedEx Corporation (NYSE:FDX) are likely pleased with 2016 so far. In a year when global growth has disappointed, both stocks have outperformed the S&P 500, partially because of both are taking advantage of positive trends in e-commerce growth and the ongoing strength of the consumer.

UPS, in particular, has been firing on all cylinders as of late. With this in mind, let's take a look at UPS's recent earnings call and five ways management is adjusting to circumstances. 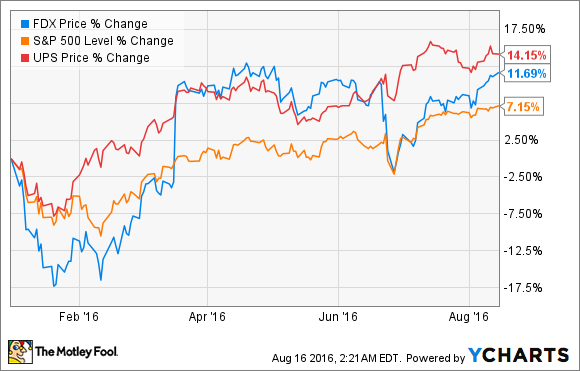 While industrial conditions have been tough in 2016, UPS and FedEx continue to see strong trends with e-commerce growth, and in particular on the business-to-consumer (B2C) side. UPS CEO David Abney began the earnings call by outlining how "U.S. Domestic business is growing operating profit on higher B2C demand." Meanwhile the consumer market in the U.S. remains healthy, and e-commerce forecasts have been "elevated for 2016."

In short, these positive trends have helped offset the negative effects from weakening industrial production and global GDP growth. Indeed, despite weak industrial conditions, the retail sector actually helped UPS's business to business (B2B) grow slightly in the quarter, according to CCO Alan Gershernhorn. For reference, B2C makes up 45% of UPS's current business.

If B2C and e-commerce are the growth opportunity in 2016, it makes sense that UPS and FedEx should be investing in them. Abney outlined how new technology features with UPS' 'My Choice' initiative -- a service that allows customers to schedule deliveries -- would allow customer to track their deliveries "using real-time maps."

In addition, the Access Point locker program -- UPS delivers packages to a local Access Point, from which customers can then pick up items -- is being expanded in "several major U.S. markets," according to Abney. Later, Gershernhorn would outline expectations to end the year with about 27,000 global Access Points, from around 25,000 at the moment.

FedEx is significantly ramping its capital expenditure in 2016 largely in order to expand capacity for e-commerce deliveries, but UPS is also expanding network capacity. Equally important, UPS is investing in technology to make its network operate more efficiently.

For example, a "multiyear investment strategy in hub automation" is in place, according to CFO Richard Peretz. New projects have been announced in major states such as California, Colorado, Illinois, and Texas, and UPS President of U.S. Operations Myron Gray described an ongoing process of investment: "You've heard about some of the cities that we introduced earlier in Richard's comments. Our goal is to automate the top Tier 1 hubs, and there is approximately 30 of them in the U.S. That process is as much as 60% of our volume."

UPS describes ORION as "arguably the world's largest operations research project." Simply put, it's a program that uses telematics and algorithms to "provide UPS drivers with optimized routes." When asked about productivity improvements due to ORION, Gray talked of "more than eight miles per driver in savings," and outlined his expectation that ORION, or at least what UPS calls Phase 1, will be "100% fully deployed by the end of 2016." According to Gray, "Phase 2 will actually begin in the back half of this year, well into 2017, and we hope to have the Phase 2 completed by 2017."

Peretz talked of margin expansion thanks to ORION, and Abney declared he was "very positive about ORION" and the return on investment it's generating for UPS.

It wouldn't be a UPS earnings call without a question about the perceived threat from Amazon. In response to an online question referring to a "large e-commerce shipper" taking charge of more of its own deliveries, Abney responded:

It's not unusual for any of our large shippers to make decisions whether they are going to outsource or in-source different parts of their business. Our focus is our diverse customer base, just makes it so difficult for any one company to be able to match our density no matter their size.

In other words, it might make sense for Amazon's business model to make deliveries, but there is no way the online retailer will ever build an integrated network to fully compete with UPS and FedEx. It's also worth noting that the package delivery companies want to optimize profitability with deliveries, while Amazon may be willing to make less-profitable deliveries for wider business purposes.