Department stores Kohl's (NYSE:KSS) and J.C. Penney (OTC:JCPN.Q) have had a tough multiyear stretch. The busy back-to-school shopping season is ramping up. Could a busy fall quarter help the companies right the ship? Which one is a better buy? 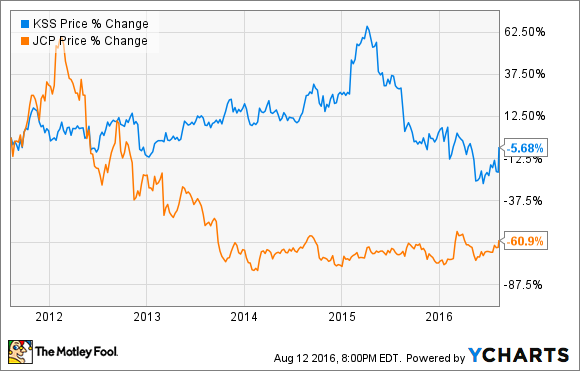 KSS and JCP data by YCharts.

Kohl's is stuck in a rut

Kohl's stock has been in steep decline since a March 2015 peak, with both sales and profits in decline. During the second quarter, total sales fell 2%, led by a comparable-store sales decrease of 1.8%. Total profit finally got some reprieve during the quarter, up 8% year over year, as the company was able to slash costs and manage inventory better. Through the first six months of the year, though, profit is down 39% from the same period the previous year.

This is not a new problem facing the department store. Annual revenue has been flat since 2012, and profits have been in decline since 2011. In a fight against the growing popularity of internet retailers, the company has had to increasingly rely on discounting to keep traffic coming in the doors.

While investors may be happy to see the slide in profits let up for the time being, growing overall sales has been a problem management has yet to figure out.

Leading the company's efforts has been the online store. The company reported during its most recent conference call that "online generated demand achiev[ed] a midteens increase." Kohl's also reported that active and wellness products are now its biggest category, making up 18% of total sales. To build on that success, the company has been building FILA brand sports stores featuring Kohl's exclusive products. It ended the quarter with 12 FILA Outlet stores.

Kohl's previously launched Stride Rite shoes and "relaunched" the New Balance brand, and noted success there in the recent conference call, and it will add Under Armour gear to its lineup in 2017. The former two could help during the back-to-school season(NYSE:UAA).

The company is still looking to get back to profitability, but much progress has been made in the past 12 months. The second-quarter loss was $56 million, a 52% reduction from the loss a year ago.

What is working for J.C. Penney? Management says it has been stealing market share from other department stores. While the company's efforts to refresh or relocate old stores is contributing, most of the success has been attributed to the opening of Sephora cosmetic stores inside J.C. Penney's locations. "... we continue to see strong performance in our existing and new Sephora inside JCPenney shops," said CEO Marvin Ellison in the most recent conference call. "We opened another 27 new locations during the quarter, bringing ... our total number of Sephora locations to 574. ... We also plan to open four more locations later this fall. The performance in both our new and existing locations continues to be outstanding."

Footwear and other activewear have also been big sellers for the chain and are expected to be big draws during the fall. Also recently announced was the addition of appliances to the home section. Management said it's pleased with results thus far.

J.C. Penney has been late getting sales online, but efforts to get up to speed continue. Because of continued spending to incorporate digital sales in the business model, the company sees online sales as a drag on profitability efforts in the short term.

Going into back-to-school season, management reaffirmed estimates for 2016. Comparable-store sales are expected to be 3% to 4% higher than 2015, with losses continuing to decrease.

The back-to-school better-buy winner is ...

J.C. Penney, with an improving outlook after a few years of struggles, looks like the better buy as we head toward fall 2016.

Kohl's is still looking for the right formula to get business back on track, and until there are signs something is working, I'm leery. Expectations are profits will start to reverse the trend later in the year, but with sales and comparable-store sales in decline, long-term prospects will remain modest at best.

J.C. Penney, on the other hand, is making headway with its rebound. Though profitability is still elusive, the company has a plan to get back to that point over the next few years through increasing sales and debt reduction. Rather than try to catch a falling knife, investors would be better served making a bet on a company already on the mend.