What does a company need to reach a $1 trillion market cap?

First and foremost, a company needs a massive market opportunity into which it can grow. The company also needs to be one of the most, if not the most, dominant players in its market. And in the wake of a highly successful earnings seasons, it just so happens that tech giants Apple (NASDAQ:AAPL), Alphabet (NASDAQ:GOOG) (NASDAQ:GOOGL), and Amazon (NASDAQ:AMZN) all find their valuations within the vicinity of a half-trillion dollars. 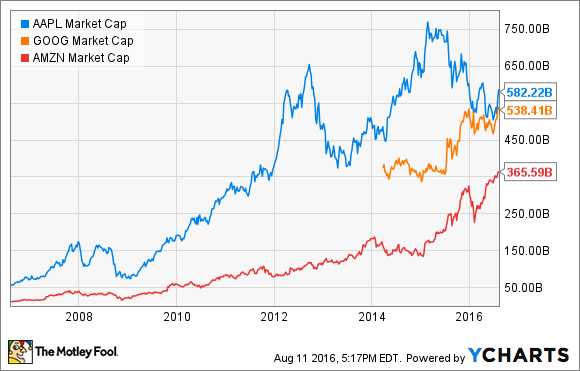 As such, let's quickly review each name that could plausibly compete to become the first member of the "four comma club" (Silicon Valley fans?).

Apple: a product cycle or two away?

Let's start with Apple, the world's largest company by market cap. Plainly stated, Apple simply oozes money. As just one example, Apple's $18.4 billion profit in its FY2016 Q1 stands as the most profitable quarter ever on record, and it's this combination of size and profitability that make Apple a plausible candidate to surpass this mammoth milestone first. However, the problem for Apple lies in driving enough revenue and profit growth to propel its shares the roughly 75% higher they will need to climb to reach the rarified air of a trillion-dollar company.

That difference might sound minuscule, but for a company of Apple's sheer magnitude, achieving such material growth is no small feat, especially when the market sees little growth on the horizon, as evidenced by its current 12 times trading multiple. That being said, there's certainly an identifiable case for Apple to be the first company to set this record in the medium to long term, thanks to two possible big-ticket catalysts.

First, Apple's rumored 10th anniversary overhaul of the iPhone could help spur the largest refresh cycle in smartphone history, though such rumors remain speculation more than one year away from its possible launch window. Further out, Apple's rumored electric vehicle effort -- Project Titan -- could also trigger the kind of massive revenue windfall necessary to drive Apple's valuation above $1 trillion. To be clear, Apple is certainly a plausible candidate, here, but it needs at least one new home-run product to surpass this historic mark.

Like Apple, Alphabet is another profit-printing, market-dominating titan. As the most dominant name in online advertising today, Alphabet's place at the epicenter of this secular growth industry bodes well for its stock's long-term outlook.

Case in point: A recent research report from Bank of America calls for Alphabet to continue to grow its revenues and profits at above-average rates through at least 2018. The research report expects sales and profits to each rise roughly 16% in each of the next two years, calling for FY 2018 revenues of $96 billion and net income of $31 billion. Assuming its trading multiple remains unchanged at 29 times -- itself not a given -- Alphabet's market capitalization will reach somewhere in the ballpark of $950 billion, placing it within easy striking distance of a $1 trillion valuation.

Seen this way, Alphabet achieving a $1 trillion valuation appears to be only a matter of time. However, when it comes to picking a company that I believe can not only reach a $1 trillion valuation, but also grow appreciably beyond this impressive threshold, e-commerce giant Amazon.com offers the most long-term upside potential, in my estimation.

Thanks to the preposterously large growth potential inherent in disrupting the retail and computing infrastructure industries, Amazon's long-term growth trajectory remains arguably the most substantial of the three tech giants discussed here.

Keep these figures in mind. Researcher eMarketer estimates that by 2018, global retail sales will surpass $28 trillion dollars, but e-commerce will represent only 5.5% of those sales. Through programs like AWS or its rumored global logistics service, Amazon continually finds ways to lower its cost basis. This virtuous cycle -- known as its Flywheel strategy -- enables Amazon to compete for ever-greater pieces of e-commerce market share. This enduring trait should help allow Amazon to continue to consolidate e-commerce market share for the better part of the next generation. I see few reasons Amazon cannot or will not become the online Wal-Mart to the world, even as Wal-Mart itself finally gets its act together to challenge Amazon.

Similarly, Amazon's AWS cloud business enjoys massive growth potential. IDC estimates the market for corporate spending on infrastructure-as-a-service (IaaS) spending alone will reach $141 billion by 2019. Considering Amazon's AWS just reached a $10 billion annualized run rate, Amazon's leadership space in the cloud combines with its e-commerce growth opportunity to create a company with a long-term growth horizon that should be able to power its market capitalization upward for years and years to come.

To be sure, Apple and Alphabet both offer investors plenty to like, but I see Amazon as the tech company with the most favorable outlook to reach and grossly surpass a $1 trillion valuation in the decades to come.