Williams Companies (NYSE:WMB) made headline after headline earlier this year thanks to its tumultuous merger agreement with rival Energy Transfer Partners (NYSE:ET). However, now that the deal is dead, Williams is refocusing its attention on its own future. That future is very compelling, according to CEO Alan Armstrong, because its MLP Williams Partners (NYSE: WPZ) has several major investment projects under way that are expected to drive robust cash flow growth in just a few short years.

On Williams' second-quarter conference call, Armstrong highlighted the progress the company made in several areas to strengthen its business amid the current energy market downturn. However, as important as those initiatives were, he said:

The really big takeaway that investors should have here is this very clear and identifiable growth in our business that's coming from all these fully contracted projects. So we've got a couple of billion dollars this year, a little over $3 billion next year, and about two-thirds, a little more than two-thirds of that is coming from these big regulated projects and they are going to really drive growth well beyond 2017.

What he is referring to are the expansion projects that run the length of its Transco pipeline: 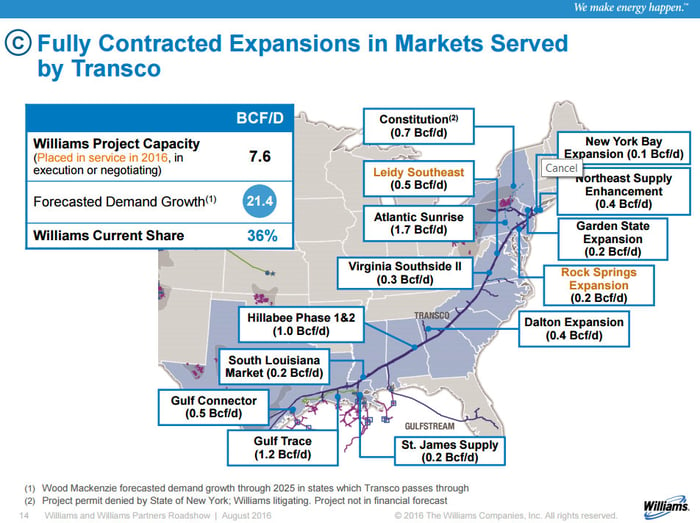 As that map shows, the company is building several new connections and pipelines to bring natural gas supplies to meet growing demand along the east coast. These demand-driven projects are fully contracted and will, therefore, start throwing off cash flow immediately upon entering service. That said, the bulk of Williams' investments in these projects are earmarked for 2017, meaning it has one more big year of spending ahead of it. That is due in part to the Atlantic Sunrise project, which isn't expected to be in service until the end of next year. That project, in particular, makes Williams Companies and Williams Partners a 2018 story, because once Atlantic Sunrise is online, Williams Partners' capex spending will go down, and its cash flow will go up.

A peak into the future

If everything goes according to plan, Williams Companies expects two things to happen in 2018. First, Williams Partners' earnings will increase to the point that it will grow into its debt. As a result, the company estimates that Williams Partners' debt to EBITDA will be 4.5 times by 2018, enabling the company to maintain its investment-grade credit rating.

In addition to that, both Williams Companies and Williams Partners expect to be in the position to return more cash to shareholders. For Williams Partners, it means the resumption of distribution growth after roughly two years of a flat payout. Meanwhile, Williams Companies will begin to rebuild its dividend after recently cutting it 69% to support its MLP. Its payout increase could be substantial because it will likely no longer need to support its MLP by reinvesting much of its cash proceeds into additional units. Meanwhile, after acquiring $1.7 billion of additional units over the next two years, the company stands to generate a boatload of cash flow in 2018, giving it plenty of excess to send back to investors.

Williams Companies got off to a rough start this year after its plan to merge with Energy Transfer Equity hit several road blocks and eventually fell apart. While that deal was initially expected to provide immediate value to investors, its imposition does not mean investors lose out. Instead, Williams believes its future is bright for investors who are patient enough to wait until 2018.