Berkshire Hathaway (NYSE:BRK.A) (NYSE:BRK.B), the massive conglomerate led by Warren Buffett, hasn't exactly delivered outstanding performance over the past year or so. In fact, since the beginning of 2015, the stock has actually lost a little over 1%, significantly underperforming the S&P 500 during that time. However, Berkshire's best days may still be ahead of it. Here are three things that could give Berkshire shares the catalyst they need to rise to new highs. 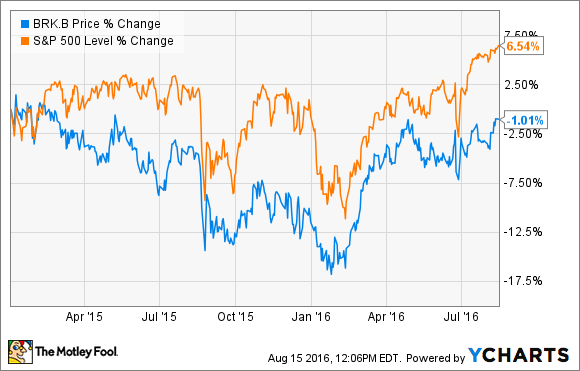 As of this writing, Berkshire's stock portfolio is worth nearly $141 billion, which represents about 39% of the company's total market capitalization. Therefore, if the stock market continues to hit record highs, it could easily catapult Berkshire's stock price higher.

And, while Berkshire Hathaway owns about 45 individual stocks, its portfolio is weighted heavily toward a few big investments. So, while a big move in Kraft Heinz, Berkshire's largest stock holding, could easily send shares higher, a big move in Visa would not have as much of an effect, since it is a much smaller stake.

With that in mind, here are Berkshire's five largest stock holdings. A significant move in any of these companies could have a noticeable impact on Berkshire's share price:

In general, rising interest rates are bad for most stocks. However, there are several reasons to believe rising rates could actually help Berkshire Hathaway.

For starters, the company's stock portfolio has heavy positions in banking stocks. In addition to Wells Fargo and American Express in the list above, Berkshire has substantial stakes in Bank of New York Mellon, Goldman Sachs, M&T Bank, and U.S. Bancorp. Additionally, Berkshire has the option to buy 700 million shares of Bank of America for $5 billion any time before September 2021. Higher interest rates could increase these banks' profit margins, which would likely lead to higher share prices.

And, since most types of stocks suffer in rising-rate environments, it could create a stock-picking opportunity for Berkshire. Buffett has said that stocks would appear expensive if interest rates began to normalize, and he said that when the S&P 500 was significantly cheaper than it is today. Buffett loves putting a lot of money into the market when stocks are falling -- in fact, that's how he came to invest in Goldman Sachs and Bank of America at fire-sale prices. If rising interest rates were to cause a market correction, I'd expect more of the same.

Finally, Berkshire likes to keep a sizable stockpile of cash on hand, both for acquisitions and as reserves for its insurance business. As of the end of the second quarter, the cash stockpile was about $72.7 billion, so if interest rates were to rise by a couple percentage points, it could translate into billions of dollars of interest income for Berkshire.

Berkshire could make an attractive acquisition

Warren Buffett likes to buy stocks, but he has made it clear in the past that if Berkshire can buy 100% of a company for an attractive price, that is the preferred method of expansion. The recent $32.7 billion acquisition of Precision Castparts was Berkshire's largest acquisition to date, and other notable recent buys have been Duracell, NV Energy, and H.J. Heinz (although it's now part of Kraft Heinz).

I mentioned in the previous section that Berkshire Hathaway has a massive stockpile of cash, as well as the ability to borrow money cheaply. In fact, the company just issued bonds maturing in 2018 and 2019 with interest rates of just 1.15% and 1.3% respectively.

In a nutshell, Berkshire is always on the lookout for its next big acquisition, and if it announces one that the market perceives to be a great value, it could easily drive the share price upward.

This isn't a full list of the reasons Berkshire could rise -- there are many different scenarios that could cause a move to the upside. Conversely, there are some scenarios where Berkshire could fall -- a market correction could hit Berkshire's stock portfolio, for instance (although probably not as badly as it would affect the rest of the market). The point is that nobody can predict the future, especially when it comes to the stock market, but these are three scenarios that could definitely happen that could cause shares to rise.