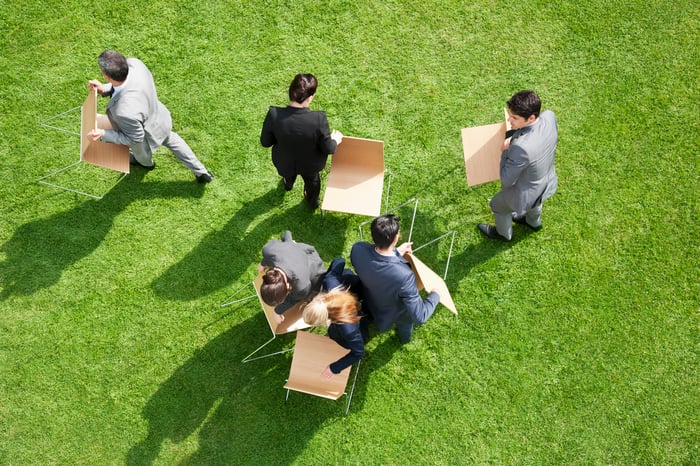 Alphabet (NASDAQ:GOOG) (NASDAQ:GOOGL) lost three key executives in its other bets business division over the past few months. Should this be interpreted as a sign of turmoil and uncertainty? To what degree should investors be worried?

Alphabet (the company formerly known as Google) changed its name and corporate structure last year. Alphabet now includes both Google and the other bets division, which is a collection of businesses and projects in highly innovative areas. It includes self-driving cars, home connectivity, high-speed internet, and futuristic healthcare ventures, among other projects.

The other bets segment is going through major changes at the top. Bill Maris, founder and CEO of GV (formerly named Google Ventures), is leaving the company. Marris will reportedly be replaced by David Krane, a managing partner for the venture capital arm at Google.

This is not an isolated event: Chris Umson, chief technologhy officer at Alphabet's self-driving car project left the company in August. Umson was followed out the door by Jiajun Zhu, the team's principal software engineer and one of its founders, and also by Dave Ferguson, another software lead in the self-driving car unit.

Alphabet purchased smart home products company Nest Labs for $3.2 billion in 2014, and things haven't worked out as expected since then. Nest Labs missed its sales targets in 2015, and several executives departed the company over the last couple of years. Finally, Tony Fadell, Nest Labs' founder, was replaced as CEO by Marwan Fawaz, who used to be an executive at Motorola Mobility, in June.

Since many of these projects are kept secret, it's hard to determine what exactly is going on at Alphabet's other bets segment. That said, the fact that several top executives are leaving the company is hardly a reason for optimism. CEOs don't usually leave a company when the business is thriving and future prospects look promising.

What this means for investors in Alphabet

The company's other bets division is an eclectic collection of projects in different areas. However, they share a key characteristic: Most of these initiatives have limited commercial viability in the short term, and they are consuming capital while operating in the red.

In fact, one of the main reasons Alphabet decided to change its corporate structure in 2015 was to better reflect on its current business model and strategy. Google is a massively profitable business thanks to its leadership position in online advertising. The other bets division is a different story in terms of its financial contribution to Alphabet as a whole.

The following table offers some statistics obtained from Alphabet's financial report for the second quarter of 2016.

Even if it's growing rapidly, the other bets segment accounts for less than 1% of total revenue, and it's currently dragging on overall profitability. These initiatives could offer intriguing potential for growth and innovation over the long term, but they are not generating a lot of value for investors right now. In fact, if Alphabet is going to reduce its spending in other bets, this could even have a positive impact on the company's overall earnings over the midterm.

The fact that several important executives at Alphabet's other bets division are leaving likely indicates that these projects are not performing as expected, or at least that Alphabet considers that these companies have significant room for improvement under a new leadership. This seems to mean that the money that Alphabet has allocated to these ventures is producing disappointing results, which is clearly bad news for investors.

However, Google is far more important to Alphabet investors than other bets, and the online advertising juggernaut is producing impressive performance when it comes to both sales and earnings. Management turnover is a relevant factor to watch going forward, but Alphabet remains a remarkably solid business thanks to Google, no matter what happens at other bets.