Please ensure Javascript is enabled for purposes of website accessibility
Free Article Join Over 1 Million Premium Members And Get More In-Depth Stock Guidance and Research
By Ashraf Eassa - Aug 18, 2016 at 8:47AM

Lots of goodies from this chip giant on an important topic.

At its annual developer forum, microprocessor giant Intel ( INTC 0.15% ) disclosed quite a lot of information about its current and future chip manufacturing technologies, something that was sorely needed after a long stretch of essentially radio silence.

There is a lot of ground to cover here as the presentation that the company gave was packed to the brim with goodies. Let's get to it.

The first such derivative technology that Intel is announcing (or, at the very least, bothering to brand for investors' sake) is 14+. This is a technology that includes enhancements to both the transistor as well as the metal stack to yield a performance improvement of 12%.

This process is what the company's upcoming Kaby Lake family of processors as well as, I assume, the company's second generation of 14-nanometer server processors slated for launch in 2017, will be built on.

Intel says that there will be three waves of its future 10-nanometer technology: 10, 10+, and 10++. These, the company says, will "support multiple new leading-edge products."

This means that even though Intel will be "stuck" on its 10-nanometer technology for three product generations, the company should be able to wring out additional manufacturing-related performance enhancements on top of product-level architectural improvements.

One metric that Intel has talked quite a lot about is the logic area density of its manufacturing technologies relative to competing technologies from Taiwan Semiconductor Manufacturing Corporation ( TSM -1.74% ) and Samsung Electronics (NASDAQOTH: SSNLF).

The idea is that the more tightly a company can pack transistors (what chips are made of), the more features and functionality it can cram into a fixed chip area.

Here's the slide that Intel showed comparing its technologies with those from its competition: 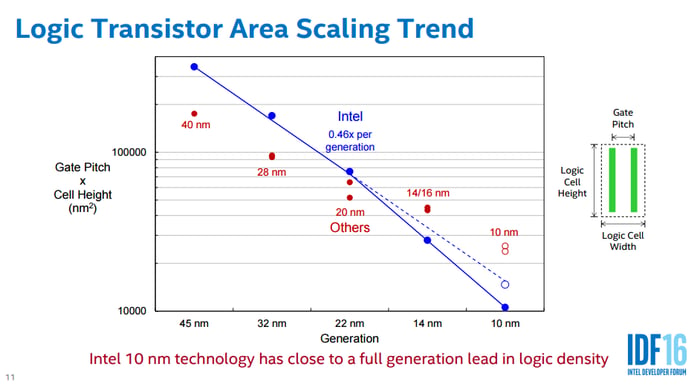 Although I believe that Intel will be able to maintain a solid transistor density lead over Samsung, the competitive picture vis-à-vis TSMC is a little less clear. Though it is true that Intel's 10-nanometer should be quite a bit denser than TSMC's 10-nanometer, TSMC has indicated that it will transition to its 7-nanometer technology in the first half of 2018.

I suspect, though, that any sustained advantage that Intel will be able to build over TSMC won't necessarily be in terms of transistor area but, instead, in transistor performance as the company iterates through its 10, 10+, and 10++ technologies.

What does this mean for the business?

At the end of the day, it's Intel's job to build compelling products for the various markets that it serves. Yearly performance improvements in manufacturing technology should allow the company to release better and faster products each year, allowing it to gain share in new areas (such as the Internet of Things and networking) while defending its position in areas where it's already strong (personal computers, servers).