Graphics specialist NVIDIA (NASDAQ:NVDA) began rolling out graphics processors based on its Pascal architecture back in May of this year. The initial round of products targeted gamers that play games on desktop personal computers.

However, with each graphics processor generation, the company has also rolled out versions of its graphics processors targeted at gaming laptops. According to the company, the gaming notebook market is "the fastest growing gaming platform," having enjoyed 30% year-over-year growth over the last year.

Historically, these notebook-oriented versions of those graphics processors have been significantly weaker than their desktop counterparts. The gap had been shrinking over the last several generations, though, as NVIDIA had been quite proud to point out at its product launches. With Pascal, it seems that the company has finally closed that gap.

The GTX 1060 and GTX 1080 for notebooks are virtually identical to their desktop counterparts (the main difference being that the 1060 for notebooks has a slightly lower boost speed of 1.67GHz compared to the 1.708GHz boost clock of the desktop model).

The GTX 1070 for notebooks is a bit different. It's intended to offer the same performance as the desktop GTX 1070 (which is, itself, a partially disabled GTX 1080 paired with slower GDDR5 memory rather than the faster GDDR5X), but it gets there a bit differently.

Desktop-bound graphics processors are usually sold in two ways. First, as add-in-boards from NVIDIA as well as a range of partners directly to consumers who then take those boards and plug them into systems themselves. Second, as add-in-boards that are pre-installed into personal computers.

In its launch presentation for the mobile GTX 10-series graphics processors, NVIDIA included a slide listing a broad range of partners, as you can see below: 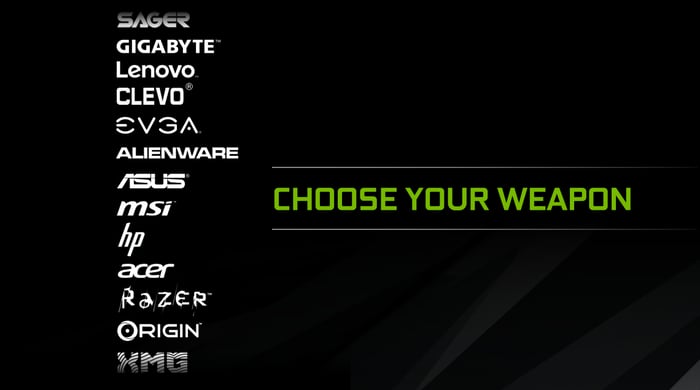 The Pascal roll-out is nearly complete

At this point, the roll-out of NVIDIA's gaming-oriented Pascal graphics processors -- for both notebooks and desktops -- is nearly complete. All that's really left is for the company to launch GP107, which should be slower and lower cost than the GP106-based GTX 1060 (for both notebooks and desktops). There's a GP108 coming, too, but this one probably won't be all that interesting to most gamers.

"We have taped out, we have verified, we have ramped every Pascal [graphics processing unit]," NVIDIA CEO Jen-Hsun Huang said on the company's most recent earnings call. "However, we have not introduced every one."

It probably won't be too long before the rest of the Pascal family of graphics processors is out in the marketplace, but for the bulk of the gaming market, the roll-out seems pretty much complete.