Loud and public agitating for change within megacorporations is slowly giving way to a new activist trend.

What's the best way to increase the odds of success in a stock investment? For most of us, research, conviction, and patience factor significantly in a profitable equity holding.

But if your pockets are deep enough, you might steadily amass a position worth several percentage points of the ownership of a large multinational. Then, at the appropriate moment, you can mount a pedestal, and argue vociferously and very publicly for change -- an approach exemplified by master activists like Bill Ackman and Carl Icahn.

While this style of aggressive interference may be de rigueur among a certain type of institutional investor, evidence suggests that some activist firms are switching up their tactics. According to a new report from Activistmonitor, a shareholder activist platform owned by mergers-and-acquisitions resource firm Mergermarket, change advocates are departing from standard practice by keeping a much lower profile and targeting smaller companies.

A new breed of agitators

Who are these nontraditionalists? Activistmonitor defines them as activists who accumulate less than the 5% stake threshold which requires filing a 13D disclosure schedule with the SEC. The report indicates that investors who seek to force change are finding that they can influence corporate management without having to pony up for a traditional 5%-plus share.

Of course, hedge funds and other institutional money managers with assets exceeding $100 million (at fair market value) are still required to disclose their holdings each quarter by filing the better-known SEC Form 13F.

However, disclosing a 1% or 2% position in a corporation through Form 13F doesn't itself imply that you're running an activist campaign, while the filing of Schedule 13D requires you to disclose not only your total position, but your intent in the acquisition.

There are cogent reasons for taking what Activistmonitor dubs a below-the-radar approach. Not every campaign is a bare-knuckle fracas with the intent to completely upend corporate strategy, as investment group Starboard Value LP did when it took control of Darden Restaurants, Inc. (DRI -0.34%) in late 2014.

Instead, in many cases, diplomacy, with the subtle pressure of ongoing share accumulation, may serve an investor's interests with more effect.

After all, the confrontational approach, which consists of presenting a lengthy white paper panning the strategy employed by a corporation's executive team and board, ends up subjecting both parties, and the alternate investment thesis itself, to immediate scrutiny. Analysts, the press, and other investors then weigh in on either side of the proposition.

Thus, those who wish to avoid the near-instant escalation and public feuding that nearly always follows, and are able to gain the ear of management with as little as a 1% stake, naturally have good reason to opt to go under the radar.

The second identified trend appears to be a growing preference for more diminutive corporate targets. In the first half of 2015, Activistmonitor measured 16 "Super Campaigns" involving companies with market capitalizations of more than $10 billion. In the first two quarters of 2016, the Super Campaign tally fell to just six. And with a median target market cap of $1.6 billion, it seems that activists are currently satisfying their appetites within the mid-cap, and even small-cap categories.

Dropping down to mid-cap level has a distinct advantage: The smaller the market capitalization of the target, the less capital it takes to build an under-the-radar position. Moreover, launch a Super Campaign and you're playing with super stakes. Visibly agitating at the doorstep of a household name can punish as well as reward -- a failed "big bet" campaign hits both a fund's resources and its reputation.

Where large investors are aiming their sights, and what they're after

As has been the trend in recent years, the technology, media, and telecommunications, or TMT, sector, has enjoyed the most attention in 2016, drawing 36% of all campaigns. This is followed by pharma/bio/medical at 16%, and consumer and leisure at 13%, with the rest spread fairly evenly between industrials, energy, real estate, and financial institutions.

As for what exactly activist teams seek to influence, over the last five years, board changes and board representation have increased in importance, with governance issues and capital allocation remaining high priorities: 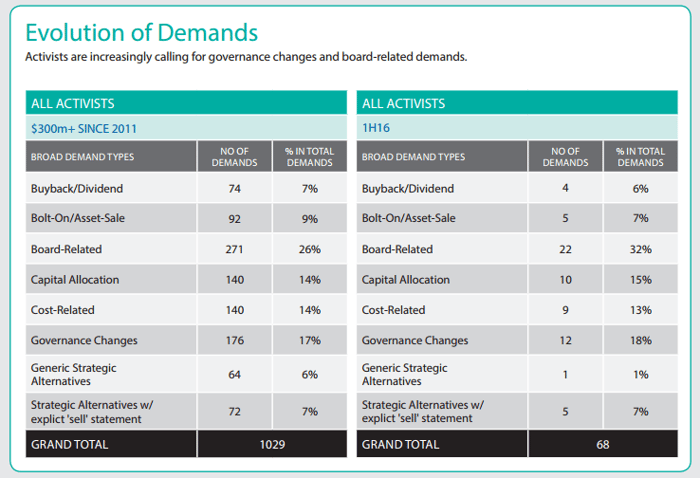 Effects on your portfolio

There are a few implications in the Activistmonitor report for the average retail investor to note. The trend toward discreet campaigns at mid-cap companies diminishes the ability of investors to ride the coattails of favorite activists -- or to bail out of companies when certain activists make their ownership known. Either way, when a fund seeks quiet influence as opposed to a groundswell of support from other investors, it's simply more difficult to know when a 1% or 2% stake revealed in a Form 13F filing is active or passive.

The emergence of lower-key, non-Super Campaign efforts also means that a stock you own may be outperforming due to the effects of activism without your knowledge. And of course, the reverse can be true as well -- activists, no matter how powerful or well-resourced, don't always get things right.

The Fool Looks Ahead

The Fool Looks Ahead