Eaton Corp. (NYSE:ETN) is a diversified industrial company focused on power management. Although it's still quite profitable, organic sales shrank last year and are expected to do the same again this year, too. Here are the three biggest challenges facing Eaton Corp. today.

Eaton breaks its business down into five parts: electrical products makes up around 35% of sales, electrical systems and services 28%, hydraulics 12%, aerospace 9%, and vehicle the rest. Furthermore, the U.S. market accounts for half the business, with developed and emerging markets basically splitting the rest. And the company has roughly equal exposure to businesses that prosper during the early, mid-, and late stages of the economic cycle. That's pretty notable diversification. 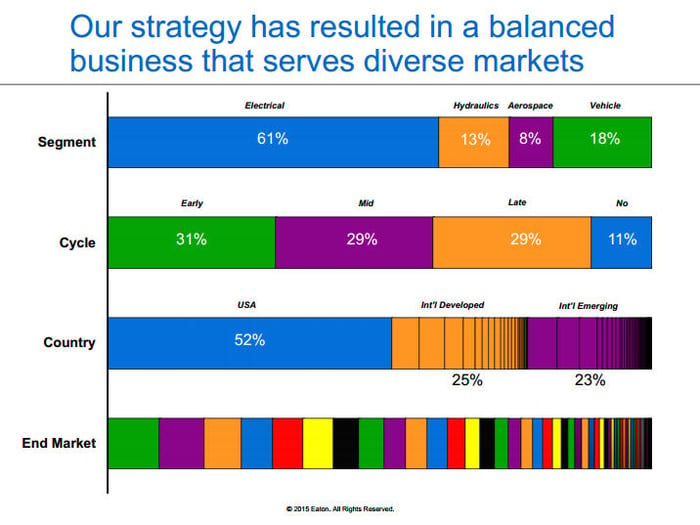 But Eaton is still an industrial company facing a slowing global economy. That's why organic sales fell around 2% last year and are expected to decline between 2% and 4% this year. Eaton, however, isn't alone. For example, Emerson Electric (NYSE:EMR) is expecting underlying sales to fall between 5% and 6% in fiscal 2016. Honeywell International (NASDAQ:HON), meanwhile, lowered its organic-growth forecast in the second quarter to just 1% for all of 2016. In other words, it's rough all around.

So slow industrial growth is the first big challenge facing Eaton and its peers. There's only just so much the company can do about it, too, other than cut costs and refocus its business on stronger segments of the market.

Doing what it can

With a diversified portfolio of products and markets, Eaton's heavy lifting today is trying to get leaner and meaner. As a conglomerate, Eaton is always tweaking things, but this year it's got a $145 million restructuring plan in place. It's already spent around $100 million of that. The goal is to save $190 million a year on an ongoing basis, when all is said and done. 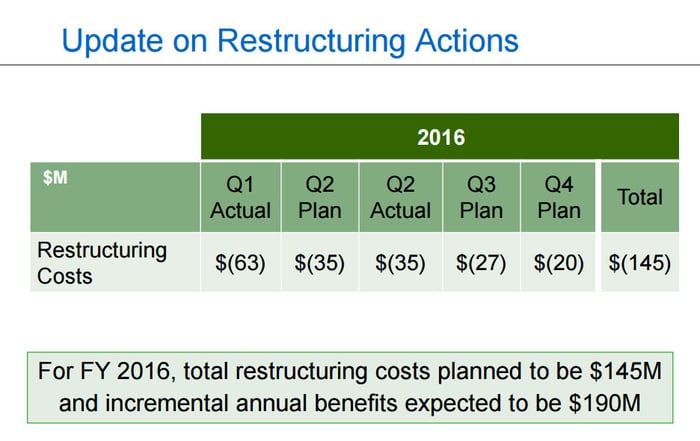 But things don't always work out as planned. So the big challenge here is execution. The company needs to make sure that the changes it's making actually take shape as expected. So far things appear to be going pretty well, but the costs of the changes are notable. For example, restructuring costs pulled 60 basis points off second-quarter operating margin. That's a very real expense, and if the expected results don't materialize, it will be a big negative for the company going forward.

The first two challenges facing Eaton are big-picture things. Although they are tough issues, Eaton has been around a long time and it's lived through difficult times before. A more concerning problem is the downturn in the hydraulics segment. Total sales in this group fell 17% year over year in 2015, and they've fallen another 13% so far this year. Those two numbers make the roughly 8% year-over-year decline in the second quarter look almost like an improvement, but it really isn't -- the news is still not good.

The problem in hydraulics is that a key end market is heavy equipment -- the type of machines that serve the construction, farming, mining, and oil and gas industries. China's economic slowdown and the deep commodity downturn have taken a big toll on Eaton's hydraulics business. In fact, a good deal of the company's restructuring spending is taking place in this business. Until there's better news, however, this division will continue to be a drag on overall results and an area worth paying close attention to.

To be fair, there's been notable trouble in the auto division, too, this year, with overall sales down 16% in the second quarter. This business, however, hasn't seen the same depth of trouble as hydraulics, as auto's issues are largely related to truck sales, which can be lumpy. (New truck emissions standards actually suggest a bright future for this division over the long haul.) Put more simply, hydraulics' problems are more widespread.

Although Eaton's three biggest challenges -- namely generally slowing industrial demand, execution risk as it adjusts its business to current market conditions, and the particularly deep downturn facing its hydraulics business -- are notable,  the company is still making plenty of money. For example, despite the headwinds, Eaton expects to earn between $4.20 and $4.40 per share in 2016. So these are not life-or-death issues by any stretch of the imagination. But they have pushed the company's shares down roughly 15% from their 2014 highs (they were off as much as 30% at the start of this year). So each of these challenges is worth watching closely, just in case the trends don't start to improve.