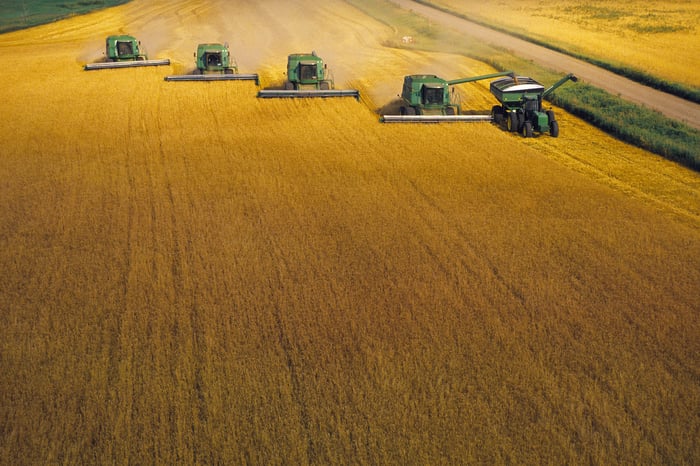 So what: Deere released much stronger-than-expected fiscal third-quarter results before the opening bell this morning. The company reported net income of $488.8 million, or $1.55 per share, which was a whopping $0.61 per share more than the consensus forecast. Furthermore, earnings were $0.02 per share higher than the year-ago quarter, though that was partially due to a much lower share count as a result of stock buybacks because net income in the year-ago quarter was higher at $511.6 million. Meanwhile, equipment sales were down 14.3% year over year to $5.86 billion, missing the consensus estimate by $230 million.

On the one hand, Deere's results "reflected the continuing impact of the global farm recession as well as difficult conditions in the construction and equipment markets," according to CEO Samuel Allen. That said, the company overcame these headwinds by keeping all of its businesses in the green, thanks in part to disciplined cost management. The cost of sales, for example, was down 16% due in part to lower production costs while selling, administrative, and general expenses slumped 6%.

Because of the unexpectedly strong profit, Deere boosted its full-year net income outlook from $1.2 billion to $1.35 billion. It still anticipates equipment sales to fall by about 10% on the year because of the continued weakness in the farm equipment market.

Now what: Deere's ability to keep a lid on its costs muted the impact of the very challenging market conditions. While those headwinds are not expected to abate anytime soon, the company believes it can continue to drive down costs to more than match the market. As a result, Allen said that he "firmly believe[s] Deere is on the right track to deliver significant value to its customers and investors in the years ahead."