Trying to time the market is a recipe for disaster. But there's nothing wrong with waiting for shares of a great company to be knocked down before pouncing. Some of the best investing opportunities occur because some short-term problem temporarily sours a stock in the minds of investors. Keeping a watch list of stocks that aren't quite cheap enough to buy is a critical tool for capturing those opportunities. We asked three of our top Foolish contributors to discuss a stock that they're watching. Here's what they had to say.

Not quite cheap enough

Tim Green: When shares of retail behemoth Wal-Mart (NYSE:WMT) sank last year after its plan to raise wages and invest in initiatives like employee training and e-commerce caused profits to drop, I considered pulling the trigger and buying the stock. While the rise of Amazon.com is a major threat to the company's business model, I think that the market was underestimating Wal-Mart's ability to adapt.

Fast-forward to today and investor sentiment has completely shifted. Since hitting bottom in late 2015, the stock has soared nearly 30%. Wal-Mart's results have been better than expected, with comparable sales in its U.S. stores increasing for eight straight quarters. At a time when many retailers are struggling to get shoppers in the door, Wal-Mart's store traffic is rising, thanks in part to the company's initiatives aimed at improving the customer experience. 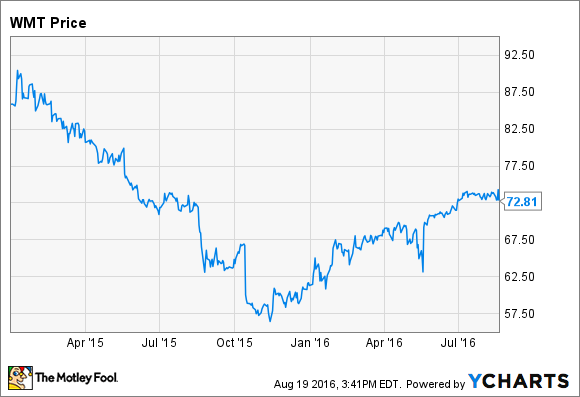 Wal-Mart has been investing in a variety of e-commerce initiatives, like its online grocery ordering and pickup service. But the recent $3.3 billion acquisition of e-commerce start-up Jet is the company's boldest bet so far. Jet aims to undercut Amazon on price by offering discounts based on the quantity of items purchased. The company is almost certainly burning cash at a blistering pace, but the acquisition gives Wal-Mart an e-commerce brand that could grow very quickly in the coming years, as well as the services of Jet's founder.

Wal-Mart expects to produce between $4.15 and $4.35 in adjusted EPS this year, putting the stock price at nearly 17 times the high of that range. That's not particularly cheap, but earnings will be depressed this year due to the company's investments. Still, I try to ensure an adequate margin of safety for all of my investments, and Wal-Mart has gotten just a bit too expensive. If the stock drops on short-term worries in the coming months, I'll be waiting.

Matt DiLallo: After running up 50% since the start of the year, energy infrastructure giant Kinder Morgan (NYSE:KMI) is no longer the screaming bargain it once was. That said, there is certainly the case to be made that it is still on sale, given that shares are down more than 30% over the past year. However, I would rather wait until the next sale before bolstering my position any further.

The reason Kinder Morgan's stock ran up so much this year is due to the significant progress it made on fixing its balance sheet problems. The company entered into several strategic transactions to sell or joint venture select assets. Those deals pushed its leverage ratio down to 5.3 times, which is below its year-end target for 5.5 times debt-to-EBITDA. That said, the company will not begin to return more cash to shareholders until its leverage is below 5.0 times debt to EBITDA. Given its current projections, that might not happen until 2018.

Because most investors are not that patient, I think they might grow restless, especially if Kinder Morgan does not start hinting that a dividend increase will happen early next year. That is why I am hoping that there just might be another golden opportunity to buy Kinder Morgan's stock in the near future. I could be wrong, and I own enough Kinder Morgan stock to be happy if it keeps going higher, but I would jump at the chance to buy more if the stock suddenly dropped by double digits due to investor impatience.

A risk management expert with a bright future ahead

Brian Feroldi: I'm already a happy shareholder of Verisk Analytics (NASDAQ:VRSK), but I'm eagerly waiting for shares to go on sale so I can continue to build upon my small position.
Verisk is a provider of tools and data analytics that help other businesses to measure and manage their risk profile. The company's primary customers are property and casualty insurers, but it is constantly adding new customers from other markets outside of the insurance sector that afford it plenty of long-term growth opportunities.
Though Verisk might sound like a boring business to own, it exhibits many traits that make for an excellent long-term investment. For one, more than 80% of the company's revenue is subscription-based, and since Verisk boasts stellar retention rates, its top line is highly predictable. In addition, as a data provider, it costs the company very little to service additional customers, which allows Verisk to grow its profits at a faster rate than its revenue. 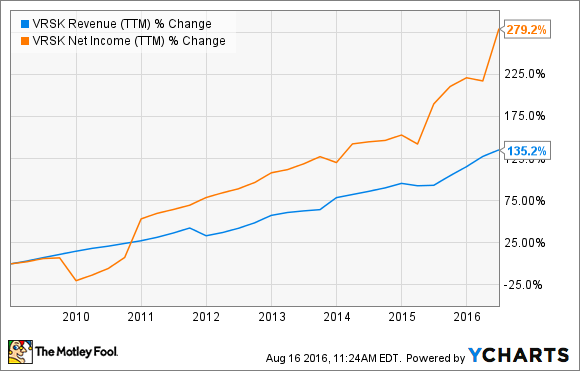 Lastly, the company's data is proprietary and dates back to 1971, which gives it a huge leg up over competitors. And since its services are mission critical to its customers, Verisk can push along regular price increases without much fuss.
All in all, Verisk is an extremely high-quality company with an enduring moat that I think should be able to grow at an above-average rate for years to come. I'd love to add to my position today, but the company's shares are currently trading for about 27 times full-year earnings estimates, hinting that they are a little bit pricey right now. However, if this stock were to suddenly go on sale, you can bet that I'd happily step in and buy shares at a discount.
This article represents the opinion of the writer, who may disagree with the “official” recommendation position of a Motley Fool premium advisory service. We’re motley! Questioning an investing thesis -- even one of our own -- helps us all think critically about investing and make decisions that help us become smarter, happier, and richer.