Kimberly-Clark's Kleenex is the most popular brand of facial tissues. Source: Getty Images.

Sometimes, boring is beautiful. For a good example of this maxim, look no further than Kimberly-Clark Corporation's (NYSE:KMB) recent five-year history. KMB has increased its per-share price nearly 102%, or approximately 15% per year, while the greater S&P 500 has returned 12.8% per year. The chart below compares the two investments: 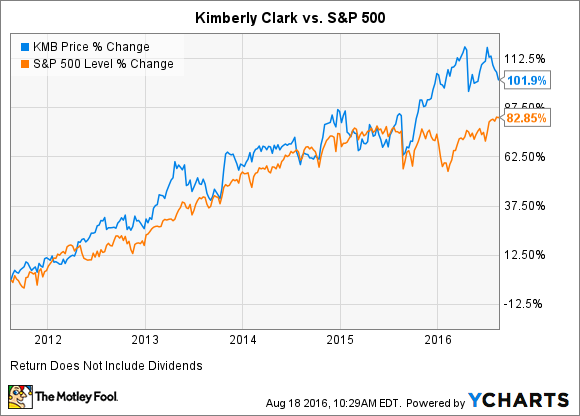 However, this chart alone does a disservice to KMB's return during this period. Below is a chart of the company's annualized dividend increases over the prior five-year period. Overall, the company has increased its dividend 6.7% per year since 2012 in addition to the company's strong capital-gains performance.

While Kimberly-Clark has outperformed the greater S&P 500 over the last five years and has increased its dividend at five times the rate of general inflation, there's one thing, historically, it has not done for investors during this time frame. If price and history are of any indication, Kimberly-Clark is due for another stock split.

There's nothing specific about the dates, but a non-split adjusted chart of Kimberly-Clark's stock prices since 1978 shows what is really important -- the price. Notice the large price fall around those dates? More importantly, notice the price level before each split:

It was well known that Kimberly-Clark used to announce stock splits when the company traded around $100 per share. After decades of remaining under the $100 threshold, Kimberly-Clark briefly broke that barrier in 2013 and has continued to remain above the level since 2014. Still, no stock split has been announced. So while the company has broken from past tradition of splitting its stock when the price broke the $100 barrier, the question is, should investors care?

There's a lot of confusion about stock splits. Many investors will tell you that stock splits are not important; but if they're not, why do companies do them? Additionally, if you look over most of the highest-returning stocks over the last 20 years, it's more than likely these companies have performed some type of stock split, and maybe even more than one. As an extreme example, one share of The Coca-Cola Company purchased in 1919 is now the equivalent of 9,200 shares due to the company's 11 stock splits.

However, this line of thought is mostly right when it comes to current valuations. While the earnings per share goes down, so does the price per share. Therefore, the price-to-earnings ratio (price per share/earnings per share) should, theoretically, remain the same. Most valuation metrics naturally adjust accordingly, making a stock split a non-event for fundamental investors.

In the short run, there's generally a boost in the stock price once a company performs a stock split. The lower stock price generally allows more investors to take a stake in the company. This improves liquidity, which results in higher valuation multiples (read: higher stock prices).

However, this is generally a short-term, one-time boost that can quickly evaporate if the company is unable to perform. Long story short, Kimberly-Clark is overdue for a stock split, but investors should pay more attention to the company's operational performance.

Is Kimberly-Clark Corp. Due for a Stock Split? @themotleyfool #stocks $KMB Next Article
Current