What: Crude oil rallied again this week, jumping about 8% for its biggest weekly gain in nearly four months. Fueling crude's gains were the market's enthusiasm that OPEC might step in to stabilize prices when it meets next month as well as a significant drop in inventories.

That said, crude was not the only thing driving oil stocks this week, with several riding higher as a result of analyst upgrades and other bullish news. The biggest movers, according to data from S&P Global Market Intelligence, included Chesapeake Energy (OTC:CHKA.Q), Unit (NYSE:UNT), Denbury Resources (NYSE:DNR), Marathon Oil (NYSE:MRO), and Bill Barrett (NYSE:HPR): 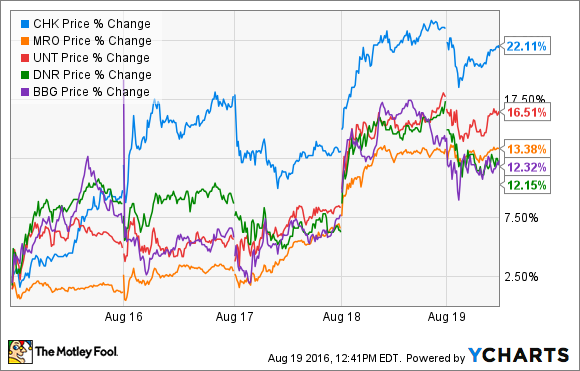 So what: Chesapeake Energy surged after announcing that it arranged a $1 billion five-year term loan, which was later increased to $1.5 billion, to buy back its senior notes. That credit will enable the company to repurchase near-term debt maturities to eliminate one of its most pressing financial concerns. Analysts loved the move, with CapitalOne upgrading the stock from underweight to equal weight while boosting its price target from $4 to $6. Meanwhile, Barclays also increased its price target from $1 to $3.

Analysts were the primary catalysts driving Marathon Oil's stock up this week after Bank of America upgraded it from neutral to buy. They did so under the belief that Marathon Oil will resume production growth next year, thanks in part to its recent acquisition of additional acreage in the lucrative STACK play.

Bill Barrett surged this week after announcing the resumption of its drilling program in the DJ Basin. The company plans to drill 12 wells this year, though they will not come on line until 2017. That said, the company can fund these wells without increasing its capex budget due to drilling efficiencies and cost reductions. That will enable Bill Barrett to remain cash flow positive while setting it up for a strong start in 2017.

Meanwhile, surging oil prices were all that was needed to drive Denbury Resources and Unit higher this week. That is because both companies need higher oil prices to get back on solid ground. For example, all three of Unit's operating segments are suffering due to the commodity price slump. During the second quarter, Unit's oil and gas production declined 14% from the year-ago quarter, utilization in its contract drilling segment decreased 56% year over year, while gas processed and liquids sold were down by double digits in its midstream segment. Denbury Resources, on the other hand, has balance sheet worries to overcome with an analyst at Barclays recently saying that its balance sheet remains stretched despite the fact that company's debt is down 16% since the start of the year. The hope is that higher oil prices will cure what ails both companies.

Now what: Higher oil prices have investors and analysts getting more bullish on oil stocks. Companies like Chesapeake Energy are finally able to borrow money again, which is putting its debt concerns on the back burner. Meanwhile, other producers are finally in the position to restart dormant drilling programs. That said, the industry is not out of the woods just yet, with several struggling companies needing oil to go even higher before they are back on stable ground.