Please ensure Javascript is enabled for purposes of website accessibility
Log In Help Join The Motley Fool
Free Article Join Over 1 Million Premium Members And Get More In-Depth Stock Guidance and Research
By Daniel B. Kline - Aug 20, 2016 at 11:42AM

Dropping traditional pay-television absolutely saves you money, but it may be more trouble than it's worth.

Sometime during the 1980s my parents got cable for our home in the Boston suburb of Swampscott, Massachusetts.

The selections were limited (HBO seemed to have about four movies) and the cable box also served as the remote with each channel getting its own button. What we got at the time was laughable compared to the 500-channel universe we have now, but it was an explosion of choices over the three broadcast networks and two major Ultra High Frequency (UHF) stations we received over the air at the time.

I have had cable since those days, most recently being served by Frontier (FTR) at my home and Comcast (CMCSA -1.45%) at my office. Bruce Springsteen may have sang, "there's 57 channels and nothin' on," but there was a comfort in flipping through that nothing which kept me tied to traditional cable, even though reason said it was no longer worth the cost.

A recent move however -- from Connecticut to West Palm Beach, Florida -- seemed like a perfect opportunity to cut the cable cord. It would save money and in theory would not involve a major sacrifice of content.

That proved to only be part of the story.

A man with a cord-cutting plan

It's important to note that cord-cutting for a 42-year-old man hooked on cable is a different experience than it would be for a younger person who grew up with YouTube and streaming services. In some ways it's a case of not being able to miss something you never had.

In my case the plan was relatively simple: I wanted to save money by cutting the cord without giving up much in the way of content. To do that I intended to give up Frontier and Comcast (which do not serve my new home) and replace cable with a multi-pronged attack consisting of:

It was a solid plan, but as they say in military jargon, most plans don't survive the first contact with the enemy. 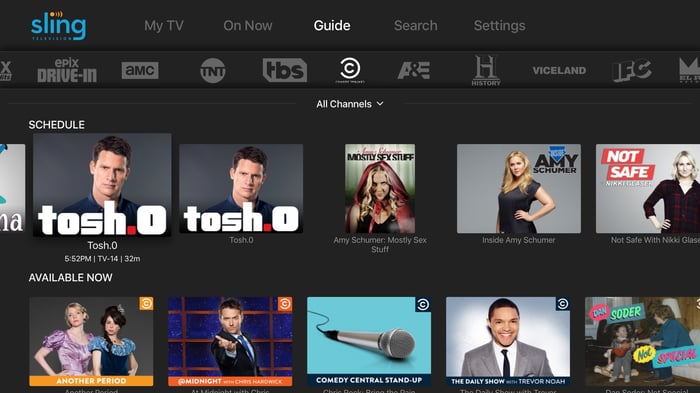 The Hulu and Netflix part of the plan worked perfectly, but I paid for both of those services before deciding to cut the cord (Netflix because we use it, Hulu because we intended to watch The Mindy Project). Both of those services are easy-to-use with Netflix being very strong on originals and Hulu having an excellent library of shows from its partner broadcast networks.

The HDTV antenna, however, was where the plan began to show cracks. Our device registered a fair amount of over-the-air channels including a few network affiliates. Unfortunately, reception was spotty at best, requiring multiple adjustments of the rabbit ear-like antennas. It was an OK solution in a pinch, but not a pleasant way to watch television -- a workaround that felt like a Band-Aid, not a viable way to regularly watch TV.

After that it came down to the choice of Sony's Playstation Vue versus DISH's Sling. We gave Vue the first shot because it offered more channels, and it included a robust DVR (while Sling only offers a small amount of on-demand programming).

In theory, Vue should be able to replace a traditional cable subscription (and in some markets it even has local channels). The problem is that the service has a terrible interface. It's hard to use, difficult to find what you want, and it's simply not enough like flipping around on traditional cable to be pleasant.

Sling proved to be more user-friendly and even has a mode that lets you easily scan through what's on now. Unfortunately, the lack of a DVR and inability to pause or rewind most live shows made using it ultimately unsatisfying. Sling is cheap, but in most cases it requires you to sit through the commercials.

That's how TV worked just a few years ago, but in 2016, it's a less-than-ideal experience.

Going back to cable

It's easy to see how using the method listed above might work for someone not used to easily being able to watch and record pretty much every channel on the dial. For my family, while we were willing to give up some live sporting events, the big awards shows, and be forced to wait to watch some programs, we were not willing to give up the feel of cable.

Sling has a very good product, which needs to address the DVR and interface issues, while Sony offers something a lot like cable, but with an interface that needs work. Netflix, and to a lesser-extent Hulu, are worth the money even for non-cord-cutters, while HDTV antennas are a viable solution for some, but not for others.

Ultimately, cord-cutting has gotten to the point where it's a good value, but not to where it's not a sacrifice to drop traditional pay television. In our case, it would have been OK if we needed to save the money, but since we had the financial means to un-cut the cord, we elected to do so.