Investors love cheap stocks. It's natural to think that the best stocks to invest in are the bargains with as-yet unrecognized potential. However, when a company's shares break away from the broader market to surge higher, there's usually a good reason for it. Wall Street is often responding to a clear improvement in the company's prospects.

With that in mind, below I'll take a look at a few hot stocks that are beating the S&P 500 by at least 10 percentage points so far in 2016, yet could still make solid long-term investments, even at today's prices.

Stocks on the rise

Facebook's (NASDAQ:FB) stratospheric rise since its IPO makes more sense in context with what CEO Mark Zuckerberg and his team have accomplished lately. In just the last six months, revenue is up 60%, operating income has doubled, and net profit has nearly tripled to $3.6 billion.

The social networking giant is winning where it matters most: user engagement. The monthly active user base rose 15% last quarter, compared to Twitter's 3% uptick, even as monetization soared.

Facebook's average revenue per user (ARPU) spiked 40% higher in Q2, demonstrating that executives are finding plenty of ways to deliver strong returns to advertising clients without harming the user experience.

Numbers like those suggest Facebook is just scratching the surface with enhancements like video streaming, which Zuckerberg said will be "at the heart" of all of the company's services in the future. That transition should continue boosting both user engagement and ARPU over time.

Like most of its peers, Yum! Brands (NYSE:YUM), which owns the KFC, Pizza Hut, and Taco Bell chains, is seeing a growth slowdown right now. Comparable-store sales were flat in the second quarter, compared to a 2% rise in Q1. McDonald's (NYSE:MCD) comps were cut in half over that same period, falling from 6% to 3%, and Chipotle's (NYSE:CMG) pace -- hurt by last year's food safety scare -- remained sharply negative.

Yum!'s profits are holding up far better than rivals', though. Restaurant-level operating margins are up by more than 2 percentage points to 19% of sales. The increased earnings power has translated into 22% higher net income so far this year, compared to a 10% boost for McDonald's and a large decline for Chipotle.

Even with shopper traffic weakening, Yum!'s management in July raised their full-year profit outlook. Investors can also look forward to the chain's spinoff of its China business that's scheduled for the end of October. The break should raise plenty of cash, much of which the company plans to return to shareholders over the coming months.

It's hard to blame investors for bidding up shares of medical and consumer product titan Johnson & Johnson (NYSE:JNJ) this year. Sales growth is outpacing comparable companies, with Q2 results up 4%, while Procter & Gamble (NYSE:PG) could only manage a 2% uptick. Each of J&J's core divisions contributed to the latest gains. Consumer sales and medical device sales were up 4% last quarter, while pharmaceutical revenue spiked higher by 13%. "We continue to see good momentum," CEO Alex Gorsky told shareholders in the most recent quarterly report.

The growth is part of an ultra-long-term trend that's lifted by increased spending in the $6 trillion healthcare market. J&J's strong product pipeline, which is backed by an incredible $9 billion annual budget for research and development, suggests there's no reason to expect that momentum to stall. That commitment to constant innovation helps explain why the company's profitability beats peer so soundly: Gross margin is 27% of sales, compared to 3M's 23% and P&G's 21%. 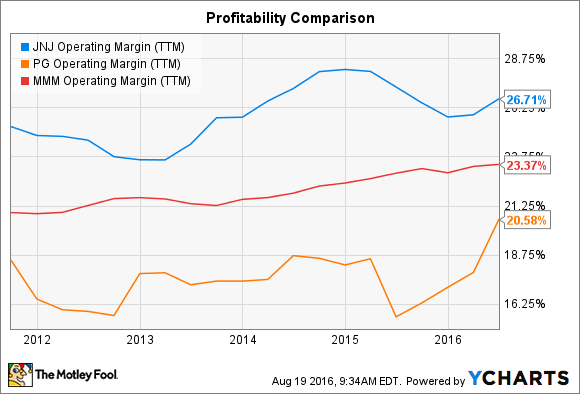 Each of these stocks has grown more expensive this year -- both on an absolute basis and in terms of projected future earnings -- raising the risk that shares will drop if the companies fall short of investors' expectations. However, the spike is also a signal that the companies are succeeding in their strategies and could simply carry that positive momentum forward.