West Texas Intermediate, or WTI, is the most common oil-price benchmark for domestically produced crude. It is also the underlying commodity of oil futures contracts traded on the NYMEX exchange. Because of this, WTI is important to U.S. producers, which can pose a problem when it trades at a discount to other oil barrel prices such as the common global benchmark price Brent. In the past, the spread between the two has been quite wide, resulting in shale producers capturing less per barrel than their global counterparts: 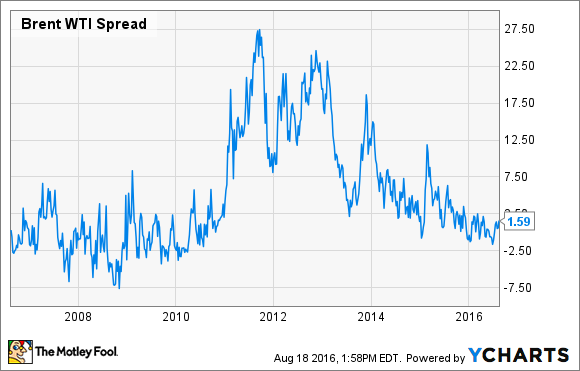 WTI is a light sweet oil. "Light oil" means that it is a low-density liquid that flows freely at room temperature. It also has a low viscosity, low specific gravity, and high API gravity; WTI has an API gravity of around 39.6 and a specific gravity near 0.827, which makes it a lighter oil than Brent. Light oil typically trades at a higher price than heavy oil varieties because it produces larger quantities of higher-valued refined products per barrel. Meanwhile, "sweet" means it has a low sulfur content of less than 0.5%; WTI's sulfur content is 0.24%, which is also less than Brent's. Because sulfur is an impurity, refiners must remove it before refining the oil, which adds to the processing cost and therefore weighs on the price of sour oil.

The unique properties of WTI suggest that it should be a premium-priced oil. However, that is not the case.

Before the shale boom, most refiners in the U.S. were configuring their refineries to process heavy crude oil from Canada's oil sands region because they expected increased imports from our neighbor to the north. Furthermore, most of America's oil infrastructure was designed to handle foreign oil imports, not the flood of new domestic oil that came online during the shale boom. So domestically produced oil, which gets priced at WTI, started piling up in storage facilities, especially in the storage hub of Cushing, Oklahoma. This drove down the price of WTI, causing the spread between WTI and Brent to widen, as shown on the oil price chart above from 2011 to 2015.

One of the most pressing problems was that pipelines flowed from the Gulf Coast to the Midwest, which caused crude from North Dakota's Bakken shale, in particular, to pile up in Oklahoma. Because of that, leading Bakken shale producer Continental Resources (NYSE:CLR), for example, only realized $89.24 per barrel during the fourth quarter of 2011. Contrast this with leading global producer Chevron (NYSE:CVX), which realized $101 per barrel in the same quarter. That $11.76-per-barrel price differential is substantial, especially for a smaller driller like Continental Resources.

With so much oil piling up in Cushing, pipeline companies Enterprise Products Partners (NYSE:EPD) and Enbridge (NYSE:ENB) embarked on a historic project to reverse the flow of a key oil pipeline from Cushing to the Gulf Coast. The initial phase of the Seaway Pipeline reversal was completed in early 2012, which helped alleviate some of the glut of oil stuck in Cushing. It also narrowed the Brent-to-WTI spread a bit. As a result, Continental Resources was able to realize $84.99 for its oil in the fourth quarter of 2012, compared to $91 per barrel for Chevron.

While Enterprise Products Partners and Enbridge subsequently brought on additional southbound capacity at Seaway and built other pipelines to move light oil, these debottlenecking activities did not eliminate Brent's premium to WTI. That is because U.S. refining capacity still was not enough to process all light sweet crude extracted from shale. While refiners invested to increase their processing capacity and access to domestic crude, U.S. producers knew that WTI would continue to sell at a deep discount if it remained landlocked due to the longstanding ban on domestic crude oil exports. That is why Continental Resources, and fellow U.S. producers Pioneer Natural Resources (NYSE:PXD) and ConocoPhillips (NYSE:COP) led the charge to get the U.S. export ban lifted late last year. As a result, Brent now trades at a paltry premium to WTI, enabling U.S. producers to capture nearly as much per barrel as their global peers.

While the WTI-to-Brent spread is minimal at the moment, it is possible that it could widen in the future. That is something investors need to be mindful of when investing in shale producers like Continental Resources and Pioneer Natural Resources. If the Brent premium were to widen for some reason, these producers would not capture as much as global peers like ConocoPhillips and Chevron, putting them at a competitive disadvantage.