Here's what the headlines didn't tell you about the industrial equipment giant's second-quarter numbers.

Caterpillar Inc. (CAT 2.85%) stock has climbed almost 7% since the industrials heavyweight reported its second-quarter numbers at the end of July. The stock's run-up doesn't quite match up with Caterpillar's abysmal Q2 performance, nor does it seem justified based on yet another guidance downgrade, a fresh round of restructuring, and management ruling out any hopes of a recovery in end markets anytime soon. Investors perhaps failed to see the bigger picture beyond the headlines that highlighted how Caterpillar's Q2 earnings had surpassed the Street's estimates. However, it isn't all rosy, as the following five charts reveal. 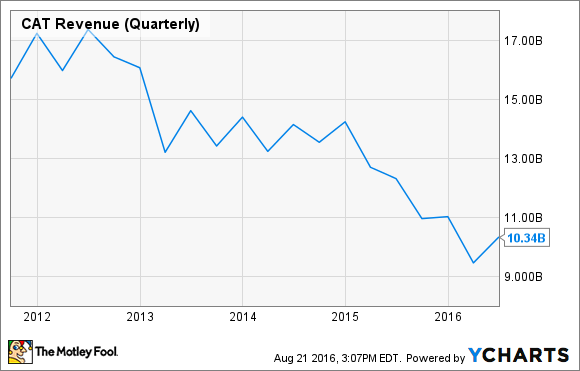 While the mining industry is still in the doldrums, lower oil prices have severely hurt demand for equipment and engines from the oil and gas sector. Caterpillar isn't the only one to suffer: Peer Cummins Inc.'s (CMI 2.72%) off-highway engine sales plunged 52% during the first half of the year. Unfortunately, a recovery is still far off, and Caterpillar once again downgraded its revenue outlook for 2016. It now expects to generate only about $40.5 billion in revenue at the upper end of its guidance range, representing 18% and 26% declines from its 2015 and 2014 revenue levels, respectively. 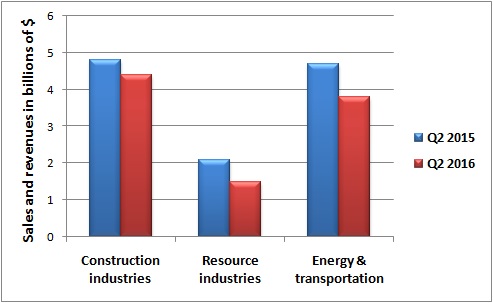 Resource industries swung to a loss of $163 million in Q2 from a profit of $27 million in the year-ago period as sales slipped 29% on lower volumes. Prices of key commodities like iron ore may have recovered lately, but miners are putting off big-ticket projects until prices stabilize at profitable levels. Mining giant BHP Billiton (BHP 3.28%), for instance, aims to further slash its capital and exploration expenditures by roughly 20% in fiscal 2017 after having already brought down its capex by a whopping 42% during the fiscal year that ended June 30, 2016.

The pain could last much longer: Caterpillar just revealed plans to stop taking orders for some of its mining products and lay off nearly 200 workers as it kicks off a fresh round of restructuring in its mining-equipment business.

Caterpillar witnessed widespread weakness across all geographic areas in Q2, with sales from the North America, Asia Pacific, and EAME regions each slipping by mid-teen percentages. Latin America, however, was the weakest link, with sales tumbling 31% year over year. Caterpillar's construction and energy and transportation businesses reported 32% and 38% lower sales, respectively, from the region. 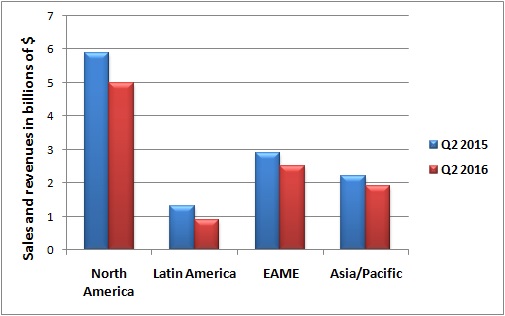 Latin America, which contributed 10% to Caterpillar's total revenues in 2015, is among the company's key growth markets, but the recession in Brazil is hurting the company. How bad are things, really? Here's what Mike DeWalt, VP of Caterpillar's financial services division, had to say about the Brazilian construction market during Caterpillar's Q2 earnings call: "North America is still well below the peak. Brazil is, wow, so far down you can hardly see it." Ouch!

Caterpillar's backlog -- a vital indicator of future potential revenue -- is hitting alarmingly low levels as new equipment order rate remains low. It ended Q2 with a backlog of $11.8 billion, down 10% sequentially and 20% year over year. 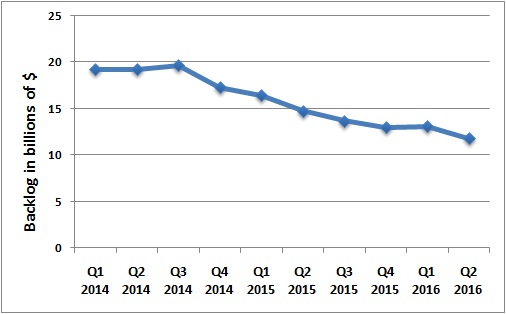 Caterpillar's construction-equipment business accounted for almost two-thirds of the decline in backlog as seasonal selling picked up. However, end-user demand from every important market, including North America, is showing signs of stress. This weakness in construction markets comes at an inopportune time, when Caterpillar is already fighting headwinds in the mining and oil and gas markets.

Profits are hard to come by

Caterpillar's EPS was up sequentially, which is natural as the second quarter is traditionally a stronger one for the company. Its earnings, however, came in 29% lower year over year. 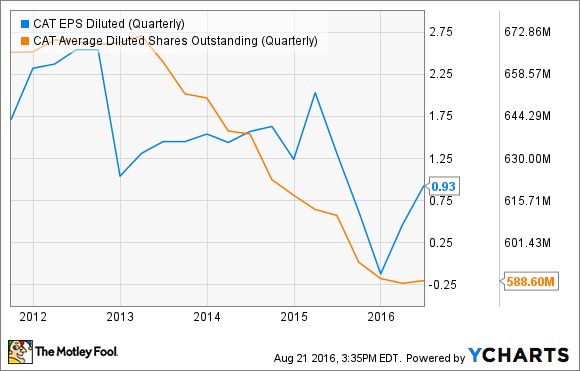 Note how Caterpillar's EPS has fallen over the quarters despite aggressive share repurchases that can indirectly push EPS up. Caterpillar is striving to boost margins through cost control, but its efforts are clearly falling short due to the dire state of its end markets. The company now expects to earn only $2.75 per share at the mid-point this year on lower revenues and higher restructuring costs. That's less than half of what it earned in 2014.

Clearly, it will be a tough road ahead for Caterpillar as it scrambles to get back on the growth track again.