So what: Driving DRDGOLD's decline was the release of a trading statement, which is a requirement of South African-listed companies if they determine that their financial results will differ by at least 20% from the previous period. In DRDGOLD's trading statement, it estimated that its headline earnings (a non-GAAP number) would be between $0.12 to $0.13 per share, which represents an increase of 23% to 34% from the prior period. That said, earnings per share are expected to be between $0.14 to $0.15 per share, which is 12% to 20% lower year over year. Driving that decline are non-recurring items that boosted earnings in the prior period by $0.05 per share. That said, the company did not provide any further details, and as a result, the market is taking a "sell first, ask questions later" approach to this news.

Still, even after today's sell-off, DRDGOLD's stock is up more than 300% since the start of the year. That's due in part to a stronger gold price, which is up 16% over the past year, as well as a stronger U.S. dollar. Because DRDGOLD sells gold in dollars but pays expenses in rand, its cash flow increases when the dollar appreciates versus the rand. That's just what has happened over the past year, with the rand down 9% against the dollar. That's driving big gains for South African mining companies like DRDGOLD, Randgold Resources (NYSEMKT: GOLD), AngloGold Ashanti (NYSE:AU), and Gold Fields (NYSE:GFI), which are all up more than 70% since the start of the year: 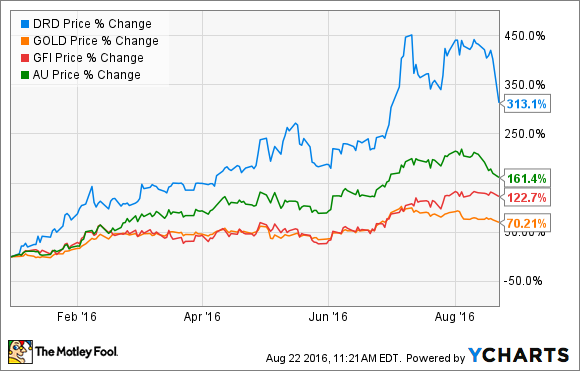 The combination of higher gold prices and a depreciating South African rand relative to the dollar have the potential to drive even more cash flow into the coffers of South African gold miners. According to a research note by Moody's, AnglogGold Ashanti and Gold Fields could generate an additional $120 million and $50 million, respectively, in free cash flow in the second half of this year if gold averages $1,300 an ounce and the rand-to-dollar exchange rate is 15. Meanwhile, if the rand-to-dollar exchange rate is 16, gold could slump to $1,200 an ounce, and cash flow would still increase to a projected $185 million for AlngloGold Ashanti and $135 million for Gold Fields. Randgold and DRDGOLD would enjoy similar boosts in cash flow depending on the gold price and exchange rate, which is why their stock prices more than doubled this year.

Now what: While DRDGOLD's stock is slumping after it released a trading statement, that decline is nothing more than profit-taking from investors just in case its actual results detail a material problem. Otherwise, the South African gold miner and its peers will continue to benefit from the dual headwinds of higher gold prices and a weaker rand, which is driving their cash flows higher.