What: Investors in Medivation (NASDAQ:MDVN) are having a pleasant start to the trading week. Shares of the cancer-focused biopharma are soaring 19% higher as of 9:39 a.m. EDT after news broke that Pfizer (NYSE:PFE) has won the bidding war to acquire the company.

So what: Pfizer has agreed to pay $81.50 per share to buy Medivation, which values the enterprise at roughly $14 billion. Pfizer stated that it plans on financing the deal with cash on hand and the boards of both companies have already unanimously approved the deal.

Ian Read, Pfizer's CEO, offered up his enthusiasm for the transaction by saying:

The addition of Medivation will strengthen Pfizer's Innovative Health business and accelerate its pathway to a leadership position in oncology, one of our key focus areas, which we believe will drive greater growth and scale of that business over the long-term. This transaction is another example of how we are effectively deploying our capital to generate attractive returns and create shareholder value.

David Hung, Medivation's founder and CEO, also had a lot of good things to say about the deal:

We believe the combination with Pfizer is the right next step in our growth trajectory and is a testament to the passion and dedication by which the Medivation team has delivered on our mission to profoundly transform patients' lives through medically innovative therapies. This compelling transaction will deliver significant and immediate value to our stockholders and provides new opportunities for our employees as part of a larger company.

In addition, since Medivation is already a highly profitable organization, the deal is expected to be accretive to Pfizer's diluted earnings per share after closing. Management is projecting $0.05 in additional EPS in the first full year after the deal closes, with growth thereafter. The deal is not expected to impact the company's financial guidance for 2016.

Pfizer expects that the deal will close in the third or fourth quarter of this year.

Now what: Pfizer's interest in Medivation can be traced to the massive success of Xtandi, the company's hormone therapy that has rung up $2.2 billion in worldwide net sales over the past four quarters as a treatment for prostate cancer. Medivation markets Xtandi worldwide with the help of partner Astellas Pharmaceuticals, and the drug's massive success has attracted the attention of several big pharma companies.

Earlier this year, the company even caught a takeover bid from Sanofi for $9.3 billion. Medivation quickly rejected the offer, which started a bidding war, bringing us to today's news of a $14 billion takeover bid from Pfizer.

Paying $14 billion might sound like an extremely high price for Medivation since its portion of the Xtandi profits were less than $1 billion last year, but the price becomes more reasonable when you consider the company's pipeline. Xtandi is in late-stage clinical trials as a treatment for other prostate cancer indications, and it's also being researched as a potential treatment for breast and liver cancer, too.

Beyond Xtandi, Medivation's pipeline includes two development-stage compounds -- talazoparib and pidilizumab -- which are in late-stage trials as potential treatments for BRCA-mutated breast cancer and diffuse large B-cell lymphoma, respectively. If these compounds work out, then Medivation's top line would certainly have had a lot more room to run.

Congratulations are in order to Medivation's management team, who simply have a stellar track record of value creation. Long-term shareholders of this company have made out like bandits and have earned market-smashing returns. 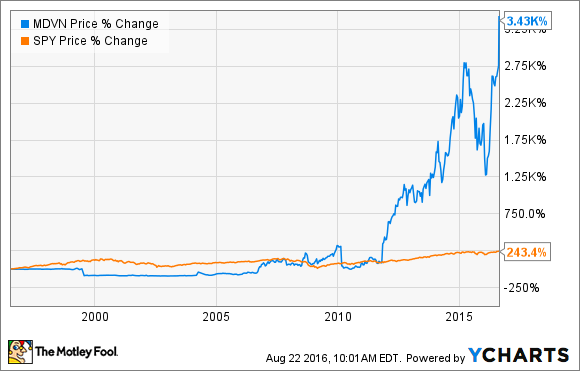