Though Costco (NASDAQ:COST) may be known for "frills" like above-average employee pay, when it comes to managing its balance sheet, it is ruthlessly efficient. This can be observed in the company's inventory turnover ratio, or the number of times it sells its average level of inventory over the course of a year.

What is inventory turnover?

Thus, we calculate the inventory turnover ratio as follows:

This ratio tells us that, on average, Costco turned over its inventory 11.64 times during its 2015 fiscal year.

We can go one step further to calculate how long it takes Costco to sell its average unit of inventory by dividing 365 by the company's inventory turnover ratio of 11.64. This will tell us that Costco's average dollar of inventory sat in its possession for about 31.4 days before it was sold.

What it means for the business

1. Financing
Retailers often take delivery of inventory before paying for it. In a perfect world, every retailer would sell their inventory before they have to pay for it. Costco explains this clearly in its financial filings, stating that "to the extent that sales increase and inventory turnover becomes more rapid, more inventory is financed through payment terms provided by suppliers rather than by our working capital." In other words, higher inventory turnover enables Costco to rely on its suppliers' capital to finance its inventory, rather than the capital of its shareholders or creditors.

2. Reduced risk of obsolescence
Inventory goes bad. For grocers, the biggest risk is that food items will go stale before sold. In electronics retail, the biggest risk is that a newer, better gadget comes out before it clears out its existing inventory. More inventory turns reduce the risk that a retailer has to liquidate inventory at suboptimal prices, or charge it off entirely.

3. Ability to operate at lower gross margins
Higher inventory turnover means that operating expenses -- rent, wages, and utilities, for example -- can be spread across a greater dollar volume of sales. Low prices afforded by low margins are the reason why so many customers shop at Costco in the first place; its customers want a good deal.

Inventory turnover will vary dramatically by the type of business, and even among retailers. Product mix is important. While a carton of eggs may sell in just a few days, a diamond ring might sit on the shelves for months, for example.

The chart below compares inventory turns at Costco to Target (NYSE:TGT), Restoration Hardware (NYSE:RH), and Tiffany & Company (NYSE:TIF) during their most recent fiscal years. 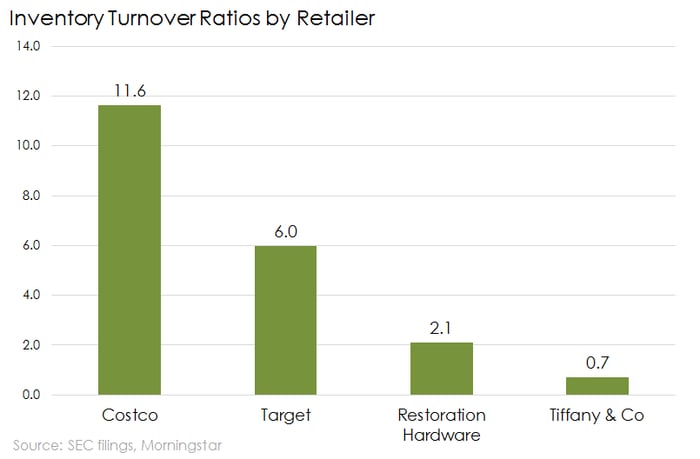 Notice that Tiffany & Co.'s low inventory turnover ratio of 0.7 means that its average dollar of inventory sits in its possession for a very long time -- more than 521 days, on average. This isn't all that surprising, given that a simple diamond engagement ring could come in millions of different combinations of stone quality, band type and design, and price point.

Similarly, Restoration Hardware sells high-end home furnishings to particularly picky buyers. A simple armchair on the company's website comes in as many as four styles, five wood finishes, and 45 different leathers! That kind of selection naturally requires substantially more inventory for each dollar in sales.

Contrast these two luxury businesses with Target and Costco, which primarily sell food products and home goods. It's only natural that their product mix of commodity goods would get turned over much faster than specialty furniture or jewelry. (That a significant portion of space on Costco and Target shelves is dedicated to perishable foods also necessitates faster inventory turns, as too much inventory will lead to spoilage.)

Inventory turnover is important for any business, but it is especially important in big box and warehouse retail, where the biggest difference between retailers is price. Costco's inventory turnover ratio, long the envy of the retail industry, tells us that a key pillar of its business model -- industry-leading inventory efficiency, which allows it to charge lower prices -- gives the company a competitive advantage.