Suicide Squad has generated over $500 million in worldwide grosses since its Aug. 5 debut. Credit: Warner Bros.

For all the talk about box office failures for Time Warner, Inc. (NYSE:TWX), you'd think the stock would be sinking like a stone. Instead, it's soaring like an eagle. Shares of the DC Comics parent are up nearly 25% year to date on positive trends in the business -- though you wouldn't know it to look at the second-quarter results. 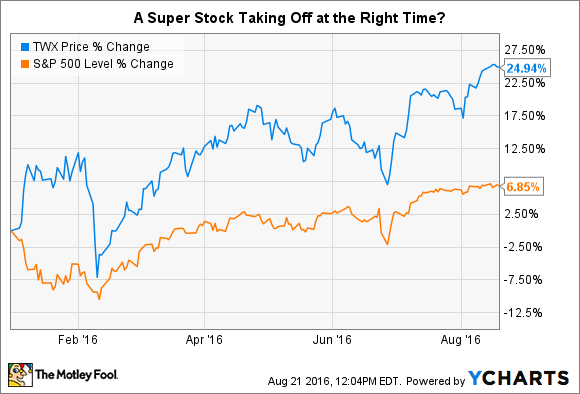 Revenue and adjusted operating income declined 5% each while per-share earnings improved 3% thanks to $1.6 billion in stock buybacks. Since Jan. 1, management has repurchased and retired 23 million shares at an estimated average price of $69.56 a share. Another $3.4 billion in capital remains available for buybacks under the current share repurchase program, Warner said in a press release. Funding should come from a combination of cash on hand (about $2.5 billion currently) and cash from operations (roughly $4 billion annually).

Three places to search for kryptonite

Will the buybacks and business momentum lead to greater returns from here? A lot depends on how Warner's varying business units perform. Let's break them down one by one.

Warner's broadcast operations are among the biggest in the business. From TBS to Turner Classic Movies to TNT and CNN to Cartoon Network and Adult Swim to a 50-50 partnership with CBS (NASDAQ:VIAC) for The CW, Time Warner's collection of channels and original programming were responsible for $10.596 billion in revenue and $4.087 billion in operating profit last year, S&P Capital IQ reports.

Those are big numbers, to be sure. In the case of operating profit, that $4-plus billion also represents over half of what the entire company produces in a given year. You'd think that would be a risk given the general state of broadcast TV in the Netflix era, but that doesn't seem to be the case. Instead, TBS and TNT finished Q2 as "the two highest rated ad-supported cable networks in primetime among adults 18-49," Warner said in a press release. As a result, Turner saw revenue and operating profit improve to $10.975 billion and $4.218 billion, respectively, over the trailing 12 months ended June 30, Capital IQ reports.

No longer just a home for movie reruns, HBO continues to have one of the industry's hottest and most successful lineups of original programming. Game of Thrones still leads the pack, with 8.9 million live plus same-day viewers for its July finale. Yet there are other successes.

From Emmy contenders Veep and Silicon Valley to lesser-knowns such as Ballers and Togetherness, HBO has been producing hit after hit. Single-season busts such as Vinyl are a rarity for the network, which, according to S&P Capital IQ, has generated $5.75 billion in revenue and $1.87 billion in operating profit over the trailing 12 months.

A separate cut of Batman v Superman: Dawn of Justice promises to give fans an even darker look at the DCU. Credit: Warner Bros.

Despite terrible reviews and mixed fan reaction, DC movies such as Batman v Superman: Dawn of Justice and Suicide Squad are helping to boost profits. Operating margin in the division improved from 9.5% in 2010 to 10.9% last year, and 12.1% over the trailing 12 months.

There's also the small screen to consider. Warner Bros. Television is responsible for producing a wide range of popular programs, including 2 Broke Girls and The Big Bang Theory for CBS and Blindspot for NBC. Fees for these and other hits should help to offset any losses in the movie group. Yet it's the latter that matters most.

I think what we're seeing is that the big franchises mean more than ever. If you look at the top six films, they represent approximately 35% of the domestic box office. So when you think about what we laid out a couple of years ago as the strategy, we thought that the slate needed to be kind of anchored by the big franchises like Fantastic Beasts and Where to Find Them, the DC movies and the LEGO movies, and we're executing on that.

If Warner Bros is executing and Turner is still growing, is it enough to warrant a purchase of Time Warner stock at current prices -- even if HBO is growing slowly? I think so. Today's investors are getting a well-positioned business and one of the biggest names in Hollywood for less than half the market cap of either Disney or Comcast Corp., Warner's two closest peers. Don't expect that gulf to last forever.