Buy them cheap and hold them for the rest of time.

The best holding period is forever, according to Warren Buffett, and we here at the Fool agree. Buying shares of high-quality businesses and holding them for years is the best way to compound your wealth. And if you can buy those shares at a discount to fair value, even better. We asked five of our top Foolish contributors to discuss their favorite forever stock. Here's what they had to say.

Sean Williams: Feel free to call me a little crazy after its better-than-90% tumble during the Great Recession, but I believe banking giant Bank of America ( BAC 0.64% ) is an undervalued stock that investors can sock away for a really long time. I've been a shareholder since November 2011, and I have no intentions of selling anytime soon.

The biggest intermediate-term catalyst for Bank of America is that it's putting all of its Great Recession issues firmly in the rearview mirror. Bank of America now has a considerably healthier cash position and balance sheet than it had prior to the Great Recession, and the more than $61 billion in settlements paid to the Justice Department are a thing of the past. We, as investors, are getting a much cleaner view of what Bank of America is capable of from an operating perspective.

From a fundamental perspective, Bank of America is dirt cheap. The company is valued at just 64% of its book value and is trading below its tangible book value (a more commonly used value metric for banks) of $16.68 as of the second quarter. It's also at less than 10 times forward earnings and has the ability to further cut costs to buoy its profits and margins. As consumers shift to online banking, and Bank of America invests in lower-cost, higher-efficiency tools like its mobile app, the company has an opportunity to reduce its branch presence and save on costs.

If you're looking for a set-it-and-forget-it candidate that's currently cheap, I'd suggest taking a closer look at Bank of America.

A long history of adaptation

Tim Green: If you're planning to hold on to a stock for the long haul, it's best to stick with companies that have decades-long track records of success. In the world of tech stocks, International Business Machines ( IBM 0.90% ) fits the mold.

IBM is currently going through a major transformation, shifting its business to the cloud and sharpening its focus on key areas like analytics. This isn't the first major revamp IBM has gone through, and it won't be the last. The company has been successfully adapting to a changing technological landscape for the past century, and while the transitions are always rough, IBM has emerged stronger each time.

IBM's strategic imperatives, the group of businesses the company is banking on for future growth, generated $30.7 billion of revenue over the past year. Cloud-as-a-service has reached a $6.7 billion annual run rate, with growth in cloud-based software helping to counteract weakness in IBM's legacy software products. Declines in legacy businesses are still causing IBM's total revenue to slump, but the company should eventually turn the corner.

IBM expects to produce at least $13.50 in adjusted earnings per share this year, putting the stock price at less than 12 times that number. Earnings have been in decline throughout IBM's transformation, but if the company succeeds in shifting its business to the cloud, earnings growth should eventually return. If your investing time frame is long, IBM is a stock to consider.

Neha Chamaria: My forever stock would ideally be a diversified company that has a solid economic moat and foothold in the industry, is an innovative leader, boasts strong margins and financials, has a track record of delivering value to shareholders, and exhibits tremendous growth potential. Dow Chemical ( DOW ) fits the bill.

A portfolio of five business segments that cater to nearly every key industry across 180 countries has enabled Dow Chemical to grow its margins significantly in the past five years despite lower revenue. The conglomerate's return on equity hit a high of 37% in 2015. 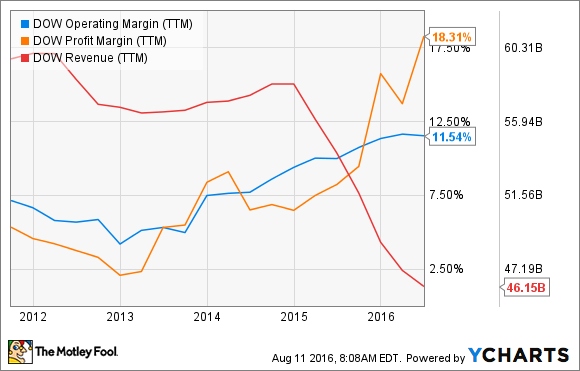 At the same time, Dow's free cash flows have more than doubled in the past five years even as the company deleveraged its balance sheet. Those cash flows are likely to trend higher as Dow is in a major transition mode. On the one hand, it is aggressively restructuring to eliminate costs, while on the other it is preparing to combine with heavyweight DuPont in a merger of equals this year that will create the world's largest agricultural chemicals and second-largest materials company. If the merger -- which is awaiting regulatory approval -- goes through, Dow should be positioned for significant growth in the years, or even decades, to come.

The best part is that investors can be part of Dow's growth story at an unbeatable discount today. At merely eight times trailing earnings, Dow stock is currently trading at less than half its five-year average and industry P/E. Top it off with a dividend yield of 3.4%, and Dow looks likes a great stock on sale that you can buy today and hold forever.

The cheap way to build a real estate empire

Matt DiLallo: Real estate is the ultimate buy-and-hold investment because it does two things over time: It throws off a constant stream of cash flow, and it tends to appreciate in value at least as fast as inflation. While there are plenty of investment options to gain exposure to the sector, Brookfield Property Partners ( BPY ) is a top choice because of its diversification across real estate strategies and because it is very undervalued.

Brookfield Property Partners' foundational assets are iconic office properties in gateway markets like New York, London, and Toronto, as well as premier retail properties in the United States. In addition to that core, the company has opportunistic investments in portfolios that own multifamily properties, industrial facilities, hospitality properties, and self-storage units. This robust real estate portfolio does two things: It throws off a growing stream of cash flow, which supports Brookfield's generous 4.75% yield. Furthermore, thanks to appreciation through higher rents and development activities, Brookfield projects to grow its payout by 5% to 8% per year, which should cause its real estate to appreciate in value by 6% to 9% per year.

Those characteristics alone would make Brookfield Property Partners a great buy-and-hold investment. However, what makes it an even more compelling buy is the fact that it's undervalued by around 25% just based on the equity value of the company's real estate holdings. Over the years, Brookfield has invested $22 billion of capital into real estate assets; however, its current market capitalization is around $16 billion. This gap between the underlying asset value and the company's valuation suggests that investors buying today are getting top quality real estate for just $0.75 on the dollar.

A key cog in global payments

Jason Hall: American Express Company ( AXP 3.04% ) has had a tough go of it over the past year or so. The company chose to walk away from a 15-year-plus partnership with Costco Wholesale, which accounted for some 10% of total Amex cardholders, when Citi and Visa made a better offer. Since the start of 2015, American Express has seen its revenue and profits fall: 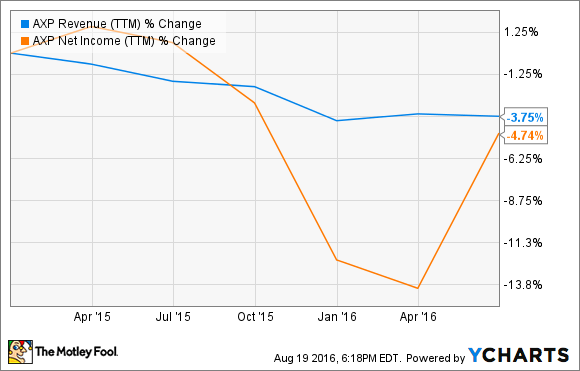 The market has reacted as one would expect, sending Amex shares down over this period. But I'm convinced that Mister Market is taking a short-term speed bump for American Express and treating it like a permanent problem. Shares are down 30%, but the company's valuation is down even more: 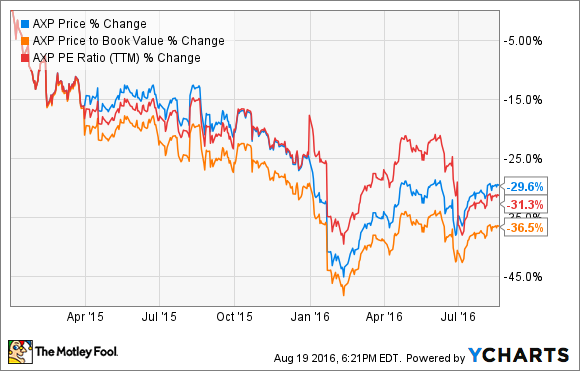 To put it simply, to me this is a case of the market throwing the baby out with the bathwater, and that's created a great opportunity for long-term investors to buy a world-class business at a nice discount to its historical book value and earnings multiples.

Yes, it's been an ugly year, and management has work to do to rebuild the lost business in the wake of the Costco fallout. But American Express remains a wonderful business and a powerful brand. The long-term prospects remain great as more of the world's population enters the middle class, and electronic payments become more common around the world.

If you're looking for an undervalued business that you can buy and hold forever, Amex should be near the top of your list.