According to some reports last week, Enterprise Products Partners (NYSE:EPD) is interested in acquiring Williams Companies (NYSE:WMB). Enterprise's initial bid came shortly after Williams' merger with Energy Transfer Equity (NYSE:ET) was terminated, following a bitterly fought court battle. While Williams reportedly rejected that initial bid and developed a new go-forward strategy, that has not diminished Enterprise Products Partners' interest in pursuing a merger. That said, while the deal has merits, it has several obstacles to overcome.

Enterprise Products Partners' interest in Williams Companies is about three things: value, optimization, and growth. Regarding value, Williams Companies' stock is down roughly 45% over the past year, as a result of its merger debacle with Energy Transfer Equity and the impact of the energy market downturn on its business. Meanwhile, Enterprise's unit price is roughly flat over that same time: 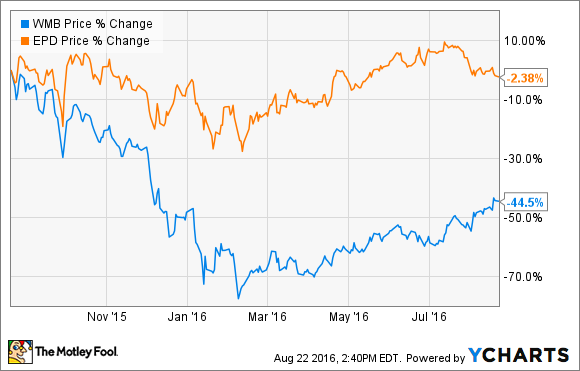 Because of that value gap, the acquisition would likely be meaningfully accretive on a per-unit basis.

Second, Williams' MLP Williams Partners (NYSE: WPZ) operates an excellent natural gas liquids (NGL) business in the Northeast, thanks to its prime position in the Marcellus shale. Not only is that an area where Enterprise Products Partners lacks scale, but it also controls the ATEX pipeline, which takes NGLs from the Northeast to the Gulf Coast marketplace. It could generate significant revenue and cost synergies by linking those two businesses.

Having its credit rating downgraded could significantly increase Enterprise Products Partners' borrowing costs. For perspective, earlier this year it was able to borrow $1.25 billion, including pricing $575 million of 10-year debt at 3.95%. Williams Partners, on the other hand, issued $1 billion of 10-year debt earlier this year at a 7.85% interest rate. Enterprise Products Partners' stronger credit rating is a clear competitive advantage right now, and one it would not want to lose by acquiring Williams Companies.

This suggests that Enterprise would need to take a different path, such as the one it made when it bought its general partner in 2010. However, such a deal structure would likely trigger taxes for Williams' investors, which might not be a palatable solution given what they have gone through over the past year. In other words, Enterprise might need to pay up to convince Williams Companies' investors agree to a merger, but it needs to avoid taking on debt to do so, which was Energy Transfer Equity's downfall.

While Enterprise Products Partners' interest in Williams Companies certainly makes sense from a strategic and value standpoint, the proposed combination still raises questions. Most pressing is whether Enterprise can structure a transaction to win the support of Williams' investors without tarnishing its prized credit rating. If it can figure out a way to appease everyone, then this combination could really pay off in both the short and long term.