What: Gold slumped today, finishing at its lowest level in a month after investors grew worried that the Fed would signal that interest rates would rise when it meets this week. Those fears sent gold and silver mining stocks sinking, with Endeavour Silver (NYSE:EXK), Hecla Mining (NYSE:HL), Kinross Gold (NYSE:KGC), McEwen Mining (NYSE:MUX), and Silver Standard Resources (NASDAQ: SSRI) taking the brunt of the market's punishment: 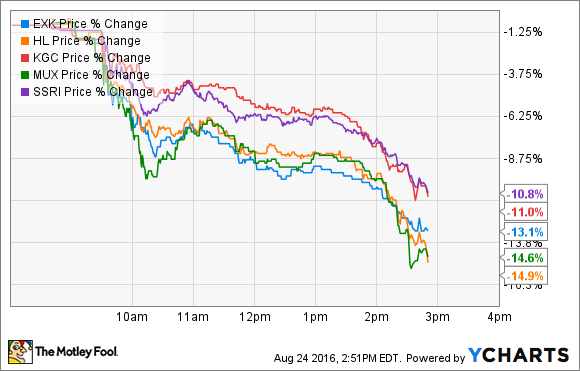 So what: Gold bugs are growing uneasy given recent comments by members of the U.S. Federal Reserve. On Sunday, for example, Vice Chairman Stanley Fischer said in a speech that the U.S. was "close" to hitting its targets for employment and inflation. That statement seemed to imply that the Fed might hike interest rates this year. Meanwhile, Fed Chairwoman Janet Yellen is scheduled to speak this Friday at its annual retreat in Jackson Hole, Wyoming. Some analysts expect her speech to signal that the Fed is ready to raise rates, which would be bad news for gold.

That said, while gold and silver mining stocks are slumping badly today, investors have done very well this year: 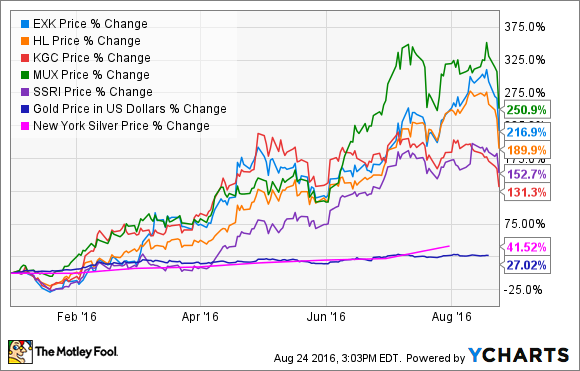 Driving those immense gains is the combined impact of higher precious metal prices and dramatic cost reductions by mining companies. For example, Hecla Mining's cash costs were down by 32% per ounce of silver and 28% per ounce of gold in the second quarter. Those lower costs, when combined with higher production and prices, fueled a remarkable 164% increase in Hecla Mining's underlying earnings. Silver Standard Resources, likewise, pushed its costs down, which have come in below its guidance so far this year. By combining those lower costs with improved pricing, Silver Standard Resources reversed its year-ago loss and increased its cash flow. Meanwhile, Kinross Gold, McEwen Mining, and Endeavour Silver each had similar stories.

However, investors are fretting over the possibility that these companies will not continue to get an added boost their earnings and cash flow from rising silver and gold prices.

Now what: After a triple-digit rally to start the year, precious metal mining stocks are experiencing a bit of a pull-back due to profit taking amid concerns about what the Fed will do next. If the Fed stands pat, it's possible that today's decline could be a bump in the road. However, if the Fed decides to act, it could take the wind out of the sails of mining stocks -- at least until inflation fears return to the market.