Teck Resources Ltd (NYSE:TECK) is a diversified Canadian miner with key operations in a deeply out-of-favor sector, and it's investing in another commodity market that's seen multiple bear markets since mid-2014. That's a good reason for investors to ask: How risky is Teck Resources Ltd? The answer may surprise you.

Teck's current operations are split between metallurgical coal (about 35% of the business), copper (35%), and zinc (30%). Even though that's a fairly decent split among different commodities, coal kind of stands out. If you pay even the slightest bit of attention to the news, you know coal is a dirty fuel, and it's deeply out of favor.

This is something to keep in mind, but there's an important distinction at Teck. Coal is generally used for two things: generating power and making steel. Thermal coal is what's used by electric utilities, and it's facing big headwinds from clean energy alternatives, generally low prices for key alternative natural gas, and too much supply. Steel-making coal's material headwind today is "just" oversupply. So, yes, steel-making coal is in the dumps relative to a few years ago, but once supply and demand balance out, a price recovery will face fewer headwinds. The coal issue, then, is a problem, but it may not be as big a risk as it seems.

The other notable change taking place at Teck is a multibillion-dollar investment in the Fort Hills oil sands project, along with partners Total (NYSE:TTE) and Suncor Energy (NYSE:SU). Suncor owns roughly 51% of the project, with Teck holding a 20% share, and Total the rest. (Total recently sold part of its position to Suncor to reduce its exposure to the oil sands region.)

The project was first envisioned before oil prices hit the skids in mid-2014, when spending big money to invest in oil seemed like a good idea. Now, however, the project looks less desirable. And to be honest, it is, in many ways, since oil sands operations tend to be relatively expensive to run.

That said, the project is slated to start producing oil around the end of 2017 and has a 50-year reserve life, providing plenty of time for the supply/demand imbalance in the oil space to work itself out. Note that the project wasn't directly impacted by the fires that halted some Canadian Oil Sands production earlier in the year. More importantly, Fort Hills will add a fourth major commodity to Teck's portfolio, increasing its diversification. And although it's an oil project, Canadian oil sands are mined, not drilled, so it's well within Teck's comfort zone. Despite the headwinds in oil, Fort Hills still looks like a good long-term investment for Teck.

That said, Teck's interest is non-operating, with Suncor, which is heavily focused on working the oil sands, actually running Fort Hills. So Teck doesn't really control its own destiny at Fort Hills. But based on Suncor's history, that shouldn't be too much of a concern.

This brings up another big issue for Teck: its balance sheet. Mining is a cost-intensive business, and building new mines requires huge up front spending with no revenue showing up until the project is complete. That proved to be a one-two punch for Teck. Its revenues were quickly crimped when commodity prices started to fall in 2011, and at the same time, it could only cut spending so much because of the oil sands project. 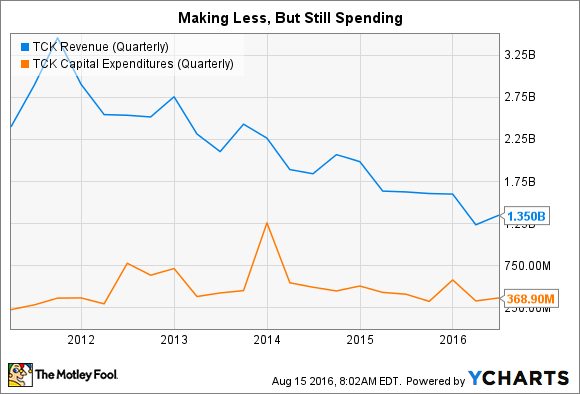 One notable impact of this can be seen on the company's balance sheet. Debt levels increased roughly 55% between 2013 and 2015, with cash falling around 30% over the same span. For reference, the Fort Hills project got the final go ahead in late 2013, only half a year or so before the oil market hit the skids in mid-2014.

The company, however, has been working hard to make sure it survives to fight another day. For starters, Teck has been cutting costs where it can, like every other miner. Second, it cut its dividend to save cash. Not the most shareholder-friendly move, but a good call nonetheless. Most importantly, though, it recently extended the maturity of its debt so it doesn't have any material debt maturities until 2021. That's well after the oil is expected to start flowing at Fort Hills and provides plenty of leeway for commodity prices to recover.

So, with commodity prices strengthening and debt maturities pushed out, mere survival isn't as big a concern at Teck as it was a year or so ago. That's a relief, but you should still keep an eye on the balance sheet as 2021 approaches. If Teck's business doesn't keep picking up, debt could resurface as an important issue, even though it doesn't appear to be a big one today.

How risky is it?

There are really two answers to the "How risky?" question at Teck. The first is that it's a lot less risky then it was even a year ago. A material amount of hard work has gone into that, including cost-cutting, the progress made at Fort Hills, and the extension of the due dates on its debt. If you're looking for a company with an improving outlook, Teck might be worth a deep dive.

The second answer is that Teck is still a miner, and it faces all the risks miners face. So, things look better today on the risk front, but it's far from a low-risk investment option. Commodity prices will always remain a big piece of the puzzle. And until Fort Hills is complete, there's notable execution risk, too, even though the project is currently moving along reasonably well. If you can't handle those kinds of risks, then Teck isn't appropriate for your portfolio.