It's critical for investors in the automotive industry to keep tabs on the front lines. Keeping abreast of vehicle-quality studies and consumer-satisfaction surveys can give you an edge to understanding which brands are surging and which might be falling off in certain categories.

Just this week, the American Customer Satisfaction Index released a report that showed improvement from Detroit automakers and a not-so-surprising decline for Volkswagen amid its emissions scandal. Here's a look at some of the key takeaways.

Car-buyer satisfaction improved, as domestic and mass-market brands all reported rising satisfaction among consumers, according to ACSI. Consumer satisfaction increased 3.8%, to 82 on a 100-point scale. One interesting thing to note, right off the bat, was that the top tier of ranks wasn't dominated by luxury vehicles as has historically been the case.

Overall, the top-tier scores were evenly split between mass-market and luxury vehicles. Out of the 24 auto brands tracked by the study, 16 improved and five declined. Three of those five declining brands were premium.

"The rise of mass-market vehicles may well be at the expense of luxury brands in the sense that buyers now see little differentiation between luxury cars and regular ones," says Claes Fornell, ACSI Chairman and founder, in a press release. "If there is little difference, why pay more? Exclusivity may not be enough."

How about those Detroit autos?

In good news, at least for fans of domestic automakers Ford Motor Company (NYSE:F) and General Motors (NYSE:GM), all domestic autos improved their customer satisfaction this year, and the highest-scoring car is now an American brand, thanks to Ford's Lincoln.

Lincoln took the top spot with a 5% jump, to a score of 87, on the same 100-point scale by ACSI. Second place was owned by Honda, which posted an 8% improvement, to 86. Luxury brands finally cracked the top end, at third place, when BMW and Toyota tied with a score of 85. Further, Lexus, which lost its first-place position to Lincoln, was matched by GMC, Subaru, and Nissan's Infinity, at 84.

Looking for the biggest loser was an easy task. Volkswagen (OTC:VWAGY) had a not-so-surprising decline thanks to its very public diesel-emissions scandal, dropping 3%, to 78, which was the lowest score among mass-market brands. It was also the second-largest drop, outdone only by Honda's Acura, which declined 8% compared to the prior year's score.

"The combination of fines and fallen stock price are a big hit to Volkswagen's finances, but it may prove even harder to recover from the reputational hit the company will take for deceiving customers and the general public," says David VanAmburg, ACSI director, in a press release. "Many customers or would-be customers could be turned-off of VW for life and it's hard to put a value on that." 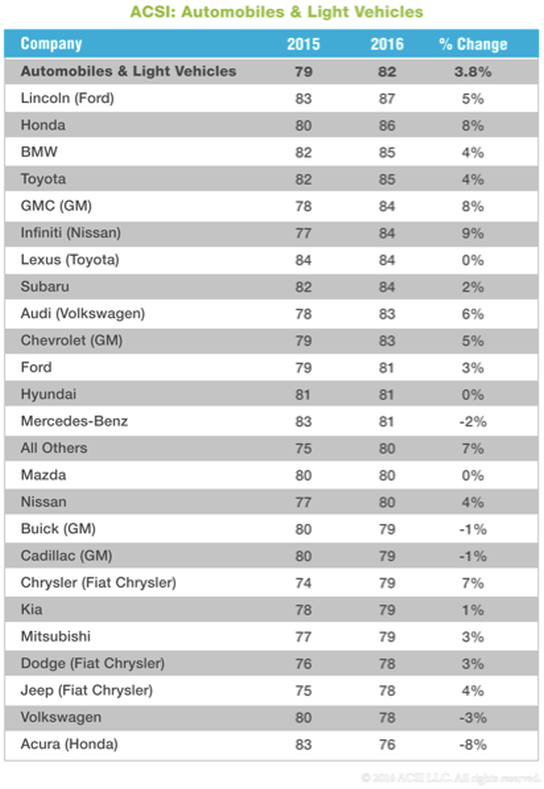 The narrowing gap between scores of luxury brands and mass-market brands has been a work in progress for some time. That's mainly because automakers like Ford and General Motors are developing more expensive model trims to drive pricing higher -- more options equates to higher margins.

While it's not a surprise to see the gap narrow, this is great news for Detroit autos, as their satisfaction scores increased. At a time when vehicle sales are likely peaking in the U.S. market, having a loyal and satisfied customer base could help protect market share without spending more on incentives and deals to convince consumers to continue buying from the brand. That's a big deal, and that's why keeping tabs on the front lines of how brands are viewed is important for investors.