Shares of online travel company Priceline Group (NASDAQ:BKNG) have been on the rise since the Brexit vote passed in June, and the run has continued after the company reported another solid quarter on Aug. 4. However, the company sports a higher valuation -- about 21 times forward earnings and a PEG ratio of 1.3. Is Priceline stock still a good buy for investors? 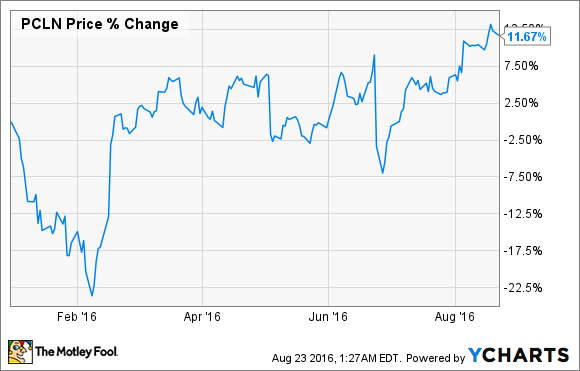 Priceline revenue was up 12.1% and 18.2% during the last quarter and fiscal year-to-date, respectively. Net income was up 12.3% year-over-year for both periods.

So what is driving this solid growth? Leading the way in the last year has been a 24% increase in room bookings. Rental car growth came in at 7.9% year-over-year, but average growth for this segment has historically been in the double digits. These areas offset the struggling airline ticket business -- the second quarter saw tickets fall 6.6%, down for the fourth quarter in a row.

However, the company does not seem all that worried, instead focusing on new room booking tools and other new services like Booking.com, Agoda, its Kayak travel search tool, and the Open Table restaurant software purchase from 2014.

So despite a few areas of weakness, the overall business is humming along. The first six months of 2016 are off to a much better start than last year when revenue growth came in at much lower levels. That said, is the return to double-digit growth sustainable?

Digital travel still on the rise

While booking vacations online has been around since the advent of the internet in the late 90's, that doesn't mean growth in the industry is drying up. The means by which Priceline generates sales is undergoing a facelift, and new opportunities are emerging.

Priceline breaks revenue into three categories: agency, merchant, and advertising. Advertising is by far the smallest segment but also the fastest growing -- this is how new proprties like Kayak and Open Table make money. Merchant services has been in decline and makes up about 20% of the top line. The merchant model comes into play, for example, when Priceline reserves a block of hotel rooms, marks up the price, and sells them to vacationers.

That leaves agency bookings, responsible for 70% of revenue. Here, Priceline collects a fee from third parties to list travel accommodations on its platform. Though this is the largest part of the business, it is still expanding quickly. Booking.com operates under this model and recently added its one-millionth property to its online listings. In the last two years, the site has doubled the number of available properties it offers.

But recently, consumer trends have shifted away from the traditional resort-style tourist. Rising in her place is a do-it-yourself, custom-built, and price-conscious vacationer willing to forgo an all-inclusive getaway for anything from a hotel room to an Airbnb room or even an entire property. The Priceline Group is capitalizing on this trend with sites like Booking.com, Asian-based Agoda, and even restaurant reservations with Open Table.

Also boding well for Priceline's future is the fact that the U.S. is still a growth market for the company. Though William Shatner as the "Negotiator" has been a TV commercial mainstay for years, Priceline is still working hard to expand stateside. During the previous earnings call, Chairman and interim-CEO Jeffrey Boyd said Europe is actually the company's oldest and most mature market.

The European business is still growing, albeit at a modest rate, but the U.S. and Asia are where the biggest opportunities lie (with the newer agency booking websites leading the way).

One point of concern brought up during the earnings call was the increased advertising spend. Operating expenses are up 19.3% year-over-year in the first half of 2016 with "performance advertising" costs accounting for a large part of the increase.

Performance advertising is paid when there are results from the ad, and the company acknowledges that pricing pressure has mounted over the last few years. Management offered few additional details, but they still view the expense as a good way to generate returns. 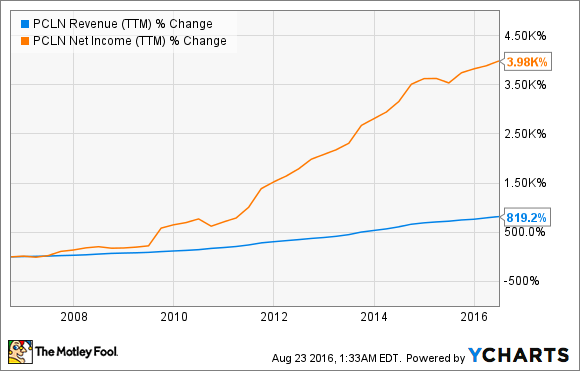 In spite of the increased expense, Priceline still looks like an attractive growth story. The company expects revenue and gross profit growth to come in the mid to high-teens for the third quarter. Even though shares may not be priced at bargain levels, the company's track record for consistent growth at both the top and bottom lines make Priceline an attractive consideration.