Please ensure Javascript is enabled for purposes of website accessibility
Log In Help Join The Motley Fool
Free Article Join Over 1 Million Premium Members And Get More In-Depth Stock Guidance and Research
By Matthew DiLallo – Aug 24, 2016 at 11:15AM

After steadily sinking over the past five years, silver is surging in 2016 and is up more than 40% since the start of the year. This rally is driving scorching gains for silver mining stocks, which are benefiting from the dual headwinds of falling costs and surging silver prices: 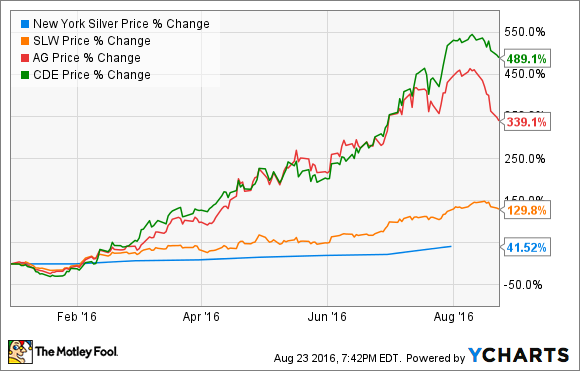 That rally is enabling several miners to quite literally cash in on the silver price rally.

A flood of cash

Diversified precious metals producer Coeur Mining (CDE -0.29%) is among the many miners that are reporting stunning growth in cash flow this year. During the second quarter, for example, Coeur Mining's cash flow from operations totaled $45.9 million, which was a remarkable 600% more than it pulled in just last quarter. After making investments, the company still produced $12.2 million in free cash flow during the quarter, which was $37 million more than it tallied in the prior quarter. That free cash flow, when combined with asset sales and an equity offering, bolstered the company's cash position to $257.6 million, which allowed it to repay roughly $100 million in debt shortly after the quarter closed, reducing its total debt outstanding by 20%.

First Majestic Silver (AG -1.46%) also reported strong growth in operating cash flow, which jumped 43% year over year to $23.5 million. Further, like Coeur Mining, it cashed in on its surging stock price by selling CAD$57.5 million in stock during the quarter. Because of that, it boosted its cash pile by $46.5 million, pushing it up to $108.2 million. That gave the company the capital to increase its capex program by $20.9 million, which accelerated several growth projects that have high internal rates of return.

Not to be outdone, precious metal streaming company Silver Wheaton's (WPM -0.34%) operating cash flow jumped 23% to $134 million. Meanwhile, it also sold stock during the quarter, which brought in $607 million of cash. Silver Wheaton put that money to immediate use, spending $800 million to acquire an additional 25% of the life-of-mine gold production from the Salobo mine.

More cash flow is on the horizon

These mining companies believe that they are well positioned to continue cashing in rising precious metal prices. In First Majestic Silver's case, it sees its full-year cash costs coming in 23% below its guidance while its all-in sustaining costs will be 7% below its initial guidance range. Because its costs are going down and the price of silver is going up, more cash should be flowing in First Majestic's direction.

Silver Wheaton, meanwhile, boosted its production forecast as a result of the Salobo acquisition. Given its already low cash costs thanks to its streaming agreements, the company is positioned to produce even more cash flow if gold and silver prices continue rising. CEO Randy Smallwood went so far as to say that the company "look[s] forward to demonstrating to investors how powerful our cash flow generation can be in an environment of increasing precious metals prices."

Coeur Mining, meanwhile, recently satisfied the minimum ounce obligation on its Franco-Nevada (FNV -0.42%) royalty. That triggered an improvement in the terms of that agreement and is expected to result in a meaningful increase in free cash flow at the company's Palmarejo mine in Mexico. Because of that, CEO Mitchell Krebs expects Palmarejo to be a "significant contributor to free cash flow going forward." On top of that, the company expects to save $9 million per year in annual interest expense after paying down debt. These two factors, when combined with its industry-leading cost reductions and higher silver prices, should enable the company to generate substantial free cash flow in the second half of this year.

The spike in the price of silver is having a noticeable impact on silver producers. Not only are their cash flows rising, but many took advantage of a surge in their stock price to raise capital. This cash infusion is enabling silver miners to cut debt and make investments that should keep the cash flow train rolling for as long as silver remains a hot commodity.

Matt DiLallo has no position in any stocks mentioned. The Motley Fool owns shares of Silver Wheaton. We Fools may not all hold the same opinions, but we all believe that considering a diverse range of insights makes us better investors. The Motley Fool has a disclosure policy.