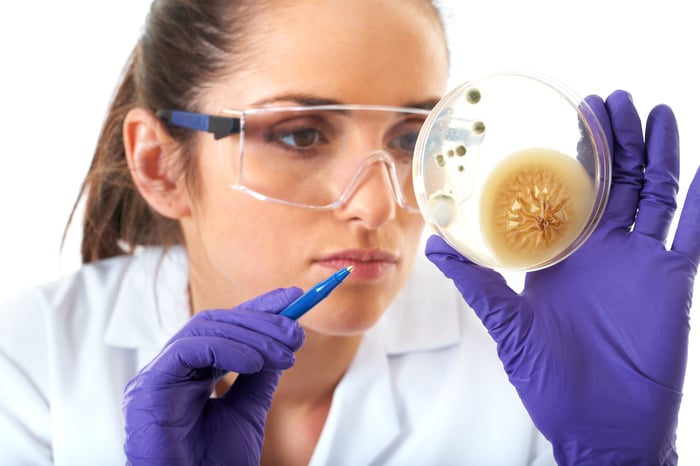 What: Shares of OraSure Technologies (NASDAQ:OSUR), a healthcare company focused on diagnostic products and specimen collection devices, are up 14% as of 11:45 a.m. EDT Wednesday after the company announced that it has won a new government contract.

So what: OraSure stated that it has been awarded a contract from the Department of Health and Human Services and BADRA to help fund the development of its rapid Zika virus test. The contract could be worth up to $16.6 million over a six-year period, which includes an upfront commitment of $7 million.

In response to winning the contract CEO Douglas Michels said, "We are grateful to BARDA for making this funding available as it will enable us to complete clinical and other activities required to obtain regulatory approvals for this product." He also added that a fast Zika antibody test would be an important tool in helping to address current and future outbreaks.

Traders appear to be encouraged by the announcements and are bidding up shares accordingly.

Now what: Wednesday's news is most certainly a welcome win for investors, as the recent news out of OraSure hasn't been universally positive.

In July shares took a dive after the company announced that its co-promotion partnership agreement with pharma giant AbbVie (NYSE:ABBV) would be terminated at the end of the year. That took the markets by surprise as the original deal was expected to run through the end of 2019. In addition, OraSure was set up to earn a total of $75 million in exclusivity payments from AbbVie through the life of the contract, but the early termination should greatly reduce that number.

Sales of the company's rapid HCV test grew by a strong 37% last quarter with AbbVie's help, so it's unclear if that strong growth rate will continue once the partnership ends. OraSure did state that it was free to seek other partnership arrangements, but so far no announcements have been made.

Still, Wednesday's news should help advance the company's Zika virus testing research, and it should be seen as a vote of confidence from the U.S. government on OraSure's capabilities and technology. Plus, a small cash infusion and the prospects of more coming in over time is never a bad thing. For that reason, it's hard to blame the markets for bidding up Wednesday.