Oil giant Apache (NASDAQ:APA) has a long history of paying dividends, with it cutting its investors a check every year since 1965. That said, compared to most of its peers, its payout is relatively minor, and the payout tends to stay flat during times when oil prices are weak. For that reason, the oil company might not give investors a dividend increase next year, or if it does, the boost will not likely be very much.

Until the most recent oil market downturn, the energy sector was an excellent place for income investors. That's because oil companies typically paid pretty generous dividends, with oil giants like Chevron (NYSE:CVX) and ExxonMobil (NYSE:XOM), for example, offering yields well above the general market as measured by the S&P 500: 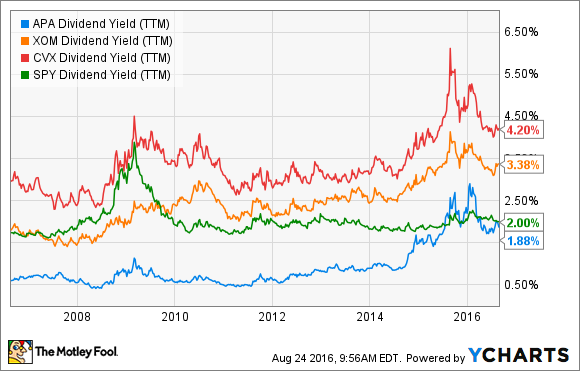 Apache, on the other hand, has never paid out quite as much as its big oil rivals, nor the broader market. Instead, it retained most of its cash flow to fund production growth, buy back stock, and make acquisitions. Unfortunately, it has not been the best allocator of capital, which is why its stock has severely underperformed the market and its big oil rivals: 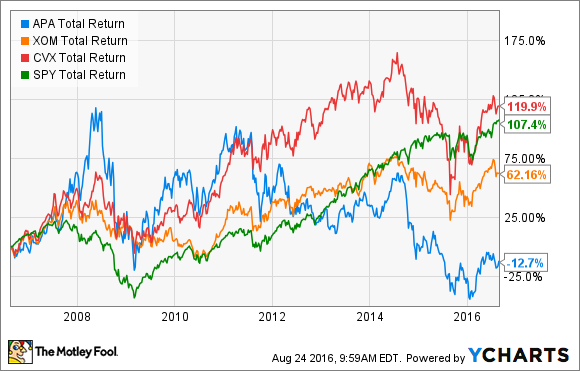 Despite that underperformance, Apache does not appear to be changing its tune on the dividend. In fact, on its second-quarter conference call, the word "dividend" was mentioned just once, when CEO John Christmann said that the company "protected our balance sheet and chose to invest within our cash flows while maintaining our dividend and avoiding equity issuances." While maintaining its dividend is admirable considering the number of energy companies that cut their payouts during the downturn, there was not one mention of any plans to grow the payout.

Instead, Christmann had this to say about the company's go-forward approach:

Our budgeting approach will remain conservative and methodical. We will continue to manage oil and gas price volatility by setting a reasonable expected price band and gearing our capital spending, returns targets, and capital structure to the lower end of that band. Should realized prices come in higher, we will maintain the planning capability and operational flexibility to respond accordingly. This will help to ensure we generate the best possible returns on our drilling programs and maintain our strong financial position through the cycle. In the second half of 2016, our primary goals remain unchanged. We will live within our means, maintain our strong financial position, continue to build high-quality development inventory for the future, and invest to improve long-term returns and create shareholder value.

Given that outlook, it's clear that Apache's top priority for cash flow going forward is not to increase the dividend. Instead, it plans to invest in growing production, which it believes will create the most shareholder value.

That's not to say Apache will not increase its dividend next year. It does have a history of increasing its payout, especially when oil prices are on the rise. However, its dividend increases do not come as consistently nor at as large of a rate as ExxonMobil's or Chevron's: 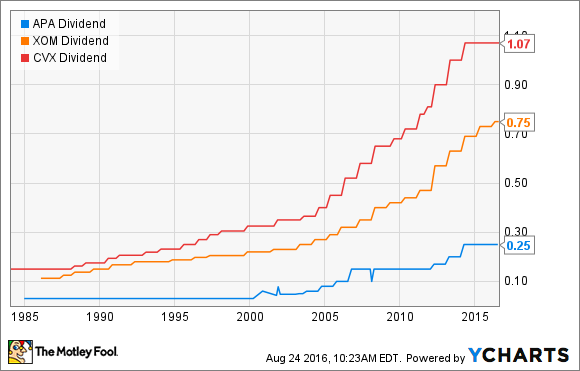 ExxonMobil is the model for dividend consistency, having increased its payout for 34 consecutive years. That puts it in a very select group of Dividend Aristocrats, which are those companies that have increased their dividends for at least 25 straight years. Chevron, meanwhile, had boosted its payout for 30 consecutive years before keeping it flat during the downturn to preserve its balance sheet. Apache, on the other hand, held its payout flat for several years after the financial crisis and, more recently, has not provided its investors with a dividend increase since early 2014.

While it is possible Apache will boost its payout next year, it's unlikely it will give its investors anything more than a token increase. Instead, the company plans to plow most of its excess cash flow into boosting production. While the company believes production growth is the key to driving shareholder returns, its history suggests it has not been the best capital allocator, especially compared to its dividend-growth-focused rivals ExxonMobil and Chevron.