Which of the two excellent specialty REITs should you buy?

America's population is aging, a process that will only intensify in the coming years and decades. The number of senior citizens in this country is expected to almost double -- double -- by 2050. And those folks will require more medical care, and housing facilities designed for their needs. 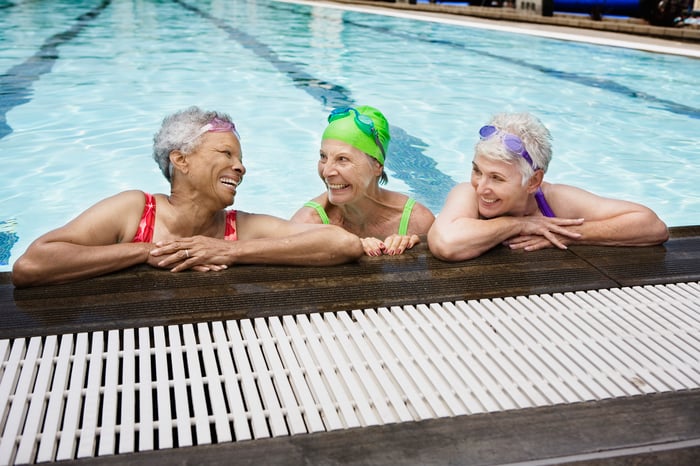 So it's a good time to invest in real estate investment trusts that concentrate on specialty healthcare assets, senior living facilities, or a combination of both. Two of the best REITs with that mix are HCP (PEAK -2.71%) and Ventas (VTR -3.15%).

But which of the pair is the superior investment? Here's what I think.

HCP and Ventas have portfolios that are (or will be) structured roughly the same way. The top overall category is senior housing, with a diverse collection of healthcare assets rounding out the holdings.

Although the two aren't the same size in terms of market capitalization -- with Ventas at a current $26 billion-plus and HCP approaching $19 billion -- the two companies' asset bases nearly match. At the end of their respective most recently reported quarters, these totals stood at $22 billion (Ventas) and $21 billion (HCP). Ventas still had proportionally more buildings, land, and in-progress construction than its rival.

In terms of recent quarterly performance the two REITs are in the same general neighborhood; they both grew normalized funds from operations, HCP by 4%, and Ventas by 7% on a year-over-year basis. At least, that was the case when the results of key assets (HCP's ManorCare and the Ventas unit now known as Care Capital Properties (CCP)) are stripped out of the previous-year numbers for both -- but more on that in a moment.

Historically, both have traded at a similar pattern for the most part, as you can see in the first graph below, and have improved their total returns (i.e., share price appreciation plus dividends) at close to the same rate. 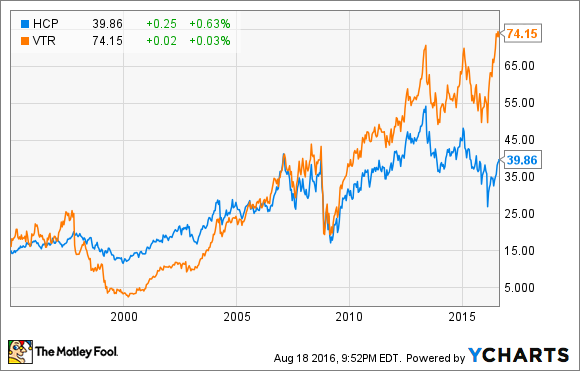 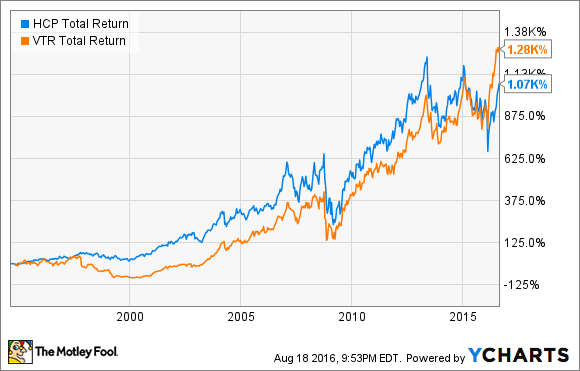 This past February, HCP and Ventas declined, but HCP's drop was a bit steeper. The key reason for this is that HCP posted a rare net quarterly loss due to a writedown it booked for its troubled skilled nursing/assisted living subsidiary, ManorCare.

ManorCare is still in HCP's portfolio; not for much longer, however. The company will spin off the unit into a new REIT called Quality Care Properties, in a process that's slated to wrap up in Q4 of this year. In that respect, Ventas has a leg up on its peer. Last summer it spun off its own skilled nursing division into the now separate, publicly traded Care Capital Properties.

Down, but far from out

HCP's stock price has been lagging that of Ventas' for most of this year. In my opinion, this is due to lingering wariness in the wake of that quarterly loss. To that, we can add uncertainty over the spinoff -- we still don't know all the details about it, notably what part of HCP's current dividend will be "lost" to the new entity.

(For some reference, Ventas and Care Capital Properties effectively paid a combined dividend of $0.87 after the latter was spun off. This represented a nice improvement from the $0.79 Ventas was handing out when the unit was still in its portfolio.).

The fallout of this is that Ventas is outpacing its competitor in terms of both share price and total return since HCP's ugly loss-making quarter was reported.

As a result of that steeper rise in share price, however, there's a big disparity in the dividend yields of the two stocks at the moment. HCP's dividend sits at 5.8% compared to Ventas at 3.9%..

That's the main reason why I prefer HCP. The dividend is rich, and I think concerns about future payouts post-ManorCare are unfounded. I'd bet that, like Ventas, HCP will be generous with the combined dividend allocation. The REIT has to reassure investors, after all, and for those people the distribution is a great part of the stock's appeal.

Once the company rids its portfolio of the laggard ManorCare , its stock should start to close the current gap with its rival. So on the basis of that upside potential, plus the current high dividend yield, HCP is my winner in this contest.