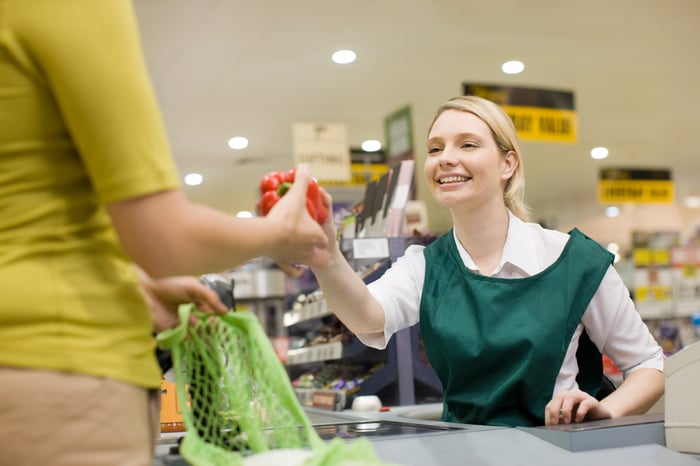 Costco (NASDAQ:COST) not only has tremendous customer loyalty. It also has a reputation for being a good employer.

While retail rivals like Wal-Mart (NYSE:WMT) and Target (NYSE:TGT) have suffered through protests over employee wages, Costco has managed to avoid that negative press. That's because the chain has made an effort to be good to its employees, aggressively keeping its wages ahead of industry averages.

That pays off in multiple ways for the warehouse club. Higher wages can obviously help attract and retain employees while also encouraging better service for customers. Wal-Mart CFO Brett Biggs even noted during his company's most-recent earnings call that happier workers have partly been responsible for sales increases in the chain's United States stores.

We believe a contributing factor to the results is our consistent improvement in customer experience. Customer surveys indicate that we're making good progress in providing a better shopping experience with cleaner stores, faster checkout and friendlier service.

Higher-paid workers are happier workers, and while this simple idea perpetually eludes some retailers, Costco has long understood it.

Costco has a reputation for being a good employer. Image source: author.

Costco has been a wage leader

While Wal-Mart and Target deserve credit for their recent large-scale wage increases, Costco has always been a leader when it comes to hourly salaries. The company continued to protect that turf in the first three quarters of its fiscal 2016 by raising hourly rates at both the top and the bottom of its wage scale. CEO Richard Galanti discussed this during the company's third-quarter earnings call.

As I mentioned, our last quarter's -- second quarter's earnings conference call back in March, in addition to the...top of scale increase each year...this year, we also increased our bottom of scale hourly rates in U.S. and Canada, which is about 80% of our company. Effective this past March 14, we increased our starting wage at $1.50 an hour to $13 and $13.50 an hour.

Making a change like that does not come cheaply, and Galanti explained the cost during the call.

The new bottom of scale wage increase results in a year-over-year incremental payroll expense of about $6 million, or $0.01 a share in the quarter. We estimate that this will be anywhere from $0.01 to $0.02 a quarter in each of the next three quarters depending on which way it rounds.

Paying workers a little more than your rivals keeps those employees from leaving. That lessens training costs, improves morale, and creates a better overall environment. Satisfied workers directly translate into better sales, as they do a better job taking care of customers. And employees who are in it for the the long haul -- rather than those who are biding their time until they find a better job -- take more pride in their work.

In the grand scheme of things, the difference between being a wage leader and skimping on wages is a relatively small number for Costco. By choosing to pay that price long before employees become unhappy with their wages, the company has made a smart move that should continue to pay off for years to come.