Nucor is a leading domestic steel maker, and part of its industry edge shows up on the balance sheet.

Nucor (NUE 3.32%) lost money along with most of its steelmaking peers in 2009. But since that time, Nucor stands alone in its ability to remain profitable. United States Steel (X 1.96%), AK Steel (AKS), ArcelorMittal (MT 1.65%), and even Steel Dynamics (STLD 4.20%) have each dipped into the red at least once since the end of the deep 2007 to 2009 recession. There are a host of reasons for Nucor's standout performance, but one key point of difference can be found on the balance sheet.

The first thing to note about the American steel industry is that it's been in a downturn since the end of the 2007 to 2009 recession. Global overcapacity and a flood of cheap imports have resulted in falling prices. It hasn't been pretty, with AK Steel among the worst performers, losing money for seven consecutive years. The last time the company turned a profit for shareholders was in 2008. 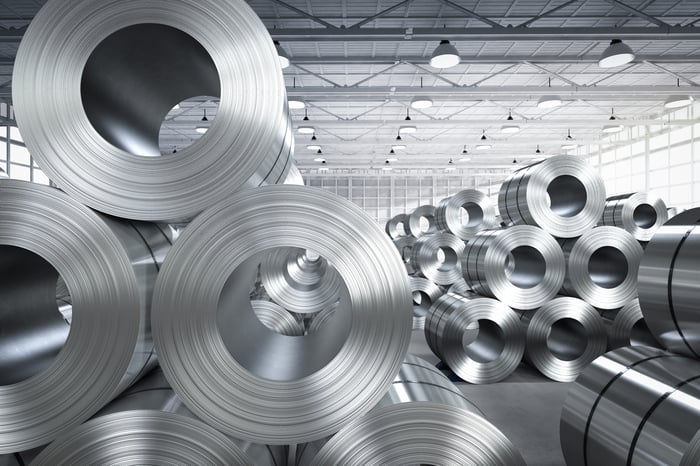 But AK Steel shareholders aren't alone in their misery. U.S. Steel has lost money in six of the last seven years. ArcelorMittal has lost money for four straight years. And Steel Dynamics, which has numerous operational similarities to Nucor, lost money in 2015 after managing to turn annual profits between 2010 and 2014. Only Nucor has remained in the black since posting a loss in 2009.

Each of these companies has been working hard to deal with the difficult steel industry. Some of the tactics have included cutting costs and shutting operations. But there's clearly something about Nucor that's different. The truth is that there are a number of reasons why Nucor has stood out in its profitability, such as a highly flexible pay plan. However, one key issue investors should note is the company's conservative balance sheet.

Simply put, Nucor isn't as indebted as most of its peers. That's not an absolute issue, since each of the companies aren't the same size. It's a relative thing.

A quick look at the table above will show that Nucor is at the low end of the industry when it comes to long-term debt. But it isn't the least encumbered; that distinction goes to ArcelorMittal. There is a big difference, though, between debt as a percentage of the total capital and the financial impact that debt has on the income statement. When it comes to interest expense as a percentage of sales, Nucor really sets itself apart.

That may not sound like a huge difference on paper, but consider this. If Nucor's interest expense as a percentage of sales was at its peer average of 2.4%, it would have had to pay around $60 million more to its lenders in the second quarter, that's roughly $0.15 a share that you could just lop off of Nucor's $0.73 earnings per share figure in the quarter.

Looking at debt from this angle changes things a great deal. While Nucor's long-term debt isn't the lowest among its steel major peers, it's the least onerous. You can also start to see the value of Nucor's conservative balance sheet and why it sets Nucor apart from its rivals. In fact, profit margins in the steel industry are in the low single digits, even in good times, so a single percentage point on the interest expense front is really quite large. The fact that debt and interest costs just aren't as big a nut to crack for Nucor is real competitive advantage over its peers.

Nucor's balance sheet provides the company with the flexibility to deal with a difficult market that steel companies like US Steel and AK Steel lack. And the relatively low cost of the debt in relation to sales means that the impact isn't as great on the income statement, where even relatively low-debt companies like ArcelorMittal take a bigger hit.

While long-term debt isn't the only point of difference that lifts Nucor above its peers, it's one you should take the time to examine. It's made a big difference through the deep downturn that the industry has faced since the end of the 2007 to 2009 recession, and it should be equally as helpful when the industry heads higher again.