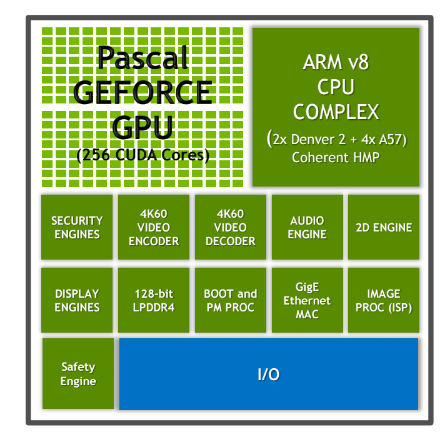 Not long ago, reports surfaced that Nintendo (OTC:NTDOY) had chosen to use an NVIDIA (NASDAQ:NVDA) Tegra processor for its next-generation NX video game console. The initial report, courtesy of Eurogamer, said that software development kits for the NX were powered by the NVIDIA Tegra X1 -- a high-performance mobile processor announced back in early 2015.

Shortly after these reports hit the web, I argued that the final Nintendo NX -- if it is indeed powered by an NVIDIA Tegra processor -- will not feature the Tegra X1. Instead, I expect the NX to be powered by a next-generation Tegra processor codenamed "Parker".

Now, according to a new report from SegmentNext that cites "sources close to the project", the NX will indeed use an NVIDIA Parker chip (which has yet to receive formal branding) rather than the older X1.

At the recent Hot Chips conference, NVIDIA gave a presentation detailing the Parker chip. The following slide shows some of the major improvements over the X1: 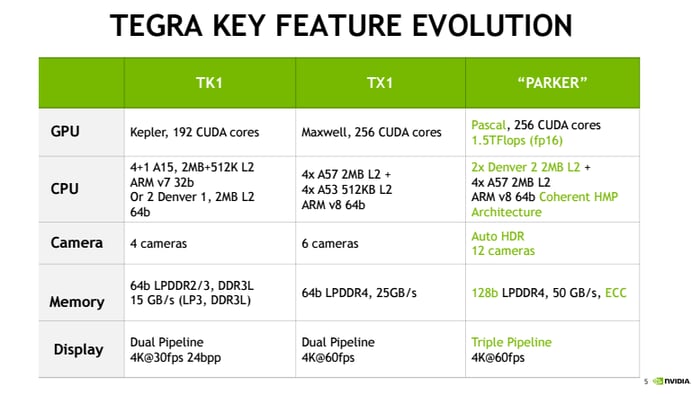 The key improvements relevant to a gaming console such as the NX are in graphics, CPU, and memory.

The graphics processor is upgraded from 256 CUDA cores based on the company's Maxwell architecture to 256 CUDA cores based on the company's newer Pascal architecture. In the slide, NVIDIA claims 1.5 teraflops of half-precision (FP16) floating-point performance -- up 50% from the Tegra X1 chip. This increase should be helpful for games, which are highly dependent on graphics-subsystem performance.

To that end, NVIDIA has apparently beefed up the main processor quite a bit, moving from a quad ARM Cortex A57 + quad Cortex A53 (in a configuration similar to ARM's big.LITTLE, which combines a set of low-power cores to handle lightweight tasks and a set of high-performance cores for more demanding tasks), to a quad Cortex A57 + dual NVIDIA-designed second-generation Project Denver processor core setup (NVIDIA calls this "big + super").

NVIDIA has not disclosed the speeds at which the A57 and second-generation Denver cores run, but with the move from Taiwan Semiconductor Manufacturing Company's 20-nanometer technology to its 16-nanometer manufacturing tech, speeds on the comparable A57 cores should move up significantly.

A large step for Nintendo

From these specifications, it would appear that the Nintendo NX will see significant performance gains relative to the current-generation Wii U. This should ultimately allow for games that are much more visually compelling than what can be achieved at the moment.

Typically, though, Nintendo doesn't try to compete on hardware specifications or raw performance -- Nintendo will likely lag behind in this area relative to competing console offerings. It'll take a lot more than just improved hardware for Nintendo's game console business to recover from the disappointing Wii U generation.