Warehouse club Costco (NASDAQ:COST) is known for saving its customers money and producing steady revenue and earnings growth for investors, but a dividend stock it is not. Costco yields barely above 1% -- a meager payout dwarfed by most of its dividend-paying peers.

Costco stock has been on the rise for the past five years, more than doubling in that time and pushing the valuation up to optimistic levels. When a stock trades for 30 times earnings, dividend investors should probably look elsewhere. 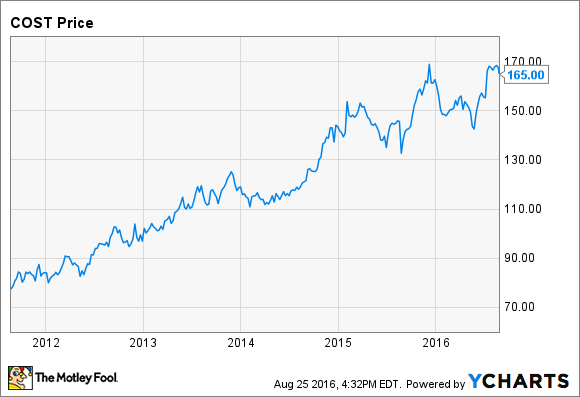 Thankfully, there are plenty of alternatives to Costco for dividend investors. Here are four retail stocks that fit the bill.

Wal-Mart (NYSE:WMT) doesn't get the same respect as Costco, with the stock trading for a little less than 17 times expected earnings for this year. As a traditional retailer, Wal-Mart is more susceptible to the rise of online retail, while Costco's warehouse-club model gives the company some protection. Wal-Mart stock currently yields about 2.75%, with dividend payments eating up about 47% of expected earnings.

Wal-Mart is in the middle of a period of heavy investment. The company recently raised wages and increased training in its stores, initiatives that have already helped improve store traffic in the U.S. E-commerce is also getting a renewed focus, with the $3.3 billion acquisition of Jet, and investments in initiatives like online grocery ordering, which are aimed at making Wal-Mart a force in the world of online retail. Dividend growth will likely be slow for a while, as these investments will take time to pay off, but it won't take much growth for Wal-Mart to beat out Costco in the eyes of dividend investors.

A few years ago, Best Buy (NYSE:BBY) looked like it might be the next Circuit City. But under new leadership, the company has rebounded, slashing unnecessary costs and investing heavily in e-commerce. The company's latest quarter showed that the strategy is working: Adjusted EPS jumped 16% year over year, while online sales soared nearly 24%.

Best Buy stock currently yields about 2.85%, although a special dividend in each of the past two years has pushed up the true yield well above 4%. That special dividend may not continue, but even without it, Best Buy still offers an attractive payout.

The company is operating in a difficult environment, with industry-wide consumer-electronics sales suffering from a lack of new, exciting products. But Best Buy has managed to execute well despite these headwinds, and any claim that the company isn't long for this world isn't giving the company enough credit.

Department store Kohl's (NYSE:KSS) isn't producing consistent growth like Costco.  Instead, it's struggling to get customers in the door, like most other department stores. But too much pessimism has knocked shares of Kohl's down, pushing the dividend yield up to about 4.45%. The yield was even higher prior to Kohl's second-quarter report, which was better than expected and caused the stock to rise. At the lowest point for the stock earlier this year, the dividend yield surpassed 5.5%.

Kohl's faces the challenge of becoming an omni-channel retailer that's able to compete with online giants like Amazon. It's far from that point at the moment, and there's some chance that the company will fail, fading away like forgotten retailers of the past. But the odds of that, I think, are low.

Compared to other department stores, Kohl's has the advantage of operating its stores mostly outside of malls, avoiding the problem of weak mall traffic that's hurting many mall-based retailers. The next few years will be bumpy for Kohl's, but a fat dividend gives investors a reason to stick around.

A bright spot in retail

Home improvement store The Home Depot (NYSE:HD) has been killing it lately. During the company's second quarter, comparable sales rose an impressive 4.7%, driving a double-digit increase in earnings. The company expects this solid performance to continue, anticipating a 4.9% rise in comparable sales for the full year, complemented by a 15.6% jump in earnings per share.

Home Depot isn't a particularly inexpensive stock, trading for around 21 times the company's guidance for full-year earnings. But that's still quite a bit cheaper than Costco, and the stock's 2.05% dividend yield is twice as high.

A good portion of Home Depot's business is also protected, at least to a degree, from online retailers. With earnings growing at a double-digit pace, dividends are likely to follow suit, making Home Depot an attractive dividend growth stock.