According to the latest available SEC filings, five different billionaire-run hedge funds unloaded nearly 1.2 million shares of healthcare REIT HCP (NYSE:PEAK) during the second quarter. And while I never encourage investors to blindly follow the actions of billionaires, it does compel me to re-examine my original investing thesis.

HCP has had an interesting 2016 so far. After posting a surprising loss in the fourth quarter of 2015 caused by its troubled HCR ManorCare portfolio, the stock plummeted to a multiyear low. Since then, HCP has produced two solid quarters, and has announced a spinoff of the troubled assets into a newly created REIT (which will be known as QCP) in order to maximize the potential of both the remaining portfolio and the spun-off assets. 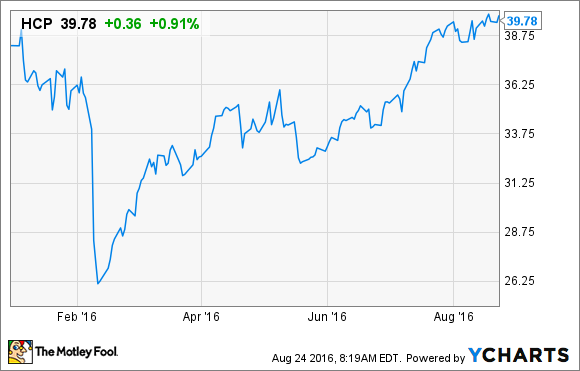 It would be silly to speculate on the reasons that the aforementioned hedge funds unloaded their HCP shares, but here are some reasons investors might want to sell, as well as some reasons HCP still looks attractive.

There are several potential reasons investors might want to sell a given stock, but here are two big ones that apply to HCP right now.

In short, the combination of a big short-term profit and the possibility of growing pains ahead as the companies discover their independent identities is certainly a valid reason to sell, especially if your top priority is a consistent stream of income from your investments.

Even after the gains of the past six months, there are a few reasons investors may want to consider HCP for their long-term portfolio.

Obviously, HCP isn't as compelling of a bargain as it was in February. And, the pending spinoff certainly does create some uncertainty going forward, both in terms of dividends and growth potential.

However, I believe that the spinoff is the right move for HCP, and will allow the company to continue its history of producing excellent income and total returns for shareholders. And, the company's low valuation helps to make up for any uncertainty. In the interest of full disclosure, HCP is a cornerstone of my own retirement portfolio, and I have no plans to change that. At just 13.9 times 2016's expected FFO, it's still looking like a good time to add HCP to your portfolio, despite what some hedge funds have done.