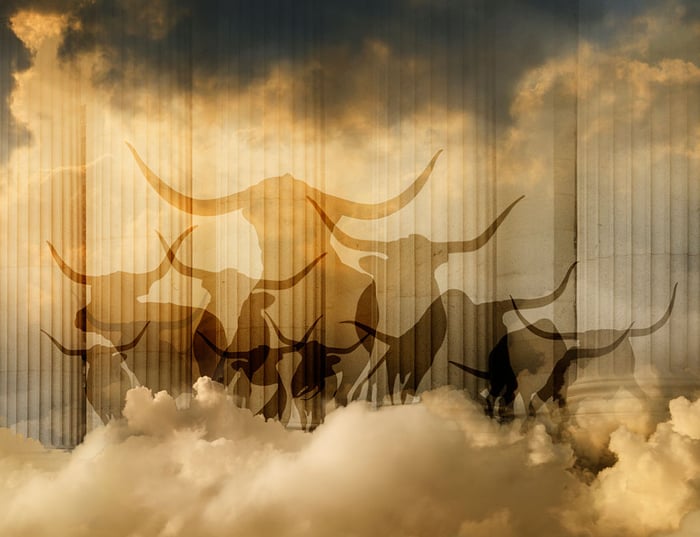 It's game-on time for Pfizer (NYSE:PFE) -- finally. On Monday, the giant pharma surprised the market by speeding past Sanofi (NASDAQ:SNY) to nab cancer biotech Medivation Inc. (NASDAQ:MDVN) for $14 billion in cash.

But is this buyout good news for Pfizer's investors, with Pfizer's recent history of buyouts dominated by two big setbacks? The U.S. drugmaker walked away from a $160 billion merger with Allergan when new U.S. Treasury rules blocked the deal's benefits. And that came just two years after Pfizer flopped in a $118 billion bid to buy AstraZeneca. After two failed attempts at megamergers, shareholders would be justified in asking whether the giant pharma has a clue what it's doing anymore when it comes to acquisitions.

Despite the high price of the Medivation deal, I think Pfizer does know what it's doing here. Let's look closer at what the company got with this deal and how it could pay off for investors.

Pfizer leapfrogs ahead in oncology

Pfizer's biggest growth driver has rapidly become breast cancer drug Ibrance. With the Medivation acquisition, Pfizer will now be in the enviable position of owning two of the top 8 best-selling oncology drugs on the market, as determined by projected 2021 sales. Check out the visuals below to see how well Pfizer has now positioned itself in oncology. 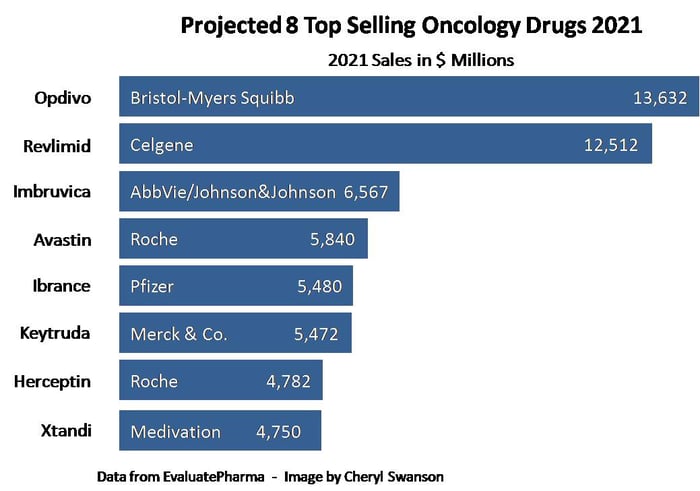 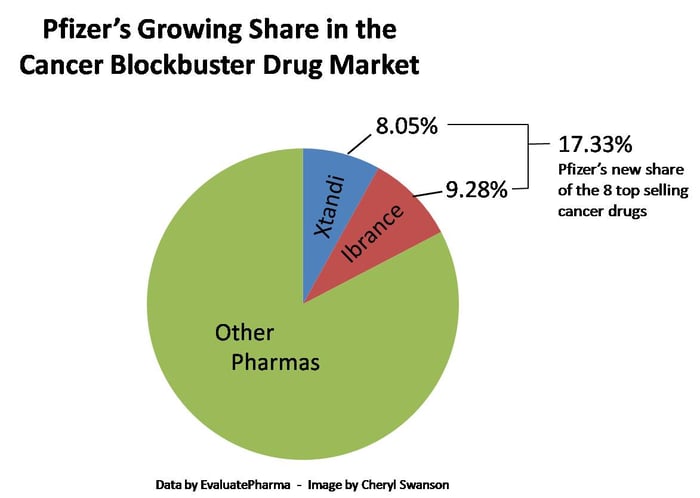 As the pie graph shows, Pfizer will own over 17% of the top-selling cancer drugs after the Medivation deal closes. And Pfizer's slice of this very high-margin pie may end up even bigger, because Xtandi could easily blow through sales estimates of $4.75 billion.

Over 64,000 men took Xtandi in the U.S. last year, and the drug achieved close to $2.2 billion in global sales. U.S. sales were at $330 million last quarter, representing a revenue increase of around 11% compared to the same quarter last year. The drug's volume increased even more, with net sales growth at 18%.

The continued ramp-up on this drug could be explosive. Xtandi has an October 22 PDUFA date for a potential label expansion in prostate cancer, and top-line results for its phase 2 ER/PR-positive breast cancer trial are due before the end of the year. Further down the road, Xtandi has a very broad clinical development program, with 11 phase 1 to phase 3 clinical trials in progress. Medivation's management has said they see an eventual $18.5 billion peak market opportunity for Xtandi, but that's a huge stretch. Still, some analysts see $7 billion in peak sales for the drug in the pre-metastatic prostate cancer market alone.

What about the pipeline?

Interestingly, Pfizer is likely trying to make up for some past mistakes here. Talazoparib is a PARP inhibitor, a type of drug that interferes with the repair of defective DNA. Pfizer sold a rival PARP inhibitor, rucaparib, to Clovis Oncology (NASDAQ:CLVS) back in 2011. In fact, the small biotech's stock leapt skyward earlier this week, jumping 30% before being briefly halted for volatility, when news broke that FDA had agreed to evaluate rucaparib for approval.  The big pharma has got to be kicking itself now, because it sold the drug to Clovis for a measly $7 million. But at least Pfizer retained some rights and will receive a royalty in the mid-teens if rucaparib reaches the market.

PARP inhibitors haven't received much attention compared to other new drug classes, but Tesaro recently announced promising data for its PARP inhibitor inovarian cancer, which increased the perceived value of drugs in this class.

Meanwhile, Medivation's other pipeline drug is in one of the most exciting areas of oncology: immunotherapy. In that arena, Pfizer is trying to catch up with leaders Merck and Bristol-Myers Squibb. While pidilizumab is in early stage development, it at least gives Pfizer a foot in the door in a very important new category of cancer drugs.

Pfizer's $81.50-per-share offer was a 55% premium to Sanofi's initial offer to buy Medivation for $52.50 in April. It's certainly possible that Pfizer paid too much, especially since it will split U.S. profits on Xtandi with Japan-based Astellas Pharma, which helps market the drug. Astellas gets an even steeper cut on ex-U.S. sales. But, Pfizer defended the deal, saying it would add $0.05 to its earnings per share in the first full year.

Bottom line, I think the question is moot. Pfizer had to overpay, or else it would lose Medivation to another pharma. Reuters reported that Merck, Celgene, and Gilead Sciences had all submitted expressions of interest to buy Medivation. Under those conditions, Medivation was not going to come cheap, or easy. Drugmakers have found they have to pay top dollar for novel cancer drugs that are more effective than standard older treatments, or else watch some other company snap them up.

Read told analysts that the Medivation deal was mainly driven by a belief in the future potential of Xtandi. "The product is just at the beginning of its growth cycle," he said, pointing out that Xtandi is typically prescribed by oncologists. Assuming the drug is approved for earlier use in prostate cancer, it would also be prescribed by urologists. If Read is right that Medivation is just getting started, the steep premium to scoop it up now will end up looking wise.

Beefing up branded drugs for a possible split

Pfizer's management has previously said it may split up the company by the end of the year, but it knows it needs to beef up its branded drug segment before the split.

Pfizer is making a big push into oncology for several reasons. Discoveries in immunology and genetics are allowing for the development of much more effective drugs, many of which sell for well over $100,000 a year. The meds have also proven resistant to cost-cutting measures. Since cancer can be a rapidly fatal disease, and patients have few options, payers usually cough up.

Pfizer has not been wildly successful with its cancer efforts until recently. But it now has a big hit with Ibrance, and the buyout of Medivation netted it another hit with Xtandi.

Investors appear to like the giant pharma's recent deals, which include the buyout of Anacor Pharmaceuticals. Pfizer's stock is up 8% from the beginning of the year, which outpaces all the major U.S. trading indexes. The move up may continue, as before the ink was dry on the Medivation deal, Pfizer announced it had acquired part of AstraZeneca's antibiotics business for approximately $1.6 billion. The latest deal involves three approved meds and two more in clinical trials.

All of which leads to a very interesting question: What will Pfizer buy next?

Game On for Pfizer With $14 Billion Medivation Buyout (or, Why Pfizer's Buyout of Medivation Could Be a Smart Move) @themotleyfool #stocks $PFE $MDVN $SNY $CLVS Next Article
Current