GW Pharmaceuticals trounced its biopharma peers this year. Is it still a buy?

Unlike most biopharma stocks, GW Pharmaceuticals (GWPH), a British company developing marijuana-based medicines, has turned in a stellar 2016. Specifically, the company's shares are now up by nearly 20% year to date and have simply crushed the performance of the iShares Nasdaq Biotechnology ETF: 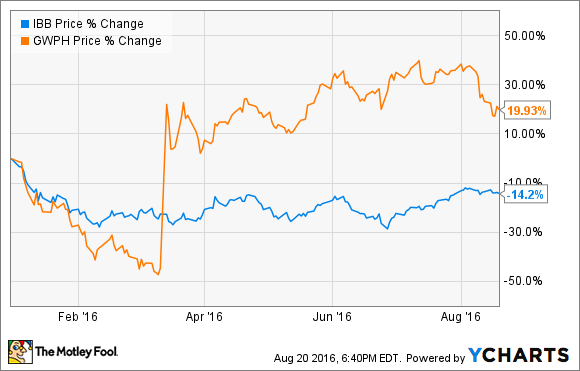 GW's unusual strength during this turbulent period for biopharma stems from its top clinical asset, Epidiolex, hitting the mark in two late-stage studies for the rare forms of childhood epilepsy known as Lennox-Gastaut syndrome (LGS) and Dravet syndrome.

Given the stock's ability to swim against the stream, so to speak, we asked two of our regular healthcare contributors if investors should continue to buy this top performer, or simply watch GW from the safety of the sidelines. Here's what they had to say.

That may not seem like a huge win, but it's enough to improve these patients' overall well-being by a mile. The majority of Dravet patients tested suffered from 13 or more seizures per month during the pre-dosing period, and had tried four or more antiepileptics without success. In the Lennox-Gastaut trial, most patients suffered 74 or more monthly seizures during the pre-dosing observation despite using an average of three antiepileptics after failing to respond to an average of six drugs.

Epidiolex is an oral formulation of cannabidiol, which is purified from natural marijuana. One of the biggest fears surrounding its commercial viability is a chance that certain strains of marijuana in its natural state might be equally effective at reducing these patients' seizures at a fraction of the cost. Luckily for GW Pharma, the U.S. Drug Enforcement Agency (DEA) recently reiterated its stance on marijuana's Schedule 1 status. The status makes researching whether any strain of natural marijuana is an effective epilepsy treatment (or a treatment for anything at all, for that matter) practically impossible. Since the DEA's reiteration was effectively based on a lack of available research, the status quo will probably remain for quite some time.

GW's valuation is simply too rich

George Budwell: I readily concede that Epidiolex appears headed for continued success in the clinic, and should eventually gain regulatory approvals for both LGS and Dravet syndrome as a result. After all, the drug produced a highly significant reduction in seizure rate compared to placebo for LGS (p = 0.0135), and significantly reduced the rate of convulsive seizures relative to placebo in Dravet syndrome (p = 0.01).

Despite Epidiolex's promise, GW appears to be overvalued at the moment. The first issue to understand is that GW's multiple sclerosis treatment, Sativex, has so far been a non-factor from a valuation standpoint. In fact, the company hasn't even bothered to waste much ink on the progress of the drug's commercialization overseas in its recent quarterly filings, and instead has chosen to refocus the investing community's attention primarily on Epidiolex's broad clinical program. The point is that GW's current valuation is likely based almost exclusively on Epidiolex's commercial potential, and that's where this story runs into problems.

Digging into the details, GW's present market cap is roughly $1.83 billion. Now, some estimates suggest that Epidiolex could generate around $800 million in peak sales for these first two indications. And if true, GW's present valuation wouldn't be particularly hard to swallow. But this sales forecast is highly optimistic, to put it mildly.

As an orphan drug, Epidiolex would certainly garner a premium pricing point. However, it won't grab prices near the astronomical figures for orphan cancer drugs or enzyme replacement therapies -- yet that's exactly what this estimate of $800 million -- or worse still, the $3 billion sales figures being floated by some uber-bullish firms -- is implying.

Specifically, the bull models are forecasting Epidiolex's wholesale price for a year's supply to come in at an astounding $45,000 USD, on average, and they're also assuming significant off-label use for the drug..

A more realistic figure -- especially in this new era of heavy scrutiny from pharmacy benefit managers -- is a wholesale price perhaps a little more than double the average cost for branded epilepsy medications, meaning somewhere around $24,000 per year.

There's also no good reason to assume that doctors are going to prescribe a more expensive drug off-label for common types of epilepsy. Payers, after all, will no doubt balk at covering Epidiolex off-label due to its premium pricing structure, and not many patients will be able to pay out of pocket.

That's why the "bearish" peak sales figure of around $300 million is probably closer to the mark. As such, GW's shares are probably trading at around six times Epidiolex's likely peak sales at this stage, suggesting that this high-flying biopharma could fall back to Earth soon.