Although the 3D printing industry offers attractive growth potential, Stratasys' (NASDAQ:SSYS) performance has failed to impress investors over the last six quarters. Since the start of 2015, Stratasys has been hit with a notable slowdown in customer spending, and the stock reacted in kind: 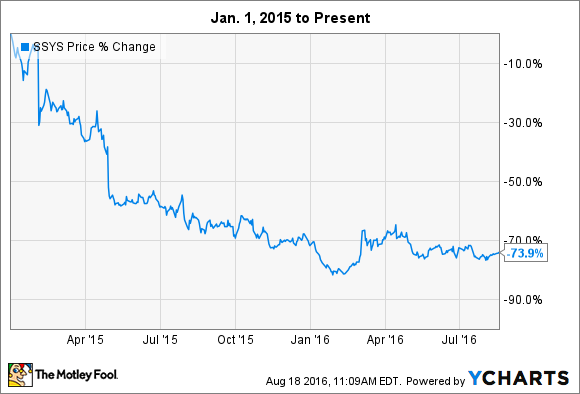 When a stock loses a significant amount of its value, it often indicates that the company faces serious underlying challenges. Stratasys is no different. The company currently faces three major challenges that could undermine its turnaround efforts.

Due to the slowdown in customer spending, Stratasys has seen six straight quarters where its printer sales have fallen on a unit and revenue basis. Management's prevailing theory is that customers have too much 3D printer capacity on hand and are opting to utilize their existing printers instead of purchasing new ones. 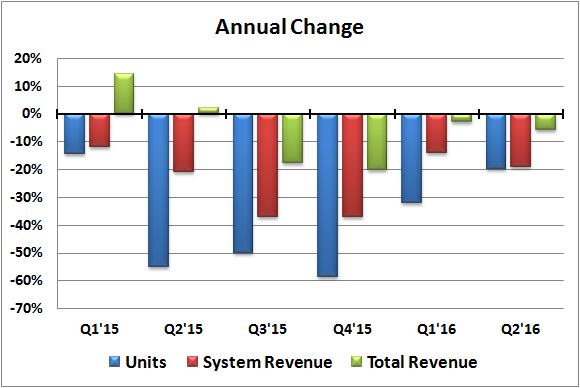 Although the fall in 3D printer sales has had less of an impact on Stratasys' overall revenue over the last two quarters, slowing printer sales threaten the long-term potential of its razor-and-blades model. After all, printer sales fuel the repeated sale of materials, which are consumed over a printer's lifetime and typically carry a higher margin. With falling printer sales, the potential of this future revenue stream likely weakens.

Between the recent entrance of Carbon and the upcoming entrance of HP, Stratasys faces more competition than ever. Carbon's M1 printer is anywhere from 25 to 100 times faster than technologies before it, while HP's upcoming Multi Jet Fusion printers claims to be 10 times faster than leading extrusion and selective laser sintering-based printers. Overall, these new entrants threaten Stratasys' competitive positioning, which could make it more difficult for the company to stand out.

While it's too early to say conclusively, Stratasys' management claims that it hasn't been subjected to competitive pressures. However, the risk is if the market validates HP and Carbon with strong sales and Stratasys is slow to respond, it could come at the expense of the company's market share.

In recent years, Stratasys' execution has been a far cry from stellar. The company failed to realize the growth potential of previously made acquisitions, including its MakerBot unit, which suffered from ongoing performance and quality issues. Ultimately, these mishaps forced the company to write off a significant value of assets tied to acquisitions. Since the start of 2015, Stratasys goodwill and intangible assets have fallen over 68%: 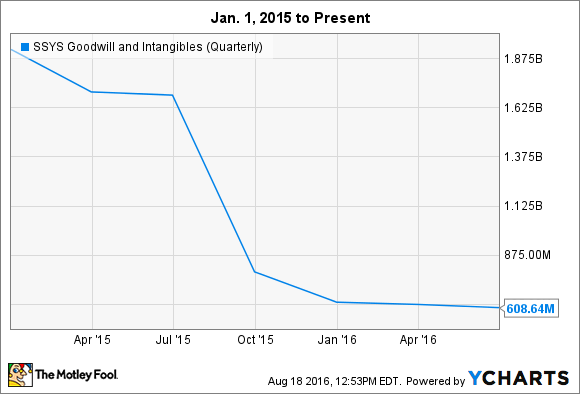 Last month, Ilan Levin assumed the role of CEO and hopes to improve the company's execution, efficiency, profitability, and overall strategy. Levin has been with the company in an executive role from 2000 to 2012. However, Levin's leadership style, approach, and ability to stage turnarounds, are largely unknown to the market. The risk is that Stratasys chose a leader that's too similar to his predecessor, David Reis, whose actions as CEO led to execution issues it faces today.

Before investing in a stock, it's important to understand the risks and challenges a business faces as it works to realize its full potential. For Stratasys, a large part of its future success hinges on management's ability to navigate the challenges it currently faces. In other words, without solid execution on management's part, the company's other challenges may become more pronounced.