Investors are buying high-yield stocks all wrong. Like a siren's song, we get lured in by the income potential of a stock -- only to find that the expected lucrative dividend could not even make it through the first bump in the road. More often than not, the income stream dries up, and our investment is toast.

There is a better way to buy a generous income stream, which is best summed up in the following quote by Wealthifi:

The thing is, if you're just oogling fat current dividend yields you are missing the more profitable boat. When it comes to dividend investing, the far smarter play is to zero in on companies that consistently increase their dividend payouts.

I found that to be true in my own investing experience, with my highest-yielding investments being those that didn't pay eye-popping yields initially. However, because these companies grew their payouts over the years, I am now enjoying an enormous amount of income in relation to my initial investment. Three investments stand out as great examples of how I found double-digit yields in the unlikeliest of places.

Riding the growth of this high-yield pipeline

While I will admit that I did initially invest in midstream MLP Enterprise Products Partners (NYSE:EPD) because of its high yield, it has vastly exceeded my wildest expectations. When I made my first purchase in August of 2007, it was paying a very generous 6.95% yield. However, thanks to smart management and the boom in energy infrastructure, the company increased its payout every quarter since my initial investment. In fact, Enterprise Products Partners recently made its 48th consecutive quarterly increase -- the 57th increase since it went public.

Because of all those distribution increases, the yield on my initial investment in Enterprise Products Partners is an incredible 11.5%. That is about double its current yield of 5.86%, which has fallen because the company's unit price appreciated in value. In fact, my initial investment is up a whopping 90%. All I did was invest in a company that had a history of increasing its payout and hold on tight through the years. Furthermore, with $5.6 billion of growth capital projects under construction, Enterprise has the clear visibility to continue growing its payout for the next few years.

Spinning off a lot of cash flow

I never actually bought one share of refiner Phillips 66 (NYSE:PSX). Instead, I was given shares in April of 2012 when oil giant ConocoPhillips (NYSE:COP) spun off its refining arm to focus on oil and gas production. Instead of selling my newly minted shares, I held on because I was going to collect a pretty decent 3.1% yield based on my initial investment in ConocoPhillips.

That was a very smart decision in hindsight because Phillips 66 went on to increase its payout six times, resulting in a 33% compound annual dividend growth rate. Because of that, I am now collecting a very generous 9.7% yield on my initial investment. That yield will likely continue going higher, given Phillips 66's commitment to "maintaining a growing, affordable and competitive dividend," with that growth supported by the midstream and chemicals projects it currently has under construction.

When I initially bought shares of Chinese internet gaming company NetEase (NASDAQ:NTES) in 2007, a dividend was not even on the radar because it did not pay one. Instead, I was seeking to cash in on the growing Chinese economy, especially its boom in e-commerce and internet gaming. I got all that and more.

Thanks to its surging cash flow, NetEase started returning cash to investors in 2013 via an annual dividend, before switching to a quarterly payout in 2014. Since that time, both the dividend and the stock price have kept going higher: 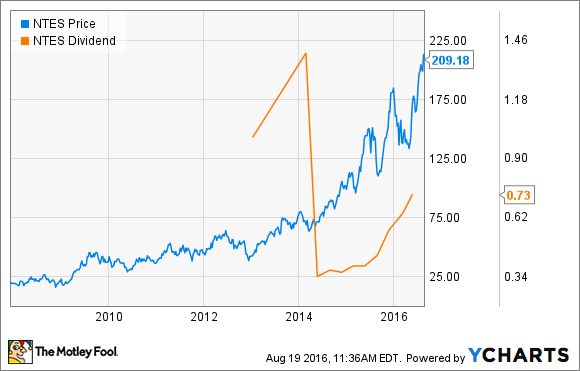 Because I made my initial investment in NetEase well below the current stock price, the yield on that first purchase is a monster 15.6%. That is light years ahead of its current yield, which at 1.1% would not even catch the attention of income investors.

The secret to buying high-yield stocks is to stop focusing on the current yield and instead concentrate on the dividend growth potential. Look for companies that either have a history of dividend growth or have the ability to pay a growing dividend in the future. Once you find these dividend dynamos, the key is to hold on and allow them to grow into high-yield stocks over the long term.