Dividend yield is the measure of a company's dividend returns relative to the company's share price. When you hear the term "high yield dividend stocks," you may think of a stock with a dividend yield around 5%-7%. But looking at the highest yielding stocks out there, means companies with yields in the teens, twenties, and even as high as 70%! If that kind of return sounds too good to be true, that's because it is. Here's a list of the top 10 highest yielding dividend stocks that are traded on the major U.S. exchanges. After one look at the list, you'll see why they are so high, and why it may be best to avoid these stocks.

If you look at all of the companies on this list, there are two common themes: Energy and Investment Funds. That isn't exactly by mistake. On the energy side of things, the past two years have been brutal for oil and gas prices, and that has dragged down just about every company in the industry. The ones that took the biggest hits were companies structured as master limited partnerships or shipping companies that deal exclusively in oil or gas that had high debt loads and diminishing revenue streams.

It should also be noted that most of the investment funds on this list here do not pay consistent dividends. Rather, they do either an annual or semi-annual payouts that will vary based on the fund's performance that year.

The two exceptions left on the list that don't fit these two descriptions are TerraForm Global and Fibra Celulose. TerraForm Global is a subsidiary known as a yieldco to the now bankrupt SunEdison. The yieldco was created to own and operate renewable energy assets like solar and wind farms that were developed by SunEdison and then sold to the yieldco that would pay a dividend from the steady cash flow from these completed projects. The problem with it now is that it doesn't have support from its parent company. Fibra Celulose is a Brazilian pulp and paper company that pays out a varying dividend rate.

These aren't the dividend stocks you are looking for...

A big temptation for investors is to look at these kinds of dividend yields and get carried away with the idea of reaping huge rewards over a short term. After all, if a company is paying a dividend with a yield of 20% or more, it doesn't take long to generate a market beating return, right?

The problem with this idea, though, is that these stocks have such high dividend yields for a reason. More or less, the market is pricing in a lot of pessimism and a high probability that its dividend will get cut. Over the past 14 months alone, every one of these stocks has seen a share price decline of 20% or more. 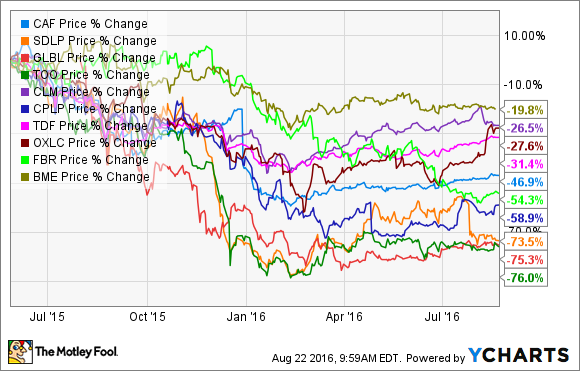 If you look at the prospects for the companies on this list, it isn't hard to see these dividends getting cut or being lower in the future. For the energy related companies on this list -- Frontline, Teekay Offshore Partners, and Capital Product Partners -- the three are up against large bills for equipment under construction that will need to be paid, but demand for all three's services are drying up fast because of either too much available equipment or not enough demand from oil and gas producers. They will likely need to raise capital by issuing shares, but to do so they will need to cut dividends because today that yield is prohibitively expensive. The same can be said for Fibra Celulose, actually. Although it isn't a MLP, the company is spending a lot of money on new pulp facilities. With those projects taking up cash flow, there will be less to pay out to shareholders.

As for the investment funds on this list, all of them have varying payouts that don't have reputations for producing consistent results over the past 10 years. So if you are looking for any form of security that comes from an income investment, these funds won't give it to you. 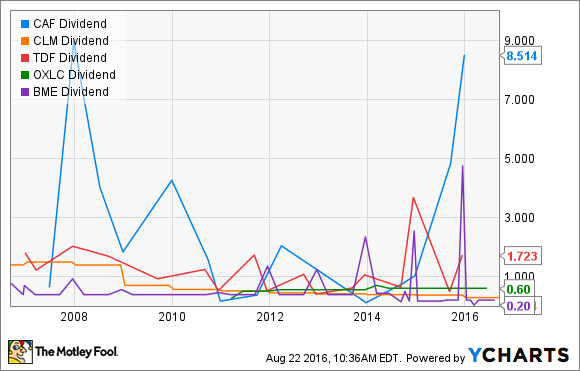 Investing in dividend stocks can be a very powerful tool to build wealth over time, but buying stocks that have extremely high yields can result in poor performance over time because, in reality, dividend yields as high as these 10 companies simply aren't sustainable over time. If you are considering any of these stocks, you should really think twice because they are likely headed for a dividend cut soon.