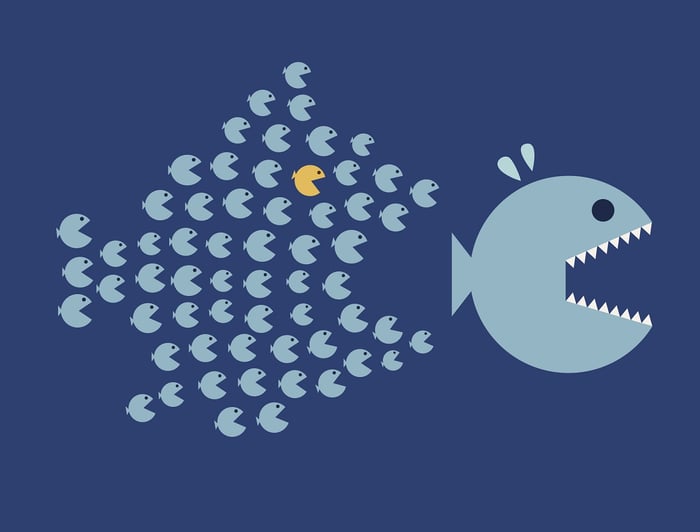 Most Vanguard index funds simply try to match the performance of an index, but a chosen few that include the Vanguard Small-Cap Index Fund (NASDAQMUTFUND:NAESX) become runaway successes and the envy of their category.

Over the last 15 years, Vanguard's fund has blown away the returns of competing small-cap ETF and mutual fund products, while trumping the performance of the Russell 2000 index, which is often referred to as the U.S. small-cap index.

The guts of the best small-cap index fund

The secret sauce of Vanguard's fund is that it tracks the little-followed CRSP U.S. Small Cap Index. To create the index, CRSP compiles a list of stocks by market capitalization (market value), then invests in the smallest companies that make up the bottom 15% of stock market value. Given that the largest stocks -- those that make up the S&P 500 index of large caps -- make up about 80% of stock market value, the CRSP U.S. Small Cap Index tracks just about everything outside the S&P 500. 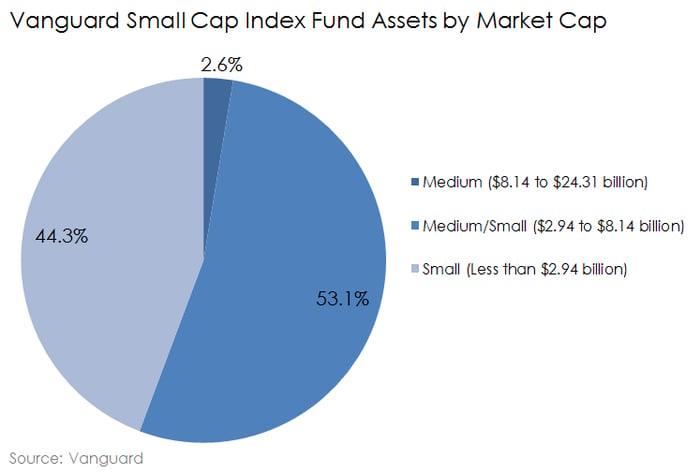 The majority of the fund's assets are invested in companies with market caps of less than $8 billion, with a median market capitalization of $3 billion. Note that the CRSP index weights each investment by market cap, so it weights most heavily the largest companies of the slice of small caps that are accepted in the index.

What it excludes is just as important as what it includes. Consistent with other CRSP indexes, the underlying index for this fund throws out companies with market caps of less than $10 million and requires minimum trading volume of its constituent companies, ensuring that it never gets in a situation where it is driving the bulk of buying or selling in any particular company. (At some point, some companies are simply too small, even for small-cap funds.)

This fund comes in many different mutual fund share classes, in addition to an exchange-traded fund. The most important difference between the share classes is the annual expense ratio, which ranges from as little as 0.05% to 0.20%.

The two least expensive share classes, Institutional and Institutional Plus, require minimum investments of $5 million and $100 million, respectively. But don't let these high minimums scare you away. High-minimum institutional share classes are frequently offered to investors in employer-sponsored retirement accounts including 401(k)s. Given that the only difference between these funds is the annual expense ratio, the least expensive option truly is the best option.

Tracking a little-known U.S. small-cap index has its advantages. In particular, the CRSP U.S. Small Cap Index benefits from the fact that that it is relatively unpopular. Note that Vanguard's ETF is the only ETF that tracks this particular index, and that all of its share classes have less than $62 billion of combined assets. That pales in comparison to the Russell 2000, which has nearly $30 billion of assets tracking it from one iShares ETF alone.

Process also plays a role in its relative outperformance. The CRSP index is rebalanced every quarter, whereas the Russell 2000 is reconstituted every June in a high-profile process that many believe leads to front-running by active managers. (Front-running refers to a process wherein a large investor buys a stock that will be added to an index, hoping to sell the stock at a higher price to other funds that have to own the stock when it is added to a popular index.) 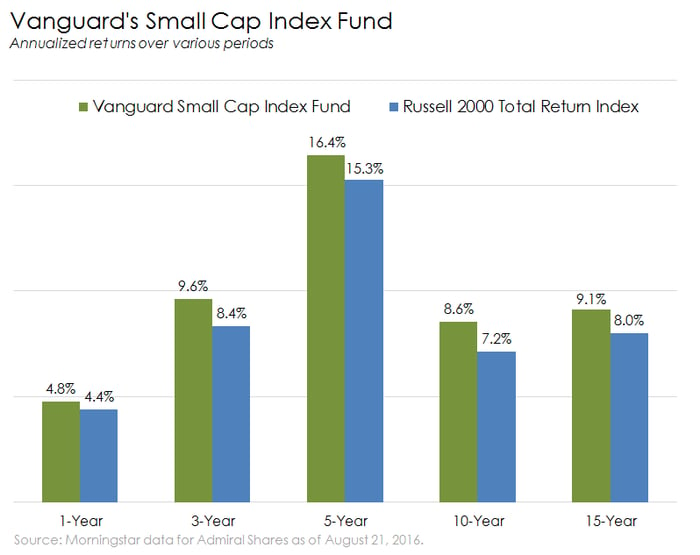 The chart above shows the clear advantage of the Vanguard Small-Cap Index Fund relative to the Russell 2000 in every single period. The performance differential is substantial, amounting to 1.1% annually over 15 years and 1.4% over 10 years.

I should caution that historical results are no guarantee of future performance. But the case for Vanguard's Small-Cap Index fund is a compelling combination of below-average fees and above-average historical performance compared to other small-cap index funds, making it a worthy contender for a spot in your portfolio.