Since going public in mid-2014, GoPro (NASDAQ:GPRO) has yet to stick the landing. During this time, the action camera company experienced numerous execution issues around pricing, a confusing product lineup, and upcoming product delays, all of which cast doubts on management's ability to drive sustainable growth. Additionally, demand for its action cameras appears to have waned, failing to captivate mainstream consumers in a similar vein as smartphones have.

All told, the stock is down over 50% from its IPO debut: 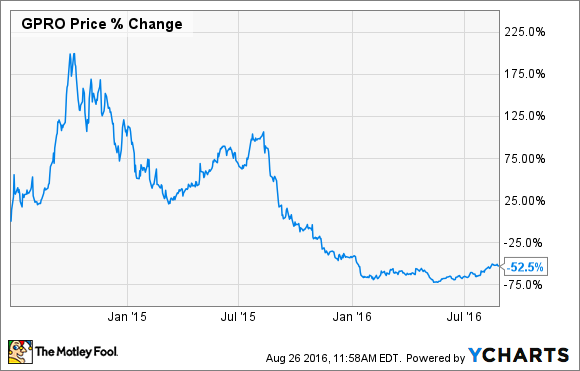 In addition to its falling stock price, there are three other signs that GoPro could benefit from a management shakeup.

GoPro annual sales growth has been falling at an increasingly faster rate with each passing year. Most recently, between 2014 and 2015, GoPro's revenue growth rate fell by over 50%.

While it's reasonable for a company's growth rate to slow as its sales base increases, the accelerated rate of decline is a cause for concern. It suggests that GoPro's cameras could be nearing a saturation point in terms of adoption, and could also indicate that management appears to be struggling with meaningfully growing the addressable market for its action cameras. Compared to 2015, management estimates that GoPro's 2016 full-year revenue will fall between about 7% to 17%.

Although there isn't anything inherently wrong with stock-based compensation packages, it looks bad for GoPro to heavily compensate its employees when its stock is down significantly. In other words, GoPro's employees' interests do not appear to be well aligned with shareholder interests. According to GoPro's second-quarter SEC filing, the company has an additional $169.4 million in unearned stock-based compensation, which it expects will be recognized in roughly the next three years.

After GoPro's pricing snafu and fallout with its HERO4 Session camera, which resulted in inventory writedowns and lower corresponding revenue, the company has taken a more measured approach to making new product introductions. Unfortunately, this approach has delayed its highly anticipated Karma Drone until right before the 2016 holiday season. Karma was originally planned to be released during the first half of 2016.

It's entirely possible that GoPro decided to delay its drone because it wasn't competitive enough, or the company faced manufacturing challenges. Reasoning aside, GoPro's decision to delay Karma strongly suggests that there was some sort of issue with introducing a new product, which reflects poorly on management's ability to execute and set expectations.

GoPro's management believes the second half of this year will be stronger than the first half. Consequently, it may be a bit premature to say that GoPro needs new management today. However, if GoPro doesn't close out 2016 on a high note, investors may lose their patience with management's judgment.

As a result of GoPro's dual share class structure, which features one vote for each A-class share and 10 votes for each B-class share, GoPro CEO Nick Woodman controls approximately 77% of GoPro's voting power. Since B shares do not trade on the open market, it'll be extremely difficult for shareholders to get a new CEO installed. Ultimately, if GoPro continues to struggle under Woodman's leadership, it's essentially up to Woodman -- and only Woodman -- to decide if it's time to pass the baton.