While some of us enjoy dreaming of getting rich quick via a strategy of cleverly buying and selling the right stocks at a furious pace, the truth is that individual investors who want to build wealth are better off sticking with a buy-and-hold strategy instead. In fact, the S&P 500 has yielded a total return of 108% in the last 10 years despite dozens of doomsday headlines and one of the worst recessions in decades occurring during the period.

Simply investing in an ETF that tracks the S&P 500 is perhaps one of the easiest long-term investing strategies you can follow, especially considering its average annual return of about 7% (when adjusted for inflation).

That said, there will always be individual stocks that greatly outperform their peers. These three each returned at least 800% in the last 10 years when dividends are included, meaning an initial investment of $7,000 in any of these three would be worth over $63,000 today. 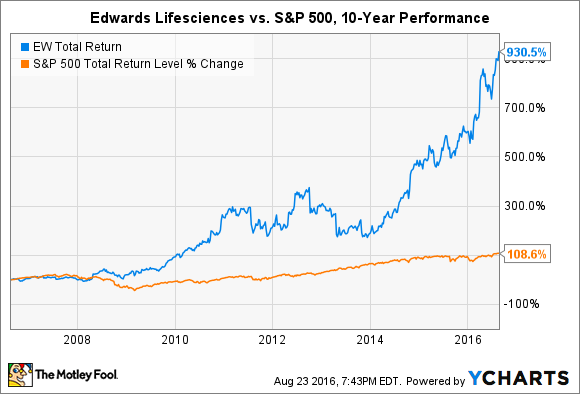 Edwards Lifesciences (NYSE:EW) has returned 930% in the last decade. The company was born in 1960 when Miles "Lowell" Edwards invented an artificial heart valve and successfully placed it into a patient -- and the company has been innovating in the same field ever since. After being spun-off from Baxter International in 2000, it has done one other thing: Return value to shareholders. In fact, it has returned over 3,350% in its life as a public company, and nearly 48% year-to-date.

The company is unlikely to provide another 10-bagger to investors from its current $25 billion valuation, but it isn't done growing just yet. Edwards Lifesciences has increased revenue from $1.9 billion in 2012 to $2.5 billion in 2015, representing growth of 31%, while EPS has increased 83% in the same period. Things are expected to be even better in 2016: Management is guiding for full-year sales and EPS growth of up to 20% and 24%, respectively. With steady growth, little debt, and products that will only become more important as the global population ages, Edwards Lifesciences is as reliable of an investment as you can find. 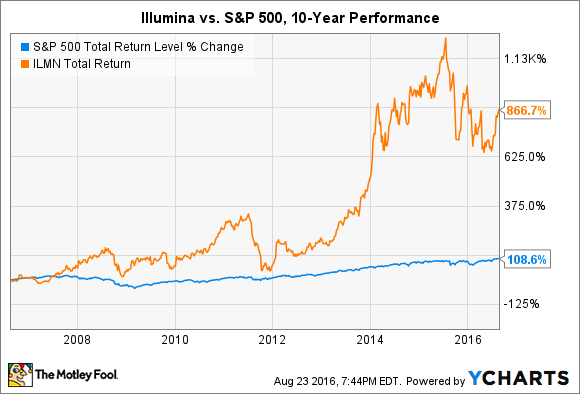 Illumina (NASDAQ:ILMN) has returned 866% in the last decade. It, too, began life as a publicly traded company in 2000, but for very different reasons than Edward Lifesciences. The United States announced a working draft of the human genome in 2000 as part of the Human Genome Project, which spawned the genetic sequencing industry. Today, Illumina is the unquestioned leader of the field for one simple reason: costs. Whereas the nationally funded Human Genome Project required an estimated $3 billion to reach its goal, technologies developed by Illumina can today sequence a full human genome for between $1,000 and $5,000.

The company's leadership position shows in its financial statements, which reflect the sales of devices (gene sequencers), consumables, and laboratory diagnostics. Revenue has increased from $1.15 billion in 2012 to $2.22 billion in 2015, representing growth of 93%, while EPS has grown 159% in the same period. The emergence of the engineered biology field and better biopharmaceuticals nearly guarantee that Illumina will continue growing for the foreseeable future, albeit at a slower pace. Management has guided for full-year sales growth of 12% and EPS growth of up to 12% for 2016. While the stock has had a rocky year-to-date performance -- losing nearly 10% -- the long-term potential of the $25 billion company remains strong. 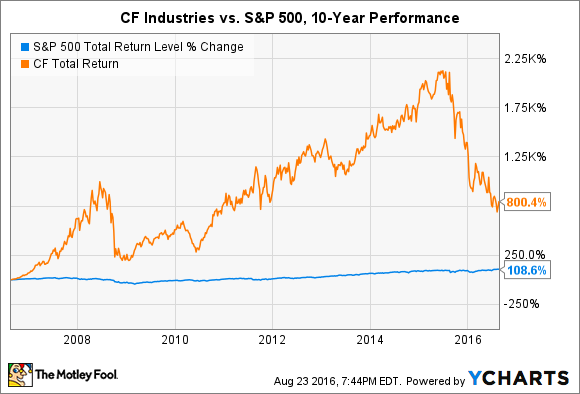 CF Industries (NYSE:CF) has returned 800% in the last decade. While the return in the chart above includes dividends, it also includes a precipitous slide encountered by all fertilizer manufacturers in the last several quarters. Selling prices for all three major agricultural nutrients -- nitrogen, phosphate, and potash -- continue to set new multi-year lows thanks to severe oversupplies and reduced purchases from farmers dealing with lower grain prices. As the magnitude of the drop from mid-2015 to the present in the chart above implies, the fertilizer industry is in a historic slump at the moment.

CF relies exclusively on nitrogen fertilizer sales, which has resulted in an even steeper drop in its stock price -- 56% in the last year -- than those suffered by its more-diversified peers. Why? Nitrogen fertilizer manufacturers have added capacity at a vigorous pace, and are expected to keep doing so well into 2017. Based on that simple fact, CF Industries doesn't expect prices to recover any earlier than 2018.

Market conditions are certainly challenging today, but the company's leadership position in the nitrogen fertilizer industry is allowing it to eke out profits nonetheless as it waits for better days ahead. And boy, good days in the nitrogen fertilizer industry are good. CF Industries reported revenue of $6.1 billion and EPS of $5.71 in 2012, compared to just $4.3 billion and $2.96, respectively, in 2015. Things will get worse before they get better, but value-hunting investors with an eye for the long haul may want to give the company a closer look.

What can investors learn?

These three companies present a small sample size, but they demonstrate a few hallmarks of successful investments. First, a buy-and-hold strategy was the only way to enjoy the gains listed above. If you bought and sold often over the last 10 years, trying to time the markets, then you likely wouldn't have turned $7,000 into $63,000 or more in these stocks. Second, each of these companies provides essential services and products. The world needed heart valves, genetic services, and fertilizers a decade ago -- and will still need them a decade from now. Third, all three could still represent great buy-and-hold opportunities today, even after their massive gains.