Please ensure Javascript is enabled for purposes of website accessibility
Free Article Join Over 1 Million Premium Members And Get More In-Depth Stock Guidance and Research
By Daniel Sparks - Aug 29, 2016 at 10:32AM

Here's a close look at Apple's dividend history and its dividend today.

Here's a look at Apple's dividend and its history.

Today, Apple is a strong dividend stock. While the company's dividend yield of about 2.1% is close to the average dividend yield of companies in the S&P 500, investors should note how low the tech giant's payout ratio is; paying out just 25% of its earnings today, there is significant room for Apple to increase its dividends in the coming years. Another way to look at how easily Apple could increase its dividend is by looking at its annual dividend payments and free cash flow. Of Apple's $50 billion of trailing-12-month free cash flow, it paid out just $12 billion in dividends.

In other words, Apple investors should expect plenty more dividend increases in the years ahead. Indeed, management has promised exactly this.

Apple resumed its dividend in 2012 at $2.65 per share on a quarterly basis. Notably, Apple's stock split 2-for-1 two times by the time it reinitiated its dividend.

Today, Apple pays a dividend of $0.57 per share on a quarterly basis. But investors should again note that Apple split its shares 7-for-1 in 2014. Without this share split, Apple's quarterly dividend payment today would be close to $4. 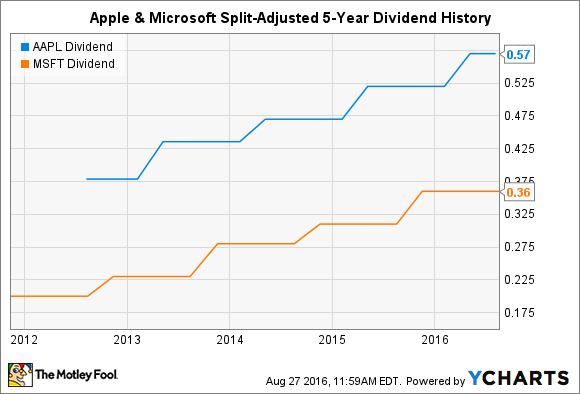 Apple's long stretch of not paying any dividends reflected Jobs' opposition to them. During Jobs' second tenure at Apple from 1997 to 2012, the tech giant didn't pay a single dividend, even as its cash hoard ballooned to over $50 billion in 2011.

"The cash in the bank gives us tremendous security and flexibility," Jobs said in 2010.

But by 2012, and after Jobs had passed the reigns to Tim Cook, Apple finally reinitiated its dividend, making it the company's first dividend since 1995. The combination of Jobs' passing in 2011 and a cash hoard exceeding $100 billion in 2012 marked the beginning of a new era for Apple. Overnight, Apple became a formidable dividend stock -- and it looks like it's going to stay this way.